In February, HTC announced the new HTC One, its latest flagship smartphone, and one that is set to replace the HTC One X+ and HTC One X on shelves in the United States. AT&T, Sprint and T-Mobile, along with Cincinnati Bell, have thrown their support behind the HTC One and they were included in a list of global operators that were said to be getting the device in the month of March. 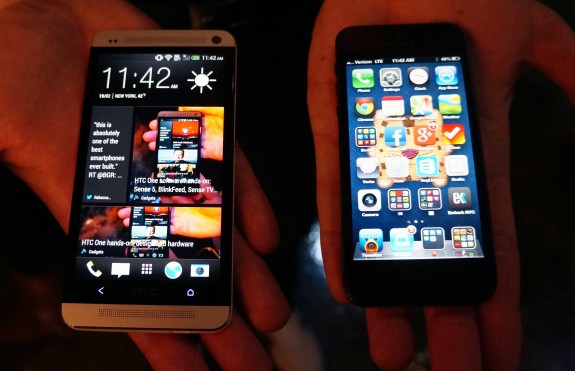 The HTC One next to the iPhone 5. The HTC One will apparently not be delayed in the U.S.

Yesterday though, a wrench was thrown into HTC’s global plans as the manufacturer stated that it “will start fulfilling pre-orders by end March in certain markets and will roll out to more markets as we approach April.” That likely means that some markets won’t see the device arrive until April. In the United Kingdom, the release, which was thought to be taking place on March 15th, has now been postponed until March 29th according to retailer Clove.

Those in the United States wondering if the delay might affect the release of the HTC One in the U.S. fortunately have some good news today as HTC Source, which has been accurate with HTC One details in the past, says that the HTC One U.S. release date will be unaffected by the delay since those models are on a separate timeline.

This means that there is still a good chance that the HTC One will arrive on AT&T, Sprint and T-Mobile in March as expected. However, given that the information is not an official announcement, it also leaves the door open on releases during the month of April. We’ve heard that March 22nd is a possible release date in the United States but thus far, none of the carriers have confirmed that to be the HTC One release date.

One saving grace is the fact that the fine print on T-Mobile’s sign up page still points to a release by March 31st though that could change just as fast as the page appeared back in February.

The HTC One is HTC’s latest flagship smartphone and it will be offering a number of high-end features including a 4.7-inch 1080p display, quad-core processor, Android 4.1 Jelly Bean, Ultrapixel camera, and the new HTC Sense 5.0.