This year’s Mobile World Congress has produced quite a few interesting smartphones. The big story of the show has been the arrival quad-core powered smartphones which are poised to go on sale for the first time. Those devices have been headlined by the  likes of the HTC One X and the LG Optimus 4X HD which are both running NVIDIA’s Tegra 3 quad-core processor.

However, the show hasn’t been all about quad-core. No, there have also been some other interesting announcements made at MWC 2012, one of them the HTC One V, a mid-range device that will be heading to the U.S. in the future.

The HTC One V is the low-end of the HTC One Series that the company announced at MWC. The series includes both the One X and the HTC One S which will be headed to T-Mobile USA.

And while the HTC One V is clearly a mid-to-low range device, there are still a number of things to like about it.

With that, let’s take a closer look at the HTC One V.

Instead, the One V employs a 3.7-inch SLCD2 screen with 480×800 resolution, a single-core 1GHz processor, and a 5MP rear camera. Not mind blowing by any stretch of the imagination but certainly capable.

Speaking of the design, we were able to go hands-on with the One V and found the design to be fantastic for a low-end device. It features an aluminum unibody design has a slight chin on the bottom.

In other words, it doesn’t feel cheap, which is fantastic because consumers won’t be breaking the bank to get it.

The color scheme is extremely dark.

Like the HTC One X and the HTC One S, the One V will be running Android 4.0 Ice Cream Sandwich out of the box. The OS, of course, is Google’s latest, and it’s arguably the best piece of mobile software that the company has released to date.

This will likely be the biggest selling point of the device. Sure, it doesn’t have the greatest specs, but it runs Android 4.0 right out of the box. And it’s cheap. It worked for LG’s Optimus One line and we can’t help but think that it will work here with the One V.

In addition, the One V will have HTC’s Sense 4.0 user interface over the top of Android 4.0. You can get a better feel for the UI by watching the video below which shows Sense 4.0 in action on the One X:

Sense 4.0 is arguably the best UI that’s included by a manufacturer and it definitely brings some likable things to the table. Things like convenient ways to organize or access your apps and widgets and some upgrades to familiar features like HTC’s custom Weather and Clock apps.

Like the other two phones in the HTC One Series, the One V’s destination, carrier-wise, has been confirmed. In fact, in the case of the One V, it’s actually destinations as a multitude of carriers are poised to offer the device.

HTC has confirmed that the One V will be headed to MetroPCS, Virgin Mobile and U.S. Cellular here in the United States. Unfortunately, the One V does not pack 4G LTE radios which means it’ll like be a 3G device on both MetroPCS and U.S. Cellular, both of which have 4G LTE networks in place.

One interesting thing to note is that Virgin Mobile doesn’t require a contract for its devices. So, it appears that Virgin will be offering the HTC One V off-contract, although it hasn’t yet made its plans clear. 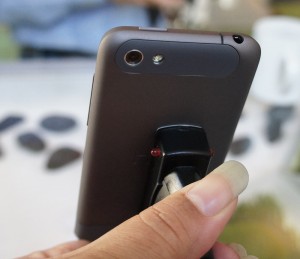 While the carriers appear to be set, the release of the HTC One V is not. The HTC One Series is scheduled to touch down on shelves starting in April and that means that we might see it arrive on all three destinations during that month.

It’s also possible that we might see a staggered launch with one carrier getting the device before the others but that remains to be seen.

Be sure to check back as we’ll fill you in when we know an exact HTC One V release date.

Like the release date, pricing for the HTC One V remains a complete mystery. We’re fairly certain, judging by the device’s specs, that it will be a budget smartphone which means it will appeal to those that aren’t up for shelling out the big bucks for one of the high-end phones.

We expect pricing to be fairly similar at MetroPCS and U.S. Cellular. However, Virgin Mobile might offer something vastly different because it offers up phones off-contract.

One of the carrier’s flagship devices, the HTC Wildfire, is currently available for a mere $180 off-contract.

So don’t be surprised to see the HTC One V arrive for something similar.