From the looks of things, Google’s new Nexus 5 is going to be making an appearance in the near future, appeasing those who have been waiting all year for a new Nexus smartphone. When it does finally arrive, it will be doing battle with a number of devices including the HTC One, HTC’s current flagship that is not only available on an assortment of U.S. carriers but is also found on the Google Play Store.

All the way back in February, HTC hosted a big time event in New York City wherein the company announced its HTC One X successor dubbed HTC One. The HTC One launch got off to an extremely slow start as the company was forced to delay the release of its flagship into April alongside the Galaxy S4. However, when the device arrived, it was well worth the wait.

Of course, it still has another challenger to face in the form of the Nexus 5, Google’s rumored, but almost official, Nexus smartphone that will be coming to replace the Nexus 4 on the Google Play Store. The Nexus 5 has seen a number of leaks in recent weeks, all of which have painted a picture of a big time smartphone and one that will compare to the juggernauts of 2013.

Here, ahead of its release, we take a look at how the heavily rumored Nexus 5 should stack up against the wily veteran, the HTC One.

The HTC One has been on shelves for awhile now as it arrived all the way back in April in the United States. The Verizon HTC One experienced a bit of a delay and did not arrive until August. All four of the HTC One’s biggest service providers in the U.S. which includes AT&T, Sprint, T-Mobile and Verizon currently have the HTC One in stock and it should remain in stock throughout the rest of the year and well into 2014. 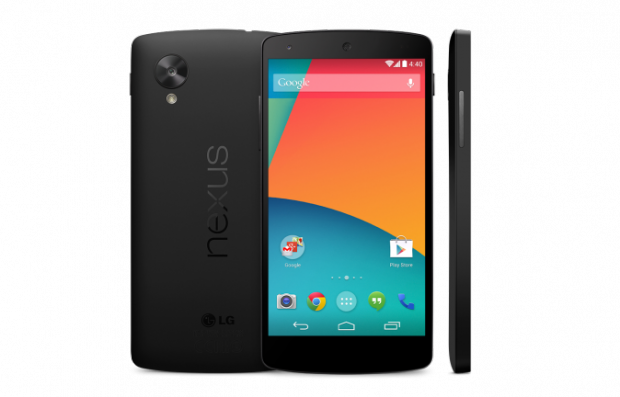 The Nexus 5 release date, however, remains up in the air. Leaks have suggested October 31st and November 1st and sources have told us that the device will be announced tomorrow morning and could possibly go on sale shortly thereafter. This would not be surprising given that the device has leaked out countless times since the first rumor emerged several months ago. 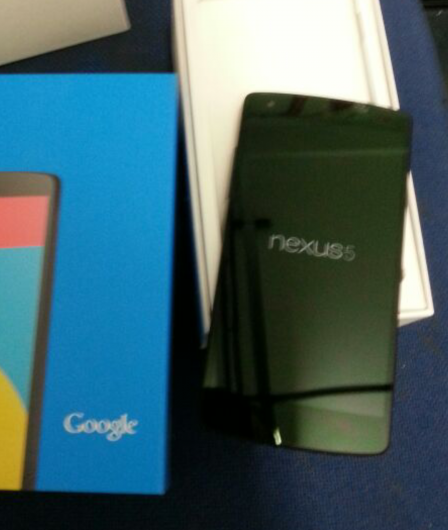 The Nexus 5 unboxing photo below comes from the UK, where an employee of an un-named company posted then removed this photo.

At the very least, we should see an announcement in the next few days, an announcement that should reveal a specific release date. And at the moment, we wouldn’t be surprised to see it go on sale tomorrow shortly after it makes its debut.

The back of the HTC One is cut out of a single block of aluminum and the company fills in the gaps with a soft-touch plastic that adds a little grip to the sides of the device and highlights the overall design. Rather than squaring off the corners like the iPhone 5, HTC keeps the HTC One a little bulkier, but uses that bulk to deliver a curved back that feels natural to hold. 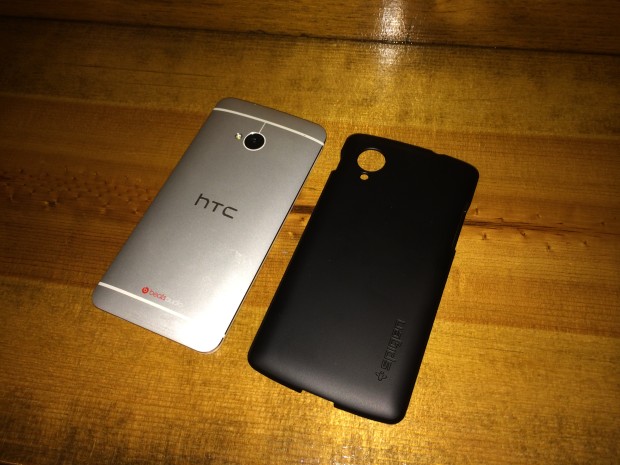 It’s not as thin or as light as a phone like the iPhone 5 but it still checks in at a slender 9.3mm thin and weighs 143 grams.

The Nexus 5 looks like it’s going to be made of plastic, though, it looks like the plastic will be of the premium black matte variety that we’ve seen Google employ on the Nexus 7. This should help to make it more durable than the Nexus 4’s glass black and make it much closer to the HTC One in terms of quality.

This other photo depicts the case and the HTC One laying down, offering a glimpse at how their profiles might look next to each other. Again, both should be very pocketable and easy to use with one hand.

The HTC One comes with one of the finest displays in the business. Checking in at 4.7-inches in size with 1080p resolution at 469 pixels per inch, the HTC One’s display makes content like video, photos, text and more look absolutely stunning. Better yet, those who play a lot of games on their device are simply going to love how they look. 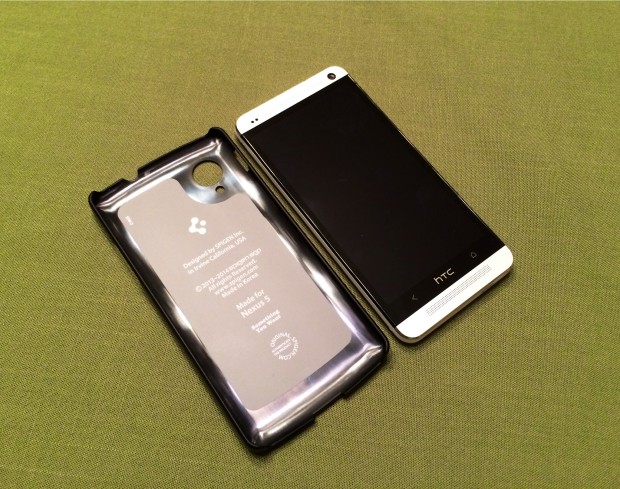 Google’s Nexus 5 display is going to be on par with the HTC One’s display. It’s all but confirmed to have a 5-inch display with 1080p resolution at 441 pixels-per-inch. It’s also going to offer some spectacular looking photos, video, web, and games and it should be comparable to the HTC One screen. 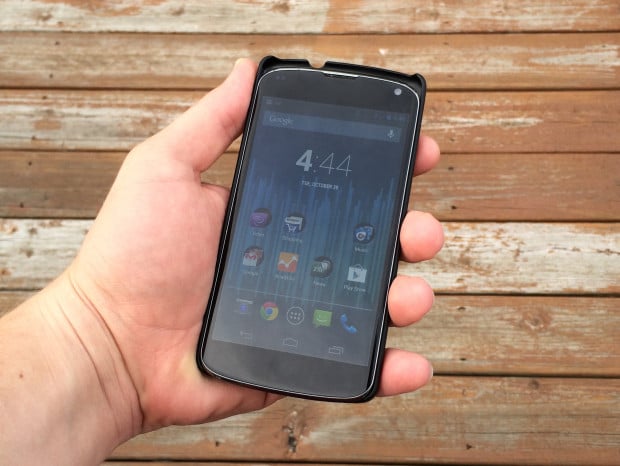 The above photo offers users a look at how big the Galaxy S4 display looks next to the HTC One. The Nexus 5 display should be around the same size as the Galaxy S4’s display.

Beyond the display and design are a number of other specifications that will help power the HTC One and Nexus 5. Starting with the HTC One, it pairs a 1.7 GHz quad-core Snapdragon 600 processor with 2GB of RAM, both of which help to offer fantastic performance when it comes to gaming. The battery on the HTC One is a 2,300 mAh battery that while decent, is certainly not best in class.

Unfortunately, the device does not come with a removable back which means that users can install their own extended battery. Another drawback in the spec department is the device’s storage. AT&T holds an exclusive over the 64GB HTC One while the other carriers offer 32GB models. And because the device offers no microSD card slot, uses are stuck with that storage and the cloud. 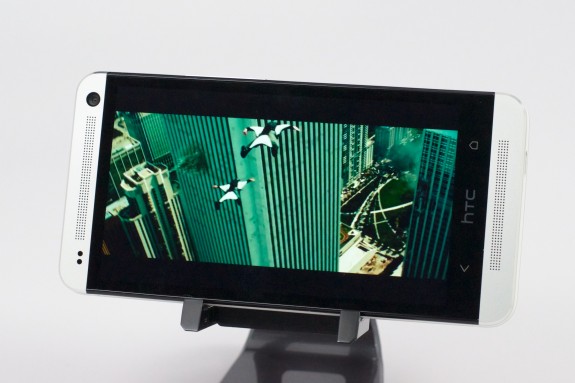 As for the Nexus 5, it’s coming with a Snapdragon 800 quad-core processor, a next-generation chip that should deliver better all-around performance than the Snapdragon 600. The device is expected to come with a 2,300 mAh battery and like the HTC One, it’s unlikely to have a removable back, meaning, users won’t be able to install their own.

Storage-wise, the Nexus 5 will come in two styles, 16GB and 32GB, and like the HTC One, it won’t have a microSD card slot for expanded storage. Instead, it will rely on on board storage space and the cloud.

The HTC One was recently updated with Android 4.3 in the United States though the Verizon HTC One still is on Android 4.2 Jelly Bean and will be for the foreseeable future. Of course, Android is only a small piece to the puzzle as the HTC One runs a heavily modified version of Android with something called Sense 5 over the top.

Unlike the cartoon feel of Samsung’s TouchWiz, Sense 5 offers users a straightforward look with sleek icons and useful features like HTC BlinkFeed, a home screen that pulls in content from Facebook, Twitter and a variety of sources to deliver a rich news feed and HTC Zoe, a feature that captures 20 photos and a 3 second video clip that allows users to share a living moment. Those who are unfamiliar with Sense 5 will want to watch the video below for an in-depth look at the software.

The Nexus 5 is almost certainly coming with Android 4.4 KitKat, an update that is said to be an incremental update to Google’s Android operating system. While KitKat will likely offer new functionality and some user interface tweaks, it’s not going to be a massive overhaul from Android 4.3 Jelly Bean. It will, however, look vastly different than the software on the HTC One.That’s because the Nexus 5 will run a vanilla version of Android that is untouched by the manufacturer. In other words, it won’t have a skin over the top of Android.

In addition to vanilla software, the Nexus also has another perk that should entice buyers. Software updates that come straight from Google itself. Those who are looking for this kind of speed will want to take a look at the HTC One Google Play Edition though it’s far more expensive than the regular old HTC One.

The HTC One is available on four of the largest carriers in the United States. AT&T, Sprint, T-Mobile and Verizon are the HTC One’s biggest providers and they offer the device on their 4G LTE network. The HTC One Google Edition comes with support for AT&T and T-Mobile but shuns the CDMA carriers, Sprint and Verizon Wireless.

As for the Nexus 5, all signs point to the device coming to AT&T, Sprint and T-Mobile with Verizon and U.S. Cellular out of the picture. That’s still not confirmed but we would be shocked if the device came to any carriers other than those three, at least at the start.

The HTC One price is all over the board at the moment. At AT&T, the 16GB model is now $150 on-contract while the exclusive 64GB model is still on sale for $300 on-contract. Verizon, which launched the HTC One much later in the year, is currently offering it for $150 as well. Of course, those looking for deals will find them.

Places like Amazon and Wirefly are offering the HTC One up for cheap, extremely cheap, and we expect the price to dip even lower in the next few weeks after the Nexus 5 debuts and Black Friday gets closer. We wouldn’t be surprised to see the HTC One offered for free through some retailers as a promotion. That’s not confirmed but we’ve already seen the HTC One dip that low before so it’s bound to happen again. 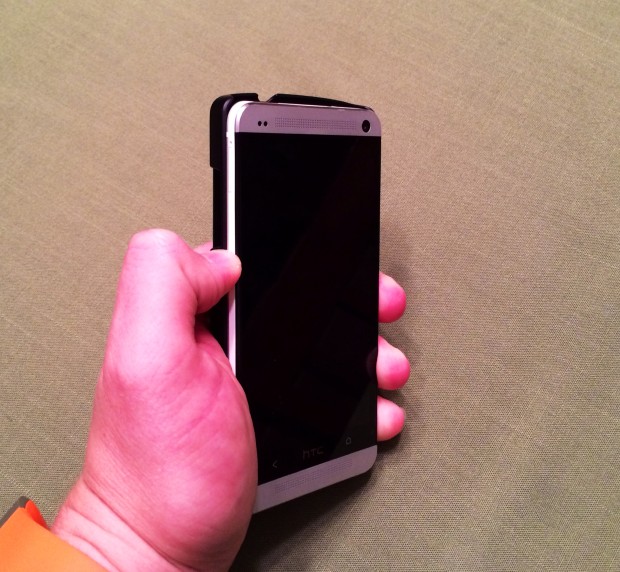 Google’s HTC One is still $599 through the Google Play Store and we don’t expect that to change once the Nexus 5 arrives. Google hasn’t shown a willingness to adjust pricing at retail so don’t look for that to change.

As for the Nexus 5, well, it will come unlocked and it will be coming for $350 and $400 for the 16GB and 32GB variants respectively. How do we know that? Thanks to the device showing up on the Google Play Store. This price point, while more expensive than the Nexus 4, will be much cheaper than other unlocked smartphones. The Verizon HTC One, for example, is $550.