The HTC One Max is rumored to be joining the HTC One and HTC One mini later on this year and today, a purported photo of the HTC One Max has surfaced, showing just how big the device might be compared to HTC’s other One models.

In April, HTC released the 4.7-inch HTC One into the wild to battle the likes of the iPhone 5, Samsung Galaxy S4, Galaxy Note 2 and the Sony Xperia Z. At the time, it was unclear whether HTC would released any new One models.

As the weeks went on though, rumors suggested that it did in fact have other One branded devices up its sleeve. 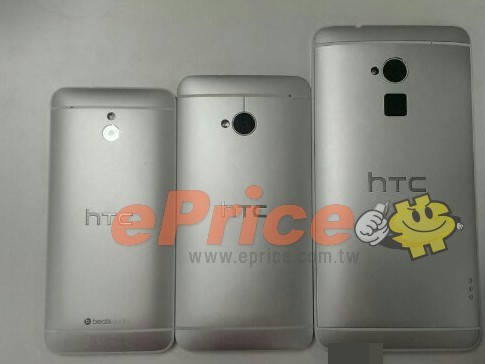 The first came in the form of the HTC One mini, a smaller version of the HTC One that features a 4.3-inch display, some lesser specs, but keeps the metal design of the flagship. The device, and its cheaper price tag, are aimed at budget shoppers and those looking at buying phones like Samsung’s Galaxy S4 mini.

The other still unreleased device is the HTC T6, also known as the HTC One Max. The HTC One Max is expected to be a Galaxy Note 3 competitor and come with a massive 5.9-inch 1080p display, speedy processor, Ultrapixel camera, metal design and quite possibly, support for Verizon’s 4G LTE network. The device, which has shown up in photos prior to today, is a massive HTC One.

Today though, the HTC One Max has shown up in a photo that depicts just how big it really is. The photo, from ePrice, shows the HTC One Max paired with the smaller HTC One and the HTC One mini. Interestingly, the backside of the HTC One Max has a mysterious black square underneath the camera. Speculation suggests either a sticker or a fingerprint reader but neither is confirmed. There are also three marks near the bottom of the device that could be a type of connector. It’s unclear and neither feature showed up in the HTC One Max press render that has come under fire recently.