While the big news today is certainly the iPad 3 announcement date getting revealed, we should not forget that there is a massive mobile conference going down in Barcelona. That conference is of course called Mobile World Congress and thus far, we have seen quite a few impressive devices come out of it. One such device is the HTC One X, a smartphone that HTC hopes will change its fortunes in 2012.

Earlier this year, the company confirmed that it would be shifting its 4G LTE smartphone focus from quantity to quality and better battery life. Translation: HTC wants to make better devices that hopefully sell better then its phones of yesteryear.

At MWC, the company unveiled the first part of that plan called the HTC One Series.

The HTC One Series is comprised of several phones that have One in their names. We have the HTC One X, HTC One S and the HTC One V. All three bring something to the table but it’s clear that the company will be marketing the HTC One X as its flagship smartphone.

And for good reason.

And what makes it such an attractive smartphone option?

We were able to go hands-on with the HTC One X and HTC Sense 4.0, the new user interface that HTC has put over Android, and we came away very impressed. You can have a look at the One X for yourself in the video below: 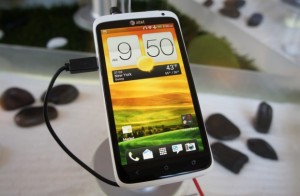 The focus of Mobile World Congress has been on NVIDIA’s quad-core Tegra 3 chip. This is the first time that we have ever seen quad-core powered smartphones and they figure to be the focus of the smartphone world in 2012.

NVIDIA’s processor brings five cores to the table. Four main cores and a fifth ninja core. NVIDIA has advertised this as 4 + 1.

Those four main cores are used to handle more intensive tasks like gaming, Adobe Flash video playback, and encoding or decoding of high definition videos. That fifth core is a low-power core that is used to handle basic tasks, like retrieving email or operating in standby mode

The HTC One X is fortunate enough to have a quad-core processor on board.

You see, there are two versions of the One X. One for international customers, one for AT&T in the United States. AT&T’s version is going to employ a Qualcomm Snapdragon dual-core processor, the reason being, NVIDIA’s Tegra 3 currently does not support 4G LTE. It will in the future, but AT&T wants to get this phone out onto the market.

So again. The international version has a Tegra 3 processor and 3G capabilities while the AT&T One X has a dual-core processor and 4G LTE data speeds which can get up to 10 times faster than 3G.

Besides that difference, the phones are the same.

It has a 4.7-inch 720p HD display with Gorilla Glass, an 8MP rear camera, 1.3MP front-facing camera for video chatting purposes, 1GB of RAM, an HDMI connector for TV-out, and an extremely thin design which checks in at 9.5mm.

That thin design is a vast departure from the bulky designs that accompanied HTC’s 4G LTE phones last year.

As expected, the HTC One X will be running Android 4.0 Ice Cream Sandwich out of the box when it arrives internationally and on AT&T. However, it will have something on board that will make it different from the other non-HTC Android 4.0 phones announced at MWC.

HTC Sense 4,0 is going to bring quite a bit new along with it including a new app drawer, a new drop-down menu for widgets, a re-skinned Recent App list, and a bunch of enhancements to Sense’s usual widgets like Clock and Weather.

Sense is better than the other UI’s that manufacturers put on their Android devices but it means that those looking for a vanilla version of Android will have to look elsewhere. 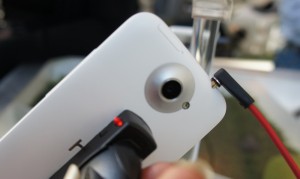 HTC unfortunately has not confirmed any specific dates for the HTC One X’s launch in the United States or overseas. However, it did go ahead and confirm launch window for the Android smartphone.

The device is expected to launch at some point during the month of April.

Earlier today, it became apparent that it might launch on April 5th in the UK, this according to a pre-order listing on Amazon.

The HTC One X will be headed to Vodafone, Orange and T-Mobile, at the very least, in the UK.

Also, for those in the U.S., Best Buy has apparently started taking stealth pre-orders for the HTC One X, even though it doesn’t expect units to arrive until April.

That same Amazon listing has the device listed for £529 which translates into around $840 U.S. dollars.

Clearly, AT&T will not be asking for that much, at least not on-contract. As of yet, the American carrier has not revealed how much the device is going to cost but, we can definitely take a guess.

The Samsung Galaxy Note, which just launched on AT&T’s next-gen network, launched for $299.99.

So, those of you looking to get the HTC One X should be prepared to pay an amount in between $200 and $300 for the HTC One X when it arrives during the second quarter of this year.