HTC’s flagship One X Android phone is now available on AT&T for $199 on two-year contract.

The HTC One X features a 4.7-inch 720p display with a dual-core Snapdragon S4 CPU. It uses Android 4.0 Ice Cream Sandwich with HTC’s Sense 4 skin which adds a few features including a new lock screen.

One of the biggest draws of the HTC One X is the 8MP rear-facing camera. Using HTC’s Image Sense technology users can use the camera to shoot 1080p video and take still photos at the same time. The camera also has a burst mode option that takes a series of photos, letting the user choose the best of the bunch. The camera apps also offer a selection of Instagram-esque filters. 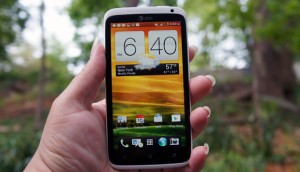 The HTC One X is arguably one of the best Android phones available on the U.S. market, and will likely be at the top until Samsung’s Galaxy S III comes to the U.S., though that phone hasn’t impressed everyone so far.