Originally announced at the Mobile World Congress, the LG Optimus 4X HD figures to be LG’s first flagship Android device of 2012. And while the company still hasn’t shared a release date for the quad-core powered smartphone, some impressive benchmarks have surfaced which will probably make consumers hope for something official soon.

Both devices pack a Tegra 3 quad-core processor from NVIDIA and both phones put up some numbers in both the Quadrant and the AnTuTu benchmark tests. 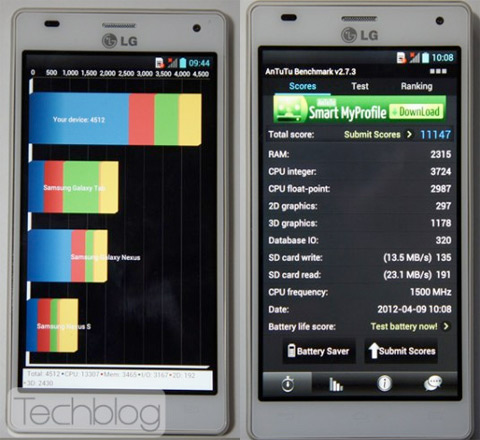 Suffice to say, LG’s device is no slouch in the hardware department. However, consumers should temper their expectations as LG”s history with software is littered with issues.

As Engadget points out, the Optimus 4X HD’s pre-release software struggled, struggles that were apparently caused by LG’s laggy user interface which is layered over the top of Android.

Hopefully, LG makes improvements to the final version or, better yet, decides to can the UI all together leaving a vanilla Android experience.

The LG Optimus 4X HD is expected to arrive in at some point in May, long after the release of the HTC One X, which arrived this month.

As for a release in the United States, the phone is expected to arrive on T-Mobile at some point in the future.