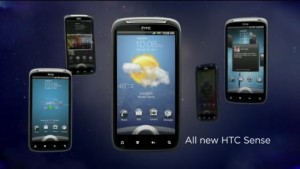 At a Google I/O 2011 after-party co-hosted by Sprint and HTC for the HTC EVO 3D, HTC PR reps announced that the company will release an SDK to the Android development community to open up HTC Sense 3.0. The newest version of HTC Sense was announced alongside the HTC EVO View 4G and the HTC EVO 3D smartphone at CTIA, and features a cycling 3D carousel to navigate around your homescreens and widgets, a way to launch and open apps from the home screen, and attractive widgets and shortcuts that appear to be deeply integrated with Google’s Android operating system. Unlike some third-party launchers and widgets, HTC Sense takes a deep level of personalization and customization and seamlessly integrates that experience with Android’s OS and has been called one of the most usable, attractive, and well designed Android experiences on the market. Now, developers who develop other apps and widgets can tap into HTC Sense so that their products look like they’re part of the Sense experience.

While the company has developed a number of widgets for the HTC Sense home screen–calendar, clock, contacts, a widget for integrating with social networks like Facebook and Twitter–other third-party developers can create their widgets so that they look like they were created by HTC and were designed for the Sense experience. For instance, right now on my HTC Thunderbolt, I have a widget for Google Voice that has a different look and feel to it that looks like it was a mis-match for my HTC Sense-enabled phone. In the future, Google and other third-party apps can develop widgets with a Sense-native feel.

Additionally, with HTC Sense, the level of personalization is high. For example, with a few taps, I can change the chrome–or the trim–around all of my widgets in an instance. Want a more  minimalist look? Apply a black or stainless steel chrome. Want a more elegant and bold look? Try a chrome with wood trim. These options will also be available to third-party widgets in the future to make them look like they’re part of the native Sense experience.

While the news in and of itself isn’t that remarkable, it is a nice visual step to creating an overarching experience on Android that’s unified and refined without HTC having to go out and create their own mobile operating system. As there are different chromes for widgets and different styles of widgets across different phone manufacturers, HTC is hoping to woo users with a more complete, inclusive Sense experience by courting third-party developers to create widgets that look native to the company’s design ethos.