HTC is now rumored to be planning a new smartphone that would be launching a smartphone later this year utilizing amorphous metal alloy materials, or Liquidmetal, in a bid to replace its all-aluminum HTC One. Report of the switch in material was delivered by Digitimes, which has a mixed track record on rumors.

The publication says that HTC will be partnering with Jabon International for the chassis supply and has recruited a Japan-based research and development team for the project. 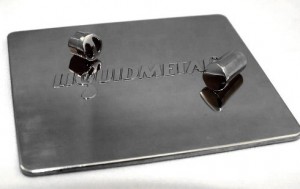 Liquidmetal is under a contract exclusivity with Apple. Though Apple has still not delivered a phone, tablet, or notebook utilizing the durable metal substance, Apple has been using Liquidmetal for its SIM card ejector tool. The alloy allows the tool to not bend or break, even under heavy pressure.

In the past, though Apple was rumored to be developing a Liquidmetal phone, it was speculated that the cost was not there yet to build a product and that making a larger chassis–a footprint that is far greater than the SIM ejector tool–was still not feasible.

However, Liquidmetal in a phone may not arrive as soon as these rumors may have you believe. Right now, as Apple and Nokia are recently switching from polycarbonate to aluminum housing, consumer demand is still strong for aluminum.

HTC’s chassis partner Catcher Technology says that it has not heard that HTC would be switching to Liquidmetal, further dampening the rumors.

HTC has been innovative in its selection of parts on phones in the past. The company has used ceramics for its phones and has more recently switched to its zero-gap construction for the aluminum-clad HTC One. However, given that Apple had renewed its exclusive agreement with Liquidmetal, the company, for its technology, HTC will have to develop its own amorphous metal alloy or wait for Apple’s exclusivity to end before it can use the substance.