Canadian wireless carrier Rogers is speculated to debut the HTC Raider, a smartphone also known by its HTC Holiday code name, soon. The 4G LTE smartphone will join the Galaxy S II LTE smartphone on the carrier’s faster 4G network. The device is expected to cost $149 with a three-year service agreement though contract-free pricing is not yet available. 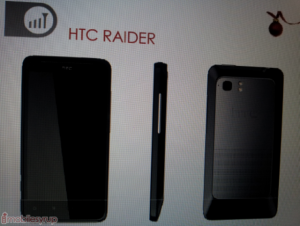 The HTC Raider will launch with Android 2.3 Gingerbread and will have a 4.5-inch qHD resolution display, an 8-megapixel rear camera that’s capable of 1080p full HD video recording, and will be a dual-core smartphone.

The carrier had announced the Galaxy S II LTE smartphone recently as the first LTE smartphone for its network. That phone is speculated to come on November 4th for $199.99 on a three-year contract.

Pricing and release date for the HTC Raider is not currently known at this time.

The HTC Raider is also expected to come to AT&T‘s network in the U.S.