Just a short time ago, Motorola announced the upcoming Motorola Droid RAZR, a 4G LTE smartphone that will, at least for the time being, be able to claim the title as thinnest smartphone in the world. It’s a mere 7.1mm thin. Incredible if you think about how clunky the previous 4G LTE releases have been. It was an exciting event but it would have been more exciting if we had gotten an official release date for the Droid RAZR.

Instead, we got pricing ($299) and we got a launch window, a world wide launch in November. Nothing specific to look forward to though. Well, that internal document from Droid-Life which listed a possible Galaxy Nexus release date also includes the Droid RAZR and another upcoming 4G LTE device called the HTC Rezound aka HTC Vigor.

If Verizon stays true to these tentative dates, yes they are tentative, all three devices will be launching on November 10th. It’s possible but we wouldn’t count on it becoming a reality. 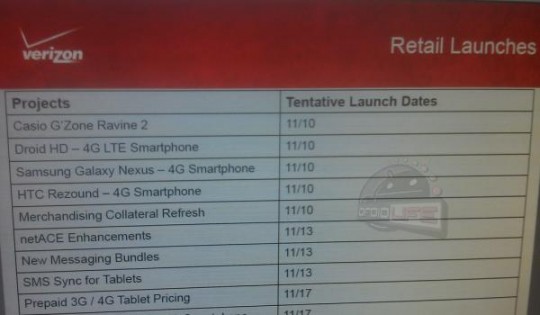 Still, it’s nice to know that we’re probably just a couple of weeks out from some pretty incredible phones being released on Verizon’s 4G LTE network.