The HTC Rezound Ice Cream Sandwich update has been approved by Verizon and the roll out to all HTC Rezound owners should arrive soon.

We have heard from several people who say that they have already received the update but it appears that the update might be in the midst of a soak test and not a massive roll out as we have also heard from HTC Rezound owners who haven’t yet seen the Ice Cream Sandwich update.

And now it would appear that the roll out to everyone is on the horizon as Verizon has posted the update’s details on its website, a sign that a roll out has been approved and is on the verge of rolling out.

The update will bring the HTC Rezound owners Android 4.0 Ice Cream Sandwich, an update that owners have been waiting for since December of 2011. 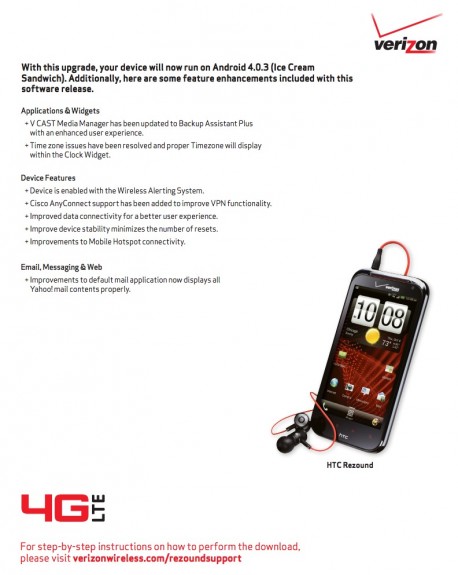 The HTC Rezound ICS update is ready to roll out.

That means that Rezound owners will finally get a taste of the new ICS UI, Face Unlock, and more.

The entire update is massive, 299MB in size, which means that it will take awhile to download and install. It’ll take the phone up to Android 4.0.3, not Android 4.0.4 ICS, and it will take Sense to Sense 3.6.

Yesterday, it became clear that HTC and Verizon had missed the imposed deadline for the HTC Rezound. HTC had said it would roll out by the end of July and the company was unable to keep that promise. It still has not explained why though we assume it either had to do with bugs or the fact that a bunch of devices have been getting ICS.

Either way, the update is closer than ever and it should be rolling out in a matter of hours or days to everyone, not just those that are part of the initial batch.

Anyone see it yet?