It’s not everyday that a manufacturer jumps the gun and posts official Android 4.0 Ice Cream Sandwich info on its website but that’s exactly what HTC has done with the HTC Rezound which means that an Ice Cream Sandwich release date might just be right around the corner.

Droid-Life spotted the listing on HTC’s website which plainly stated that HTC Rezound Ice Cream Sandwich update was available and ready to download. This was just a short time ago.

The company has since taken down the listing and reverted the page back to its previous incarnation which doesn’t list Ice Cream Sandwich for the Rezound anywhere. 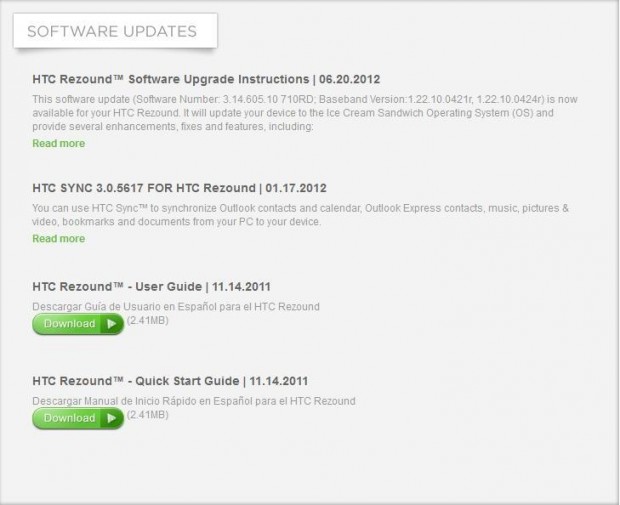 HTC’s original listing not only listed the update but it also listed the entire changelog for the update. Besides Android 4.0 Ice Cream Sandwich’s features, it will be coming with a host of fixes and enhancements that should make the experience on the device an even better one.

The process is also going to take around 70 minutes to complete. After the software is installed, the HTC Rezound should be a new and improved smartphone.

Problem is, we still don’t know when HTC and Verizon plan on rolling the update out. We think this is a good indication that something good is on the way, we just can’t say when Ice Cream Sandwich is going to arrive exactly.