Verizon has approved a new update for the HTC Rezound which will be adding global roaming support to the aging Android smartphone but won’t be bringing the features to Android 4.1 Jelly Bean, an update that has been missing in action and one that likely will never roll out.

As it typically does ahead of Android update roll outs, Verizon has approved a new update for the HTC Rezound on its website which means that the device, which was overshadowed by the HTC One X and One X+, will be getting an update in the near future. Generally, updates roll out soon after approval which means that Rezound owners should see something arrive in the not-so-distant future. 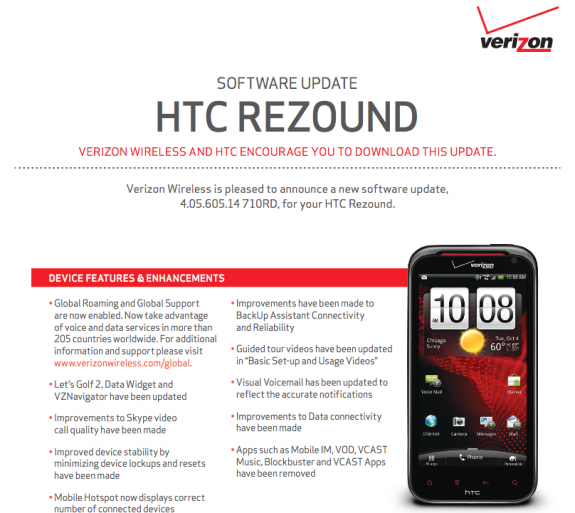 The HTC Rezound is getting an update. Only, it isn’t Jelly Bean.

That said, the update is not the missing Android 4.1 Jelly Bean update that Rezound owners have been hoping would roll out to owners. Instead, it’s a bug fix, enhancement update that will be fairly massive in size, just over 200MB, and will be bringing a number of improvements to owners of the smartphone.

At the top of the list are support for global roaming, perfect for those that like to take their device overseas, and improvements to data connectivity and device stability. Verizon says that the update will minimize lock ups and resets that owners have been enduring with the current software.

It’s an essential update yet it’s probably not the update that owners are looking for. That of course goes to Android 4.1 Jelly Bean, an update that remains missing for HTC Rezound owners and one that may never roll out.

We’ve heard, in the past, that the HTC Rezound will remain stuck on Android 4.0 Ice Cream Sandwich. HTC has never confirmed this, nor has Verizon, so there is still a chance that it could get an update. However, at this point, given its age, and given how many other devices Verizon needs to update to Android 4.2, we imagine that its chances of ever seeing Android 4.1 are unlikely.