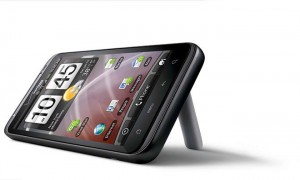 While the HTC Thunderbolt’s release date has been up in the air following the phone’s announcement at CES last month, a reliable source to IntoMobile is saying that the device is expected to land in Verizon Wireless and at Best Buy on February 24th. The Thunderbolt marks the first 4G LTE smartphone on the carrier’s network, but will be joined by other Android smartphones with 4.3-inch displays from Samsung, LG, and Motorola in the future.

The Thunderbolt is expected to be a rival to Sprint’s EVO 4G smartphone, also made by HTC. Both devices share some common traits, including supporting the HTC Sense user interface, a kickstand that focuses on a multimedia experience, 8-megapixel camera with LED flash and HD video encoding, and a 4.3-inch capacitive touchscreen display.