Best Buy’s weekly circular ad has three nice phones on its back cover. Unfortunately, the HTC Thunderbolt, perhaps the most desired out of the three, still isn’t available and Verizon still hasn’t announced an official release date for the 4G LTE phone. Best Buy is still advertising the $299.99 on-contract price.

The HTC Thunderbolt is the first phone announced for Verizon’s speedy 4G LTE network. While no official release date has been announced by Verizon,ads such as these and some other missteps are frustrating many Thunderbolt fans. Best Buy began taking $50 pre-order deposits for the Thunderbolt back on February 6. The 30-day return window for those deposits, issued in the form of a gift card, is about to expire. 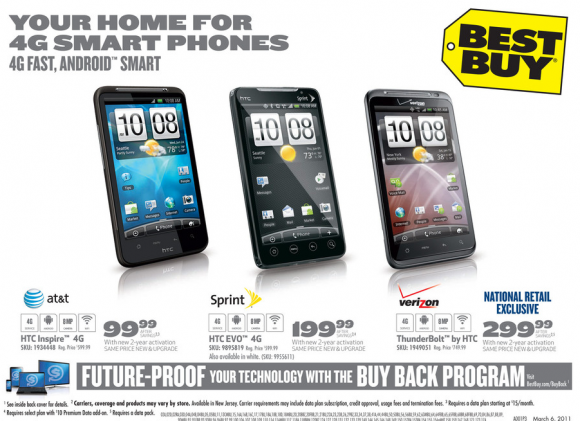 As you can see in the Flash version of the Best Buy ad, the Thunderbolt is being compared to the HTC Inspire 4G on AT&T and the HTC EVO 4G from Sprint. The Thunderbolt’s pricing may look out of line for most consumers considering all three of these phones have nearly identical home screens and are all ‘4G’. Hopefully Best Buy’s reps will be able to clearly articulate the reasons behind the price premium for the Thunderbolt.

The HTC Thunderbolt was featured in last week’s Best Buy weekly circular as well, ahead of a rumored March 4 release date. The latest guesses point to a March 10 (this Thursday) release date, but Verizon has yet to set an official date. In fact, Verizon’s asked Thunderbolt fans to move on to other topics in what seems to be a bit of frustration.

The HTC Thunderbolt ads previously published on the Verizon Wireless YouTube channel were pulled. HTC is running a Thunderbolt television ad nationally ahead of its launch.

This is a hands-in video of the HTC Thunderbolt at CES 2011. In this demo, our own Chuong Nguyen goes through some of the Thunderbolt’s features and the Sense interface.

You can learn more about the HTC Thunderbolt here.