My family and I are on our summer road trip across the Southeastern US and my HTC Thunderbolt has been a wonderful companion but has one major problem – charging it while watching video in portrait mode with the phone propped up by the built-in kickstand is awkward due to poor placement of the charging port (see below). 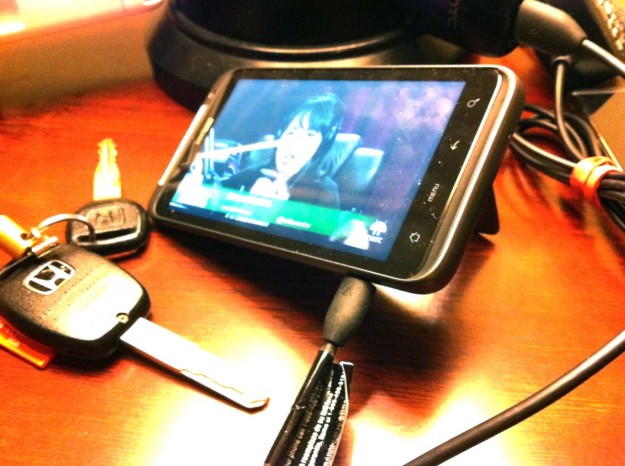 Thunderbolt Kickstand is great, but the micro-USB power port is in the wrong place.

I love my Thunderbolt’s large screen for viewing video in the car while my wife drives or on the desk of a hotel room while I’m checking email, RSS and other things online. Because of the poor battery life, while in the car, I keep it plugged into the Griffin PowerJolt Dual Micro which is a DC to double USB converter. In my hotel room, I plug it into my Belkin charger, which also has two USB ports and plugs into a regular AC slot. Unfortunately, as you can see in the image above, it is awkward to use both the kickstand and the micro-USB port while the phone is in landscape mode. 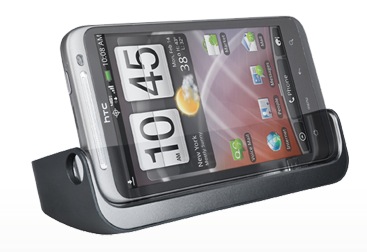 Didn’t HTC consider that people would want to do this? Yes, in fact I believe they did. They made a dock for this exact purpose. You slide the phone into the dock and it has a charging connector right where the micro-USB port on the phone exists. It charges the phone by plugging into a USB port or the included AC to USB adapter and also charges an extra battery, but that requires plugging it into another AC outlet. However, the dock is $60. Even if you want to pay that much, it is out of stock at Verizon. And honestly, who wants pay that much for a clunky dock that has no media out ports. You can find them cheaper, but you shouldn’t need a dock while you are on the road with carrying a phone with a built in kickstand. I just want my cable and the phone.

The design choice is a fail on the part of HTC and it hurts an otherwise great experience with the Thunderbolt. This kind of attention to detail is what sets company’s apart, but HTC must have been taking a break from attention to detail when they settled on port placement.

If I was a conspiracy theorist, I’d say HTC put the port on the bottom on purpose to make you buy the dock. In my case HTC failed to achieve this goal — if that was their plan.

I still love using the HTC Thunderbolt, but wish HTC had been thinking of users like me when it chose the location of the micro-USB port.