Verizon’s first 4G LTE smartphones will soon get successors with much improved specs. According to a leaked document, the Thunderbolt’s successor will be the HTC Vigor, and that device may be called the Thunderbolt 2. Additionally, the Droid Charge’s replacement would be in the form of the Samsung Prime.

The HTC Vigor had been rumored in the past to sport powerful dual-core CPUs, a high resolution 1280 X 720 HD display, and would be launched with HTC’s Beats Audio. The device was believed in the past to launch under the Droid Incredible HD branding with the unique back cover that looks to be an evolution of the Incredible and Incredible 2 lineup, but a recently obtained document from a Phandroid source suggests that Verizon would be calling the device the Thunderbolt 2. 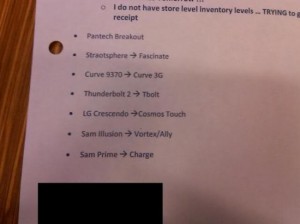 As to the Droid Charge, that device was given as the primary reason right now as to why Verizon Wireless will not be offering the powerful dual-core Samsung Galaxy S II on its lineup. Verizon had said that the Droid Charge is a nice alternative and that the carrier is looking at future devices from Sasmung. In the past, there are several rumors that Verizon would not only be the first carrier to offer its own G00gle-branded Nexus device once the Android-maker releases the Android Ice Cream Sandwich OS, but may be getting a slight variant of the Nexus Prime as its own Droid Prime. It’s unclear how much of that is true, but the same leaked document shows that Verizon will be carrying a Samsung Prime.