We had heard that the HTC ThunderBolt Gingerbread update might be making its glorious return at some point in the not-so-distant future and sure enough, it appears that things are in motion as Verizon has updated its support PDF for the update and it now lists the update as 2.11.605.5 which is the same version that leaked out last week.

So, it looks like that is going to be the official OTA.

If you recall, HTC and Verizon pulled the update after a few short days due to a number of bugs that crippled the device’s voicemail notifications among other things. The issues aren’t as bad as the random reboots but they are headaches nonetheless. 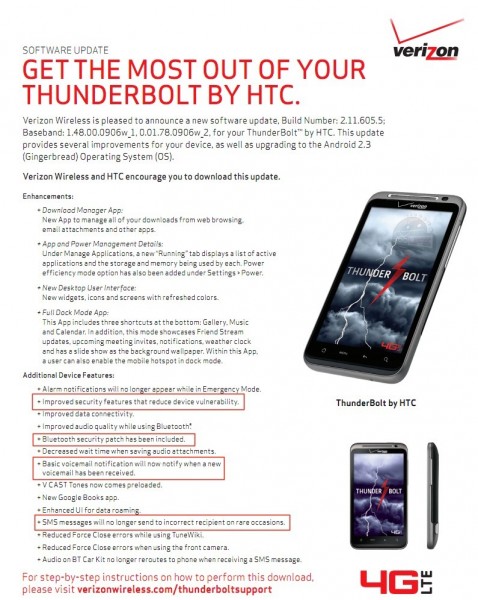 The PDF doesn’t list anything in the form of fixes, yet, so it’s unclear as to exactly what will be coming when the update arrives, but Droid-Life says that it will include a fix for the voicemail notifications, better Bluetooth security and a remedy for random SMS sessions.

The update is a large one, checking in at 146MB in size and it should start rolling out within the next couple of days.

We doubt it’ll be enough to smooth things over with heated ThunderBolt owners though.

Probably too late for that.