As January comes to an end, HTC is still singing the same tune when it comes to the missing HTC ThunderBolt Ice Cream Sandwich update. Per usual, the company still is not offering inquiring owners a specific release date but it is still telling them that the ThunderBolt ICS update is still in the works.

For the past several months, HTC has been engaging HTC ThunderBolt owners asking about the missing Ice Cream Sandwich update, an update that was once promised by the end of August but still hasn’t rolled out. In fact, the ThunderBolt’s ICS update saga is about to enter into its six month, just a month outside of the HTC ThunderBolt’s two year anniversary.

In response to these inquires, HTC has been all over the board. For the most part however, HTC has tried to calm owners nerves by telling them that its still working on an update. And it seems that it’s sticking to its guns all the way into the start of February.

In an email to Gotta Be Mobile, a frustrated HTC ThunderBolt owner has relayed HTC’s response to his questions about the missing update. The response is a familiar one. 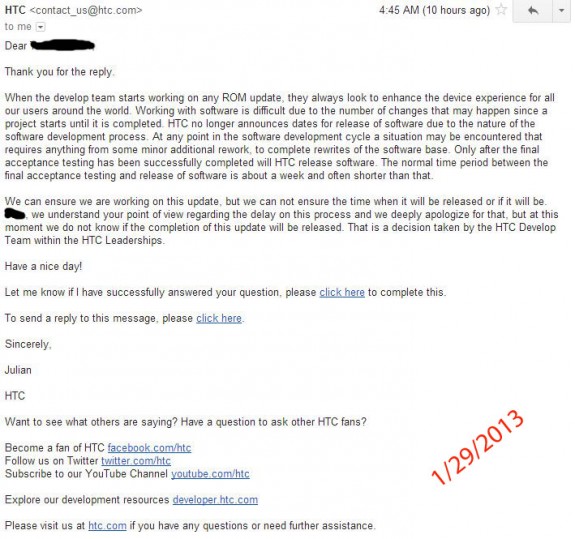 HTC says that it is still working on the ThunderBolt ICS update.

HTC again confirms that it is indeed still working on the HTC ThunderBolt Ice Cream Sandwich update but offers no time table on when the software might be released.

At the very least, this should instill a bit of hope into owners that have waited this long for the software to roll out. As we’ve said many times, HTC likely would have cancelled the update already if it was never going to roll out and while it’s not confirmation that anything is close, it helps that representatives are still confirming the update to be in the works.

HTC has said that it’s ironing out connectivity issues with the update and it has also said that the update will “be here soon“. Here’s to hoping that it gets those ironed out and is able to make good on that proclamation.

The HTC ThunderBolt was the first 4G LTE smartphone in the United States and it remains on Android 2.3 Gingerbread, a piece of software that has been replaced by three new versions of Android.

Thanks for the tip, T!