Last we heard about the HTC ThunderBolt random reboot fix was that HTC and Verizon were cognizant of the issue and that they were working together in order to swiftly get out a fix. Well, two weeks later we still don’t have a fix for the issue but it appears that it could be rolling out at some point in the next couple of weeks. 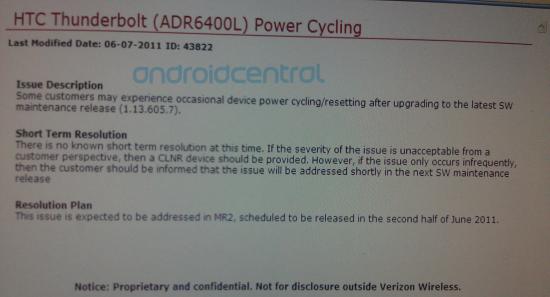 According to a leaked internal document, Verizon is preparing to get the fix out to ThunderBolt owners at some point in the latter half of June. Seeing as it’s only June 8th, that means we are at least a few weeks away from seeing the update roll out which means that those of you who are experiencing the problem are going to have to keep on trucking.

You’ll also see here confirmation about Verizon’s policy of handing out replacement devices for those that are seeing the issue. Of course, the replacement device is going to be a CLNR (certified like new replacement) but it’s a new phone that won’t be rebooting all the time.

For those that would rather not go this route, well, then you’re just going to have to be patient.