A day after the HTC ThunderBolt update was said to be delayed, Verizon has gone ahead confirmed this by updating the ThunderBolt’s support page with the words “Coming Soon.” 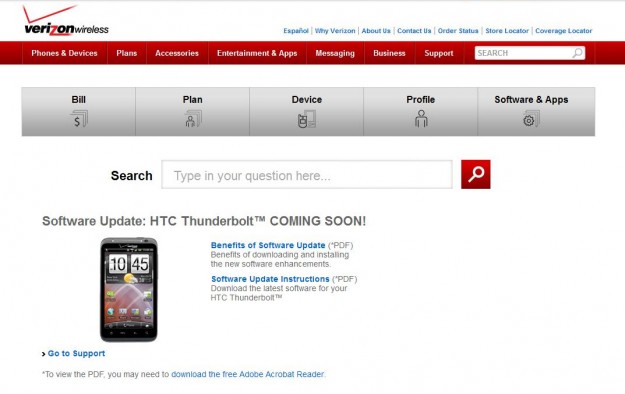 We had thought that the HTC ThunderBolt update would start rolling out and bring owners of the 4G LTE device a host of improvements and bug features, however last night, it appeared that Verizon had delayed the update for unknown reasons.

It also apparently was going to update the ThunderBolt’s support page to reflect this and while there was no sign of any change yesterday, Verizon has updated it with today. No specific date for a roll out, only the words coming soon, which generally ring pretty hollow in the smartphone update world.

So, it could be a matter of hours, a couple of days or maybe even a week or two before Verizon is comfortable pushing this update out.

The reason for the delay remains unknown but it’s possible that it has something to do with the 4G LTE network which went down last week and pushed the launch of the Samsung Droid Charge back to an unspecified date.