Verizon is preparing to release an update for the HTC ThunderBolt, however, it’s probably not the update that many ThunderBolt owners have been waiting for.

Droid-Life has confirmed that the update, a bug fixer, has been approved by Verizon and that means that it should be rolling out to HTC ThunderBolt owners at some point in the near future. Once updates like this get approval, it could mean a matter of days or even a couple of weeks before the software becomes available.

And while the update is nice, it’s not Android 4.0 Ice Cream Sandwich, an update that ThunderBolt owners have been waiting patiently for.

That being said, it’s a nice little update that should take care of some of the issues that owners have been having with the problematic device. 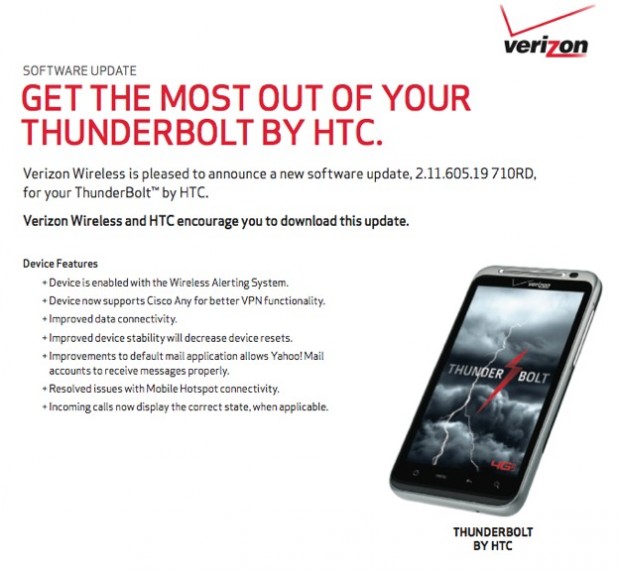 The key features on board the new software include improved data connectivity, improved device stability which Verizon says should decrease resets (people are still having those?), and a resolution to mobile hotspot issues that owners have seen since last year.

All in all, this is a pretty good update and one that should be welcomed by all HTC ThunderBolt owners who have somehow endured through all of the phones issues.

As for Android 4.0 Ice Cream Sandwich, the only thing we know right now is that it is coming at some point down the road. Neither HTC or Verizon has confirmed anything in regards to the timing of the update which leads us to believe that we’re pretty far off from the roll out.

Keep those fingers crossed though and be on the look out for this bug fixer in the days ahead.