Remember that HTC ThunderBolt OTA update that was supposed to roll out and bring a host of improvements and fixes? Well, it appears that the update has been halted by Verizon and it will be delayed indefinitely because of unknown issues. 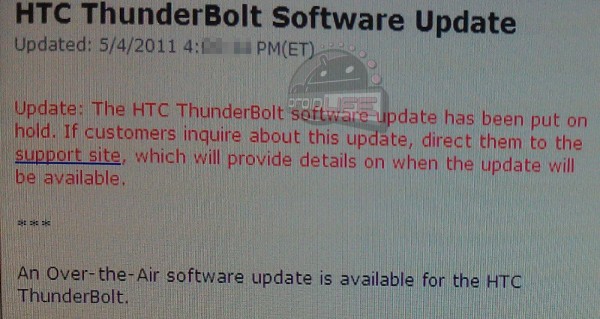 While the update was no Android 2.3 Gingerbread, it did include some pretty nice features including enhanced 3G data connectivity, more stability for apps like Facebook and KAYAK and faster GPS updates for Google Maps and VZ Navigator.

Verizon has apparently recommended the HTC ThunderBolt update support page as a place for ThunderBolt owners to stay informed about the delay. A quick visit to the site reveals nothing out of the ordinary and, as of right now, no word on the update.

The carrier recently had issues with its 4G LTE network, issues that forced the carrier to postpone the Samsung Droid Charge’s release date, and it wouldn’t be surprising to learn that the 4G network had something to with the halt on the ThunderBolt’s update.

As soon as we hear more, we’ll let you know.