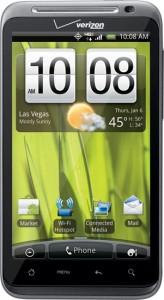 Tipsters are saying that the HTC Thunderbolt, believed to be the first 4G Android smartphone for Verizon Wireless, will make its debut on the carrier with LTE support on March 21st, which is the eve of the CTIA wireless trade show in Orlando, Florida. The phone’s numerous delays and launch setbacks in the past have created a stir on the Internet with upset fans and eager owners.

The phone’s pre-CTIA debut seems appropriate as it is the largest trade show dedicated to wireless in the U.S. The Thunderbolt was initially announced at the Consumer Electronics Show earlier this year.

The Thunderbolt is one of four phones that were announced for Verizon’s nascent 4G LTE network at the Consumer Electronics Show. At the time, Verizon had only committed to a first half of 2011 launch date. For its part, as the carrier never had announced a launch date, there really isn’t a delay. However, with leaked dates slipping several times, the fate of the Thunderbolt as the first 4G LTE device was questioned by a few. Recent speculation suggests that Apple may have thwarted Verizon’s plans to launch the phone earlier. As the iPad 2 was announced earlier this month and is slated to go on sale today, Verizon didn’t want to compete with the iPad 2 announcement as the carrier will also be offering a 3G CDMA version of Apple’s second-generation tablet.

At the CES press conference, Verizon and HTC reps said that the Thunderbolt is blazing fast. The Thunderbolt runs on a newer single-core version of Qualcomm’s Snapdragon CPU. With 4G LTE, download speeds are said to be up to 10 times faster than 3G mobile broadband speeds on Verizon’s network.