It looks like HTC is working on a successor to the original HTC Flyer tablet, which debuted with an active digitizer. The company’s Flyer 2 tablet will reportedly be a 7-inch model with an improved HD resolution display clocking in at 1280 X 768 pixels. It’s unclear, though, if HTC intends on supporting the HTC Magic Pen and the HTC Scribe SDK with the Flyer 2 as the company’s pen-enabled efforts have not been as well received as Samsung’s Galaxy Note lineup.

According to Phone Arena, the second-generation Flyer will utilize the same thin unibody aluminum design as the HTC One S smartphone. This probably means that the HTC Flyer 2 will see the same ceramic coating through a process called micro arc oxidation. 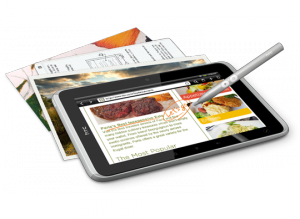 The device will also be powered by the same Qualcomm Snapdragon S4 processor as found on the HTC One S smartphone. The Flyer 2 will launch with Android 4.1 Jelly Bean, which is Google’s most current operating system, and the device will have a 3-megapixel rear camera and a front-facing camera.

It’s unclear though what price the HTC Flyer 2 will debut at. The original Flyer debuted at a $500 price tag. HTC will likely have to keep prices around $200 to compete effectively against the Samsung Galaxy Tab 2 7.0, the Google-branded Asus-made quad-core Nexus 7 tablet, and the Amazon Kindle Fire. With a more budget-conscious price tag in mind, HTC may not incorporate the active digitizing touchscreen technology and may eschew support for the HTC Magic Pen all together. The HTC Sense integration with the pen on the first-generation Flyer was not as robust in terms of handwriting support as Samsung’s implementation on the Note.

HTC has a scheduled media event later this month and it is speculated that the company would announce the a 5-inch phablet for Verizon Wireless. The HTC Flyer 2 may be part of the same announcement, but that’s unclear.

In the U.S., the only wireless carrier that offered a version of the HTC Flyer with integrated 3G/4G mobile broadband was Sprint in the form of the HTC EVO View 4G. It’s unclear if Sprint will also support the HTC Flyer 2 on its network when that tablet debuts.