Last week, we laid eyes on a quad-core smartphone called the HTC Edge which was rumored to have a Tegra 3 quad-core processor and a launch at the Mobile World Congress in 2012. Today, it appears yet another HTC-made quad-core smartphone has leaked out and this time it’s the HTC Zeta which apparently sports a blazing fast processor, HD display and Android 4.0.

The Zeta apparently has a 2.5GHz APQ8064 CPU on board along with 1GB of RAM and it’s also rumored to sport a 4.5-inch 720p HD display. It’ll also supposedly come with Android 4.0 and Engadget is theorizing that it’ll also have HTC Sense 4.0 over the top of it when it arrives at some point in the future.

More specs include 32GB of internal storage space, Beats Audio, a 1,830mAh battery, 8MP rear camera, 1.3MP front-facing camera, and a design that is as intriguing as the specifications. 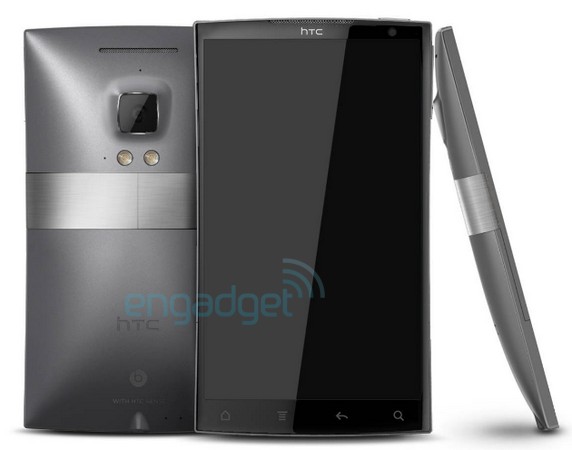 Of course, because HTC hasn’t said a word about this thing yet, we have no idea what carriers it will be headed to or when it will be arriving.

In fact, this could just be a render of an idea and not a real phone.

We’re very much hoping that it’s real and that we get some more concrete information soon.