The HTC Droid DNA, Verizon’s in-house Samsung Galaxy Note 2 competitor, has moved closer to launch on the carrier as it has become apparent that finally Verizon is kicking things into full gear in terms of the 5-inch device’s upcoming launch.

Droid-Life leaked an internal Verizon document that clearly shows the name HTC Droid DNA with a couple of photos and specs sitting next to it. There is also a photo of the Galaxy Note 2, a device that the HTC Droid DNA will compete against this holiday shopping season.

What’s more, the site claims that the carrier might have begun training sales associates for the device or at least have mentioned the device in order to better prepare for the upcoming launch. 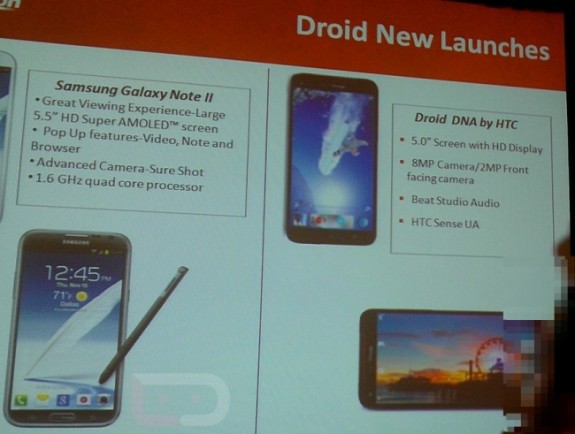 The Droid DNA will launch soon on Verizon.

The HTC Droid DNA is apparently being discussed at meetings and although no release date is confirmed just yet, it looks like we may get an announcement in the near future regarding all of the details.

Fortunately, we now have some confirmation on a few of the specs of the HTC Droid DNA including its name, its screen size and more. The document uses the Droid DNA name and it also lists the device as having a 5-inch HD display, an 8MP rear camera, 2MP front-facing camera for video chat, and HTC Sense over Android. We still don’t know what version of Android it will use. It’s also unclear if HD means 720p or 1080p.

The HTC Butterfly J, a device that this device takes after, boasts a full HD 1080p display. There is talk that this phone might have it, but there are rumors it may also possess an LCD-2 display instead.

We also don’t know when it will be unleashed to compete with the Galaxy Note 2 on Verizon’s network. There has been talk of a Thanksgiving launch but there are also rumors of an early December release. The Galaxy Note 2 is slated to arrive on November 29th so it would appear that both devices are going to launch in close proximity to each other. Just how close though remains unknown.