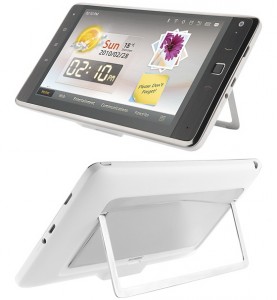 If Samsung’s Galaxy Tab, which has proven successful with sales of 600,000 units in the first 30 days of a global launch (compared to the iPad’s 1 million sold in the same period), is too expensive for your budget, you may want to consider the Huawei Ideos S7 tablet, which also boasts a 7-inch screen and plenty of connectivity options for your budget. Compared to the $600 Galaxy Tab’s unsubsidized price, a $300 Ideos S7 may seem like a bargain, but there are a few caveats to the model, most notably the use of a resistive touchscreen rather than a capacitive touchscreen to keep costs down.

The device does include a stylus, which makes use of the resistive touchscreen, or you can apply a little bit of pressure and use your fingers instead. Also included is a kickstand so you can use it as a photo frame or video viewer. The Ideos S7 is also available in white to contrast with the black Galaxy Tab slate. Another draw back is the 2-megapixel rear camera and no front camera–the Galaxy Tab has a front camera and 3-megapixel rear camera.

Moreover, while the Best Buy site lists the unit with WiFi, the unit that I had seen in the store also had a “No SIM” warning on the display and a red and green phone button next to the trackpad on the right hand side, implying that the unit has phone functionality though that feature was notably absent from Best Buy’s specs listing for the Ideos S7. Various user reviews have indicated that a number of users have gotten the phone feature to work, but some say that their AT&T SIM card does not work with the unit, perhaps lending reason to why Best Buy isn’t advertising this as a tablet with phone or 3G capabilities, though your luck may vary. If you do purchase this slate, be sure to check the return policy at Best Buy if you intend on attempting to get 3G mobile broadband data, like the Galaxy Tab, and/or phone functionality.

Also, a third drawback of this unit is that it only runs Android 2.1, not the latest Android 2.2. The Galaxy Tab has Android 2.2, which adds the ability to display Adobe Flash content.

If you need an inexpensive browsing device, YouTube display, or a reader, the Ideos S7 may still be a great device for you, especially since it’s only $300 sans any contract and will come, presumably, with phone and mobile broadband data support if you drop in your SIM–if you go this route, be sure to check specs and ask your Best Buy salesperson as we’ve mentioned.