They call it the Huawei MateBook maybe because it seems like an iPad Pro and a Surface Pro got together to create this Windows 10 tablet. How does it measure up to either of the two best tablets available?

The Huawei MateBook sports a 12-inch 2160 x 1440 resolution IPS screen that also uses an active digitizer. That means an optional MatePen writes with fine tip ink for drawing, note taking and general Windows selection and clicking. This makes comparing it to the Microsoft Surface Pro 4 and the larger 12-inch iPad Pro natural. 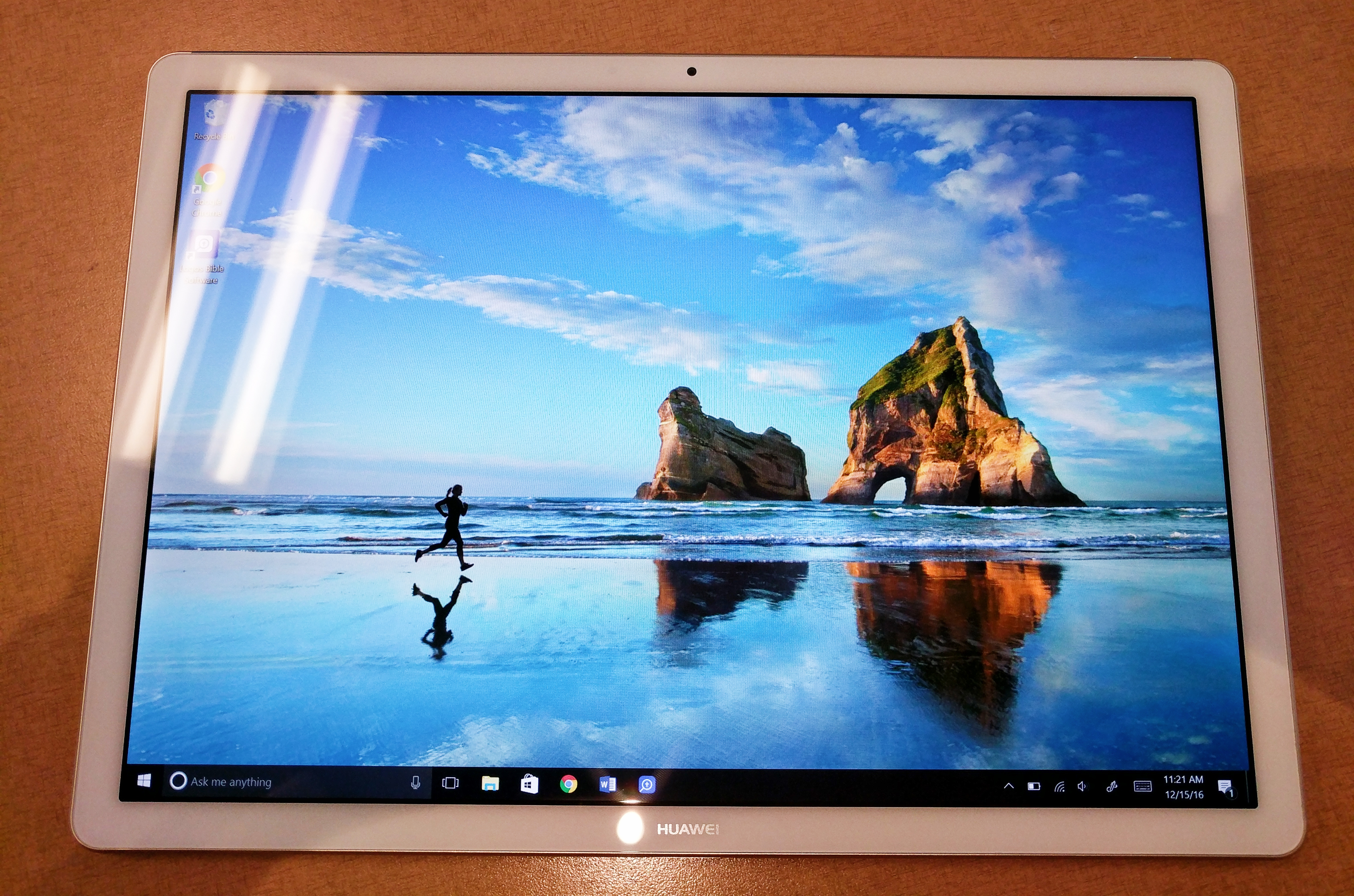 With the beautiful leather MateBook Portfolio Keyboard case ($129) and the MatePen ($59) you’ll pay $687 on sale at Microsoft’s online store. That’s for the Intel Core m3 processor version, a bargain when you consider the iPad Pro 13 inch starts at $799 and the Surface starts at $899. The Intel Core i5 version of the Surface Pro 4 is on sale for $749. Neither of those options comes with a keyboard or pen/pencil.

iPad Pro’s design genes seem to win out in this fictional combination of the iPad and Surface. The Huawei MateBook looks like a white or black iPad Pro with a slightly thinner bezel around the high-resolution touch screen. The glass front and aluminum back feel high quality and sturdy. There’s very little bend. The back tapers slightly to rounded edges and corners. You can see a thin aluminum line around the bezel. 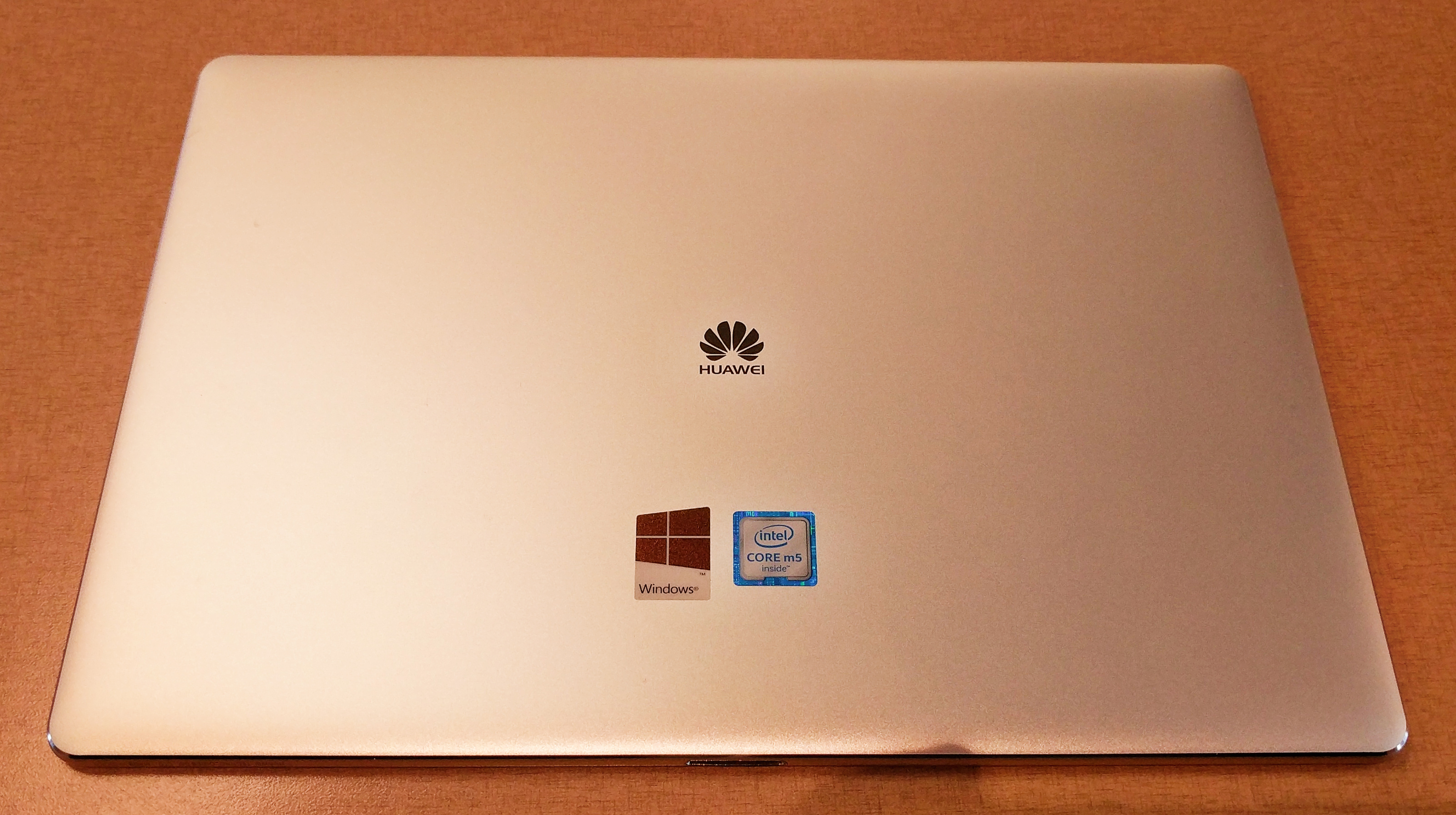 Along the bottom there is a connector that attaches to the Huawei MateBook Portfolio Keyboard case. More on that case below. 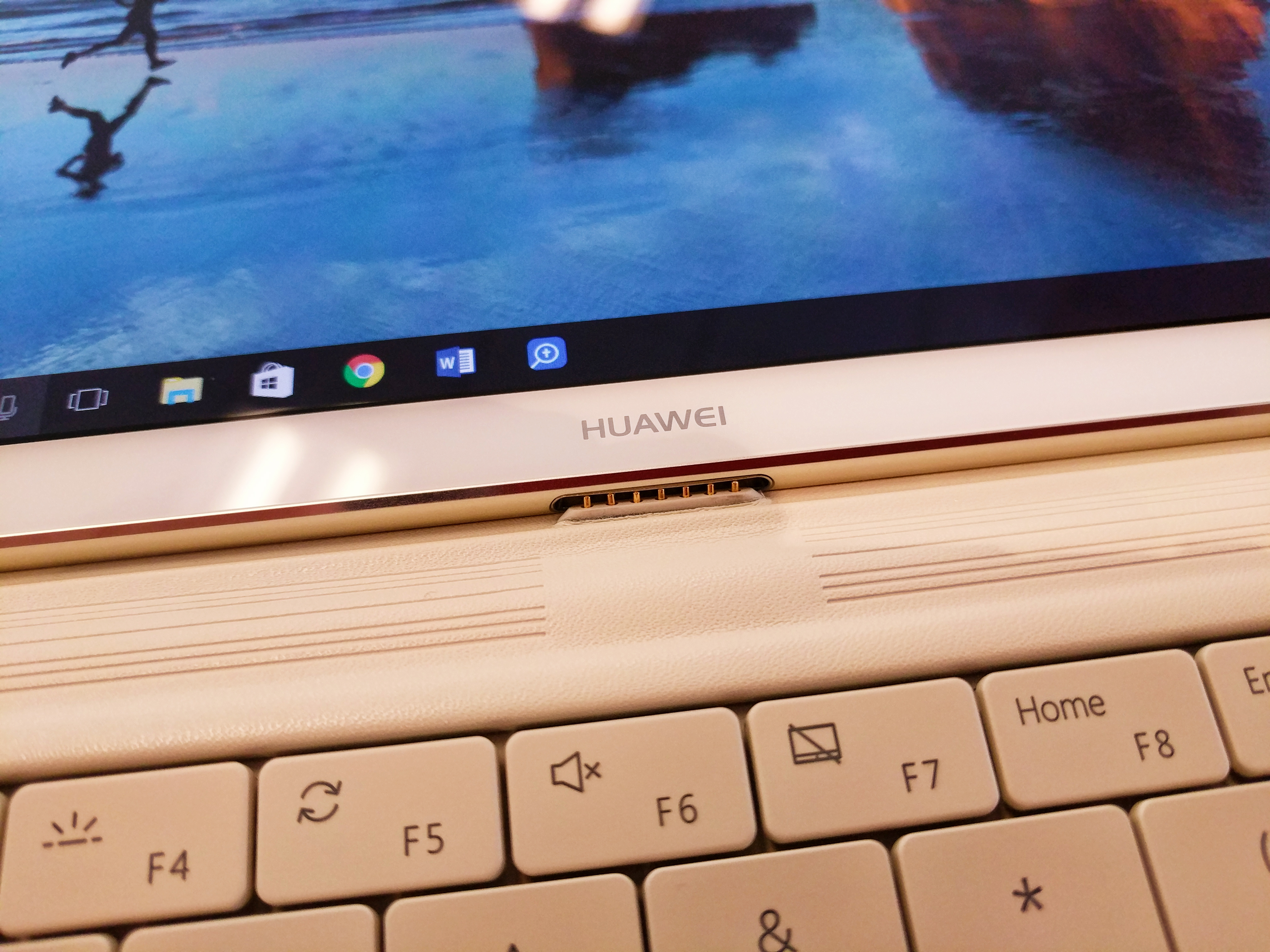 No one will complain that Huawei cut corners in manufacturing or design. That said, it’s a little boring. The Surface Pro 4 comes with a bit more character. Generally, the MateBook’s just a slab of glass and metal. However, the understated design fits a conservative professional look that business users might prefer.

The beautiful high-res IPS screen will win fans because it’s bright and accurate. Reading text or watching video looks nice on this display. 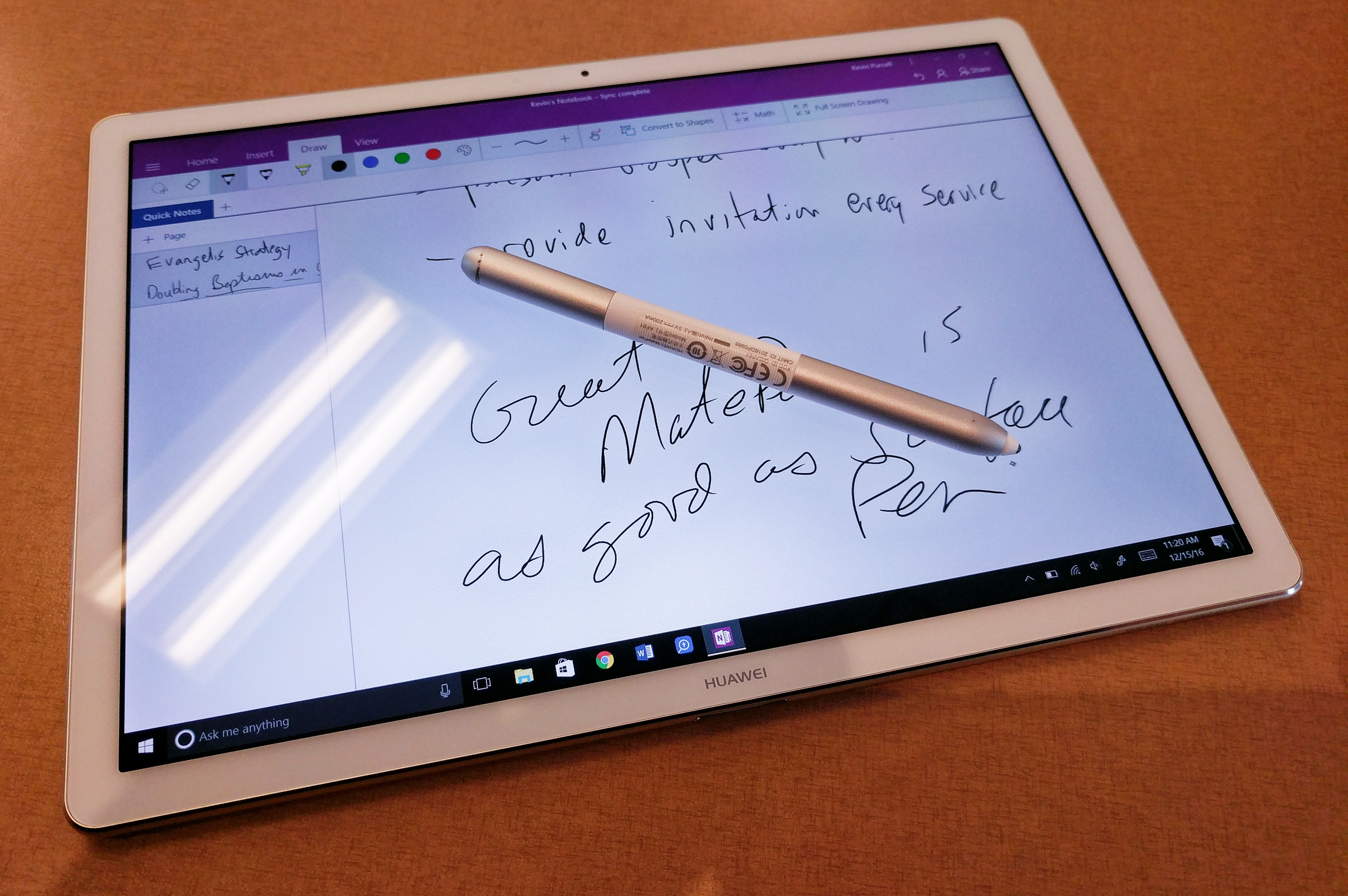 The screen’s touch feature works well. Windows 10 suffers as a pure touch interface, however, I could accurately interact even with tiny buttons. It just seems to work. Add the fine tip of the MatePen and you get a nice handheld computing experience.

The speakers match the beautiful screen. They sound plenty loud enough and give good sound. Sure, they’re not going to impress people who love high-end sound equipment, but they deliver enough volume to make the MateBook a good tool for entertainment and handheld casual gaming.

Artists will enjoy using the accurate MatePen. So will students and business people who want a tablet for taking handwritten notes or who want to mark up PDF files, documents and more. If you’ve never used Lightroom or Photoshop to edit photos on a Pen-enabled tablet, give it a try. The MateBook is a great option for visual artistry.

The MatePen works great. It’s accurate, comfortable and easy to use. 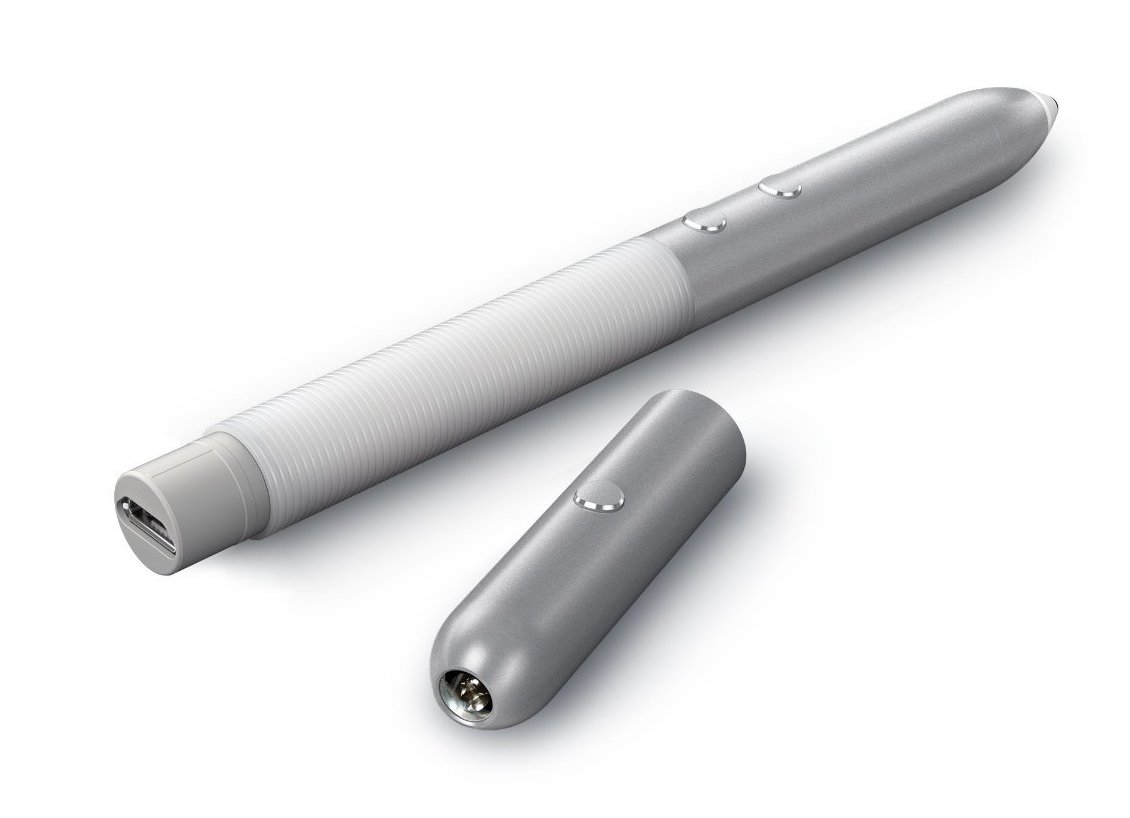 Towards the tip, you’ll find two buttons. The one closer to the tip turns it into an eraser. The other works like a right-click button. A third button further from the tip engages the built-in laser pointer, a useful feature for people doing presentations with the MateBook.

Charge the built-in battery by pulling off the end opposite the writing tip, Plug in a micro-USB charger or use the included USB Type-C to micro-USB cable so you can charge using the computer’s USB C port. 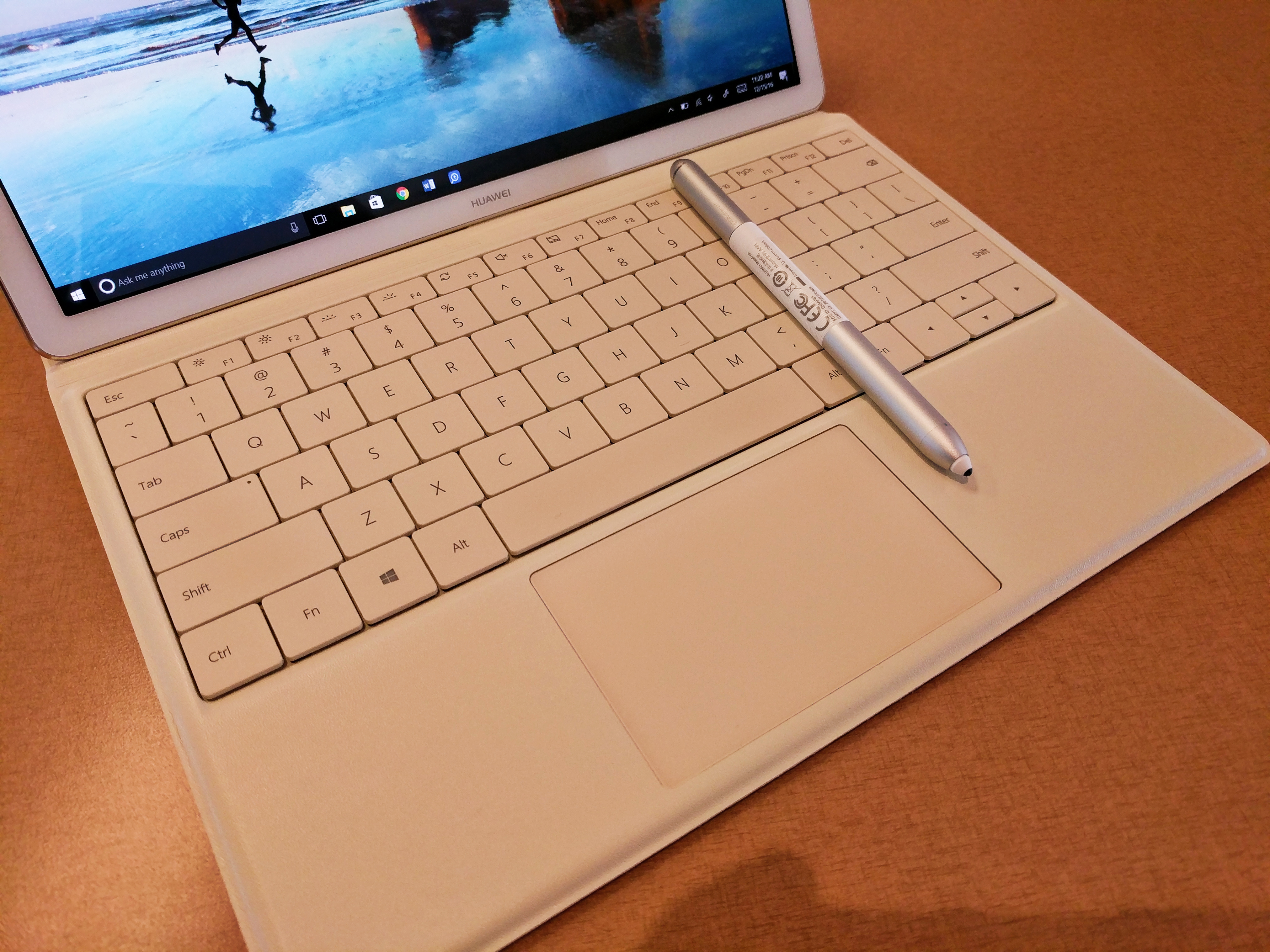 The keyboard lacks the design quality of the tablet or MatePen. It comes built into the Huawei MateBook Portfolio Keyboard and normally costs $129 on top of the price of the tablet. Right now Microsoft is throwing it in at their online store, but that sale may not last into 2017. Huawei should always give this thing away, because no one will ever want to pay for it. If they do, they’ll want their money back. 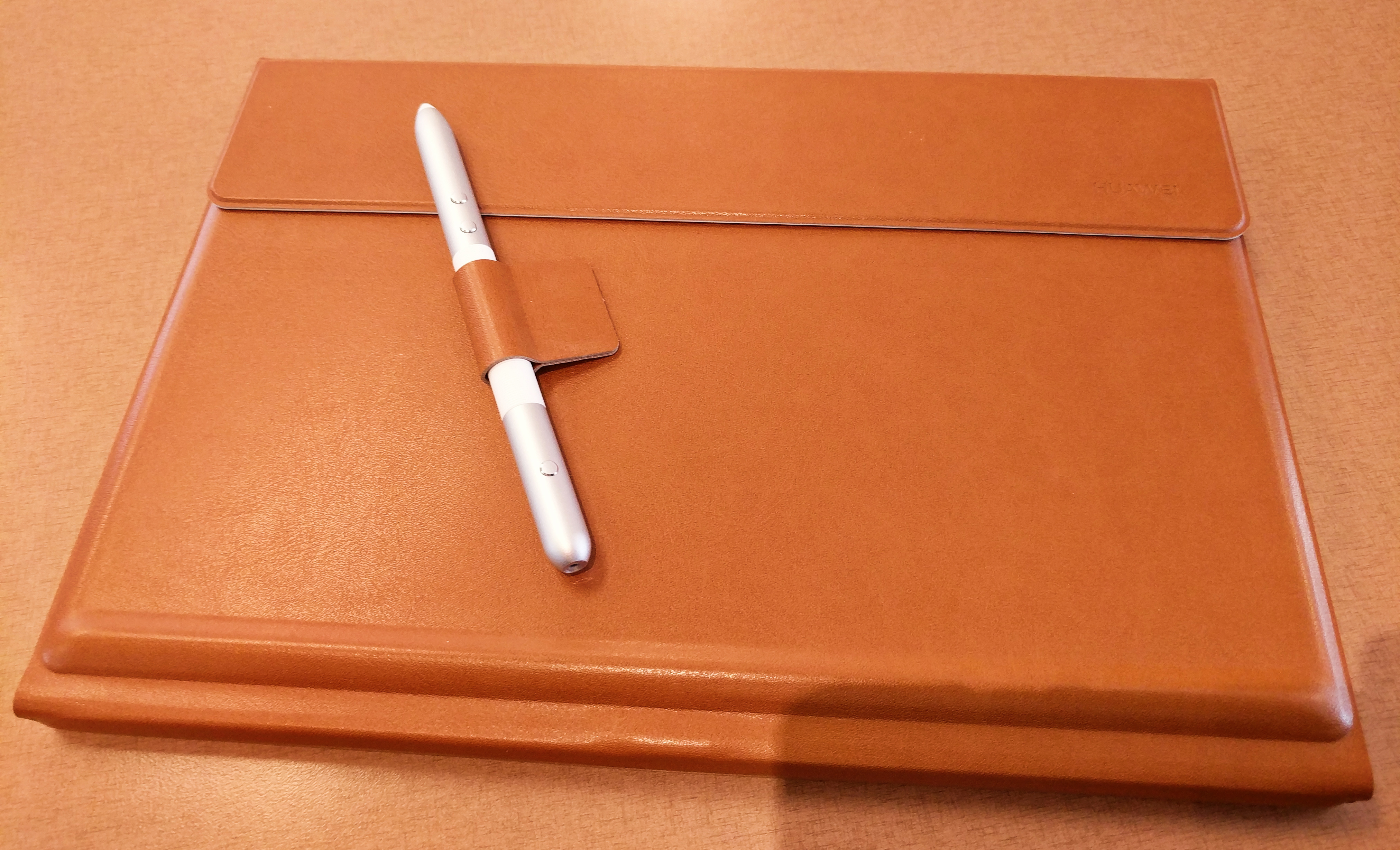 The case looks and feels nice. The attractive leather brown exterior seems like a high-end cover for a high-end tablet. Buyers can also pick from black, beige and orange. It includes a nice connector that snaps into place thanks to the magnets in the case and bottom edge of the tablet. That’s where the joy ends. 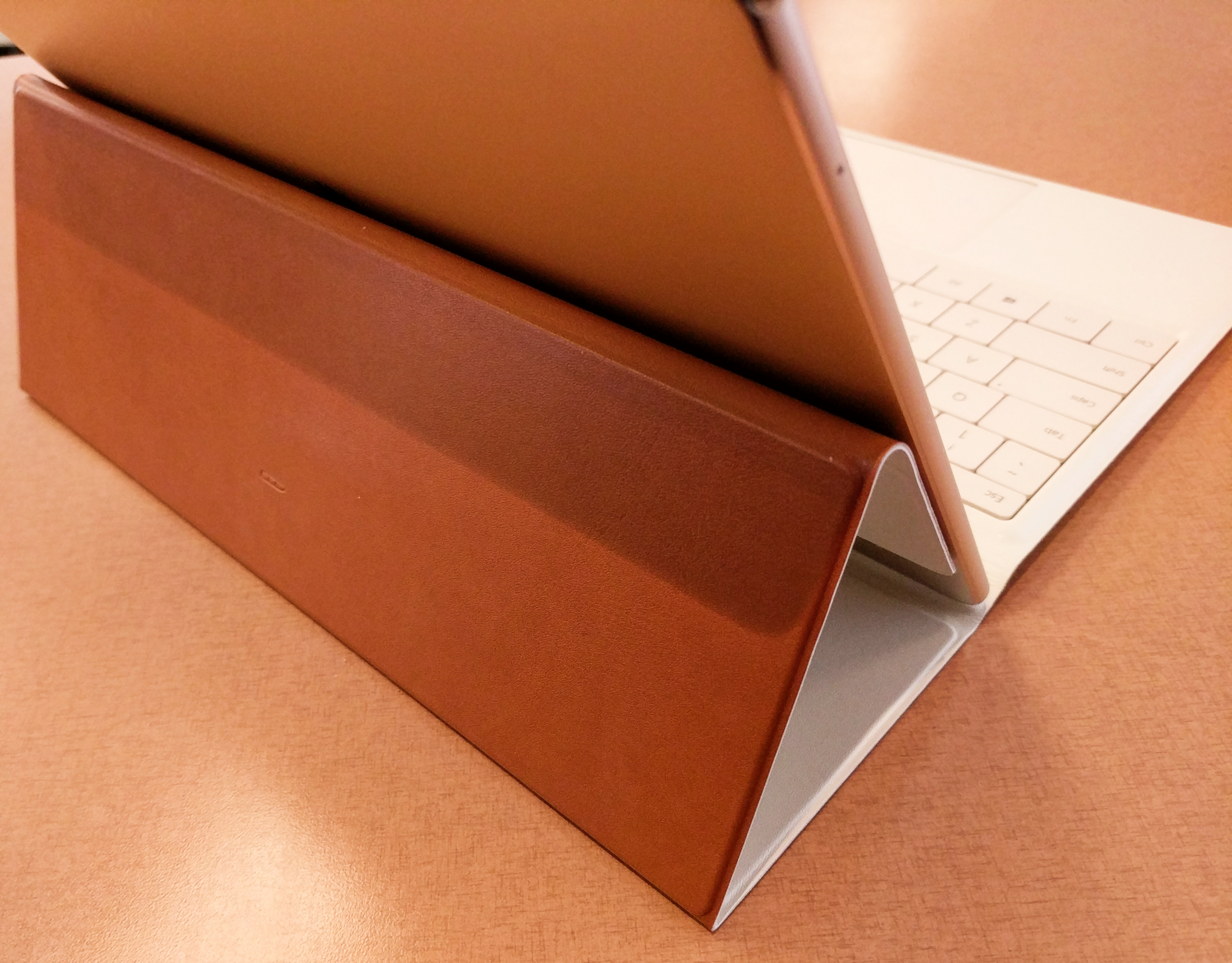 Try to set the tablet up for typing or even just to use as a stand while touch, writing or drawing on the screen and the tablet wobbles way too much. A magnetic flap keeps the case closed and doubles as a magnet to fasten to the back of the tablet. It doesn’t hold the tablet up and sometimes slides down until the tablet falls back onto the tablet or desktop. Huawei needs a better design to make this worth $129.

Typing on the keyboard takes a lot of adjustment and it’s hard to type accurately. The integrated touchpad feels like most Windows touchpads used to feel, which means it’s terrible and too small. The keyboard is backlit, but that’s the only good thing I can say about it. 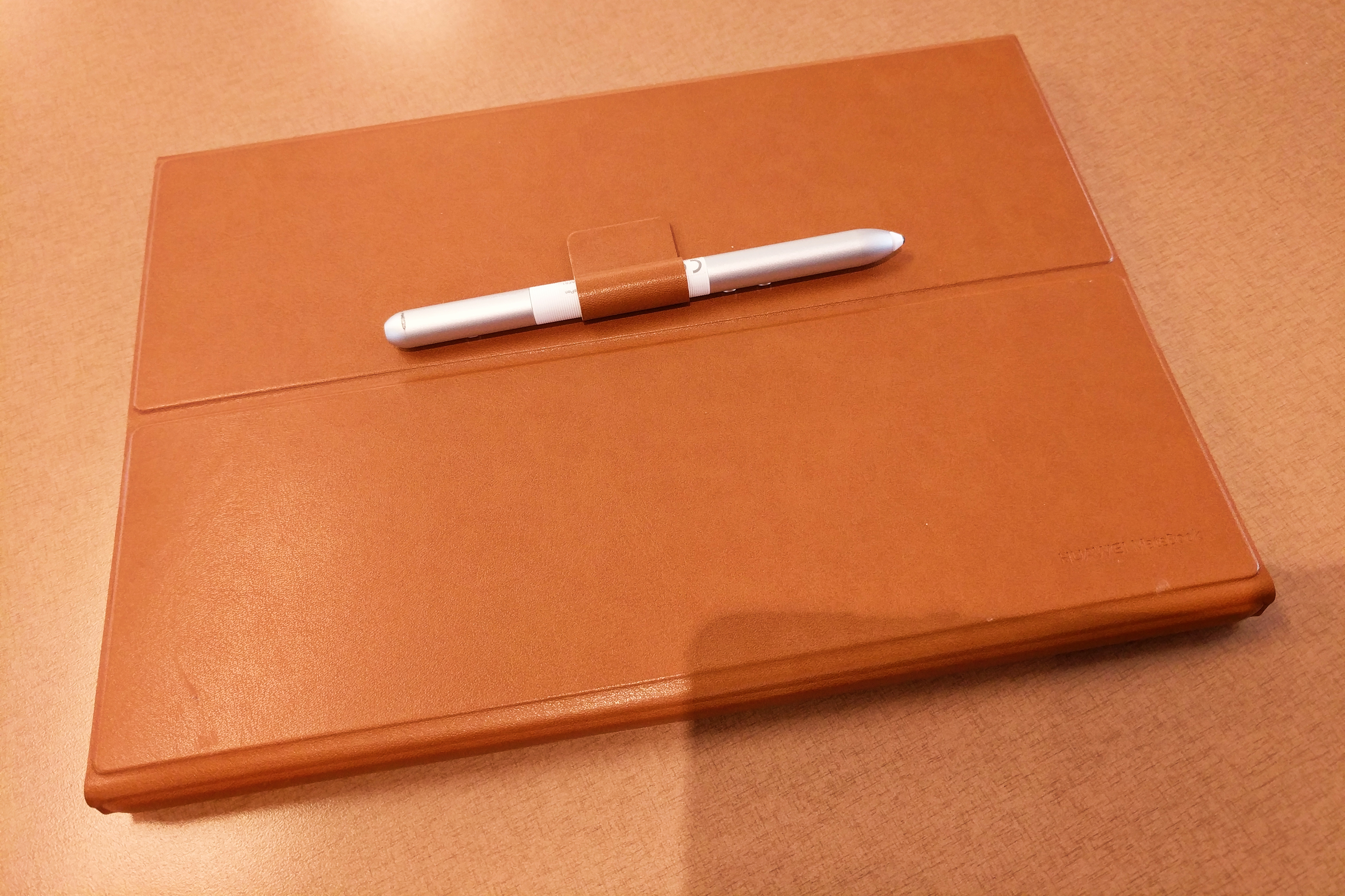 Get a Bluetooth keyboard instead of buying this, unless you get it thrown in for free as part of the bundle deal Microsoft’s offering. If you look carefully, you can find a keyboard with a stand. You’ll enjoy typing on that much more than the terrible Huawei MateBook Portfolio Keyboard case.

Despite the sixth gen 3.1MHz Intel Core M dual-core processor, the MateBook performs reasonably well while doing simple things like online tasks, word processing and even some casual gaming. It’s obviously not as fast as my Surface Pro 4, which comes with an i5 processor. It’s also not as smooth as the iPad running iOS. Still, I enjoy using it as a media consumption device and for occasional work. It’s not great for editing large photos or videos, but simple creative tasks will work fine.

Huawei promises 10 hours of battery life, an exaggerated figure. I got closer to 6-8 depending on whether I set the screen brightness to full in a bright room or lower in most settings. That’s not terrible and compares favorably to my iPad Pro (about 8 hours) and my Surface Pro (about 6-7 hours).

The included SSD helps the machine boot fast and programs don’t stutter very much. My most power-hungry software worked okay despite the Intel Core m processor and only 4GB of RAM.

Don’t expect a lot of ports. We get a USB Type-C port for both charging and connectivity. There’s a mic/headphone combo port and the magnetic connector that hooks up to the keyboard case. 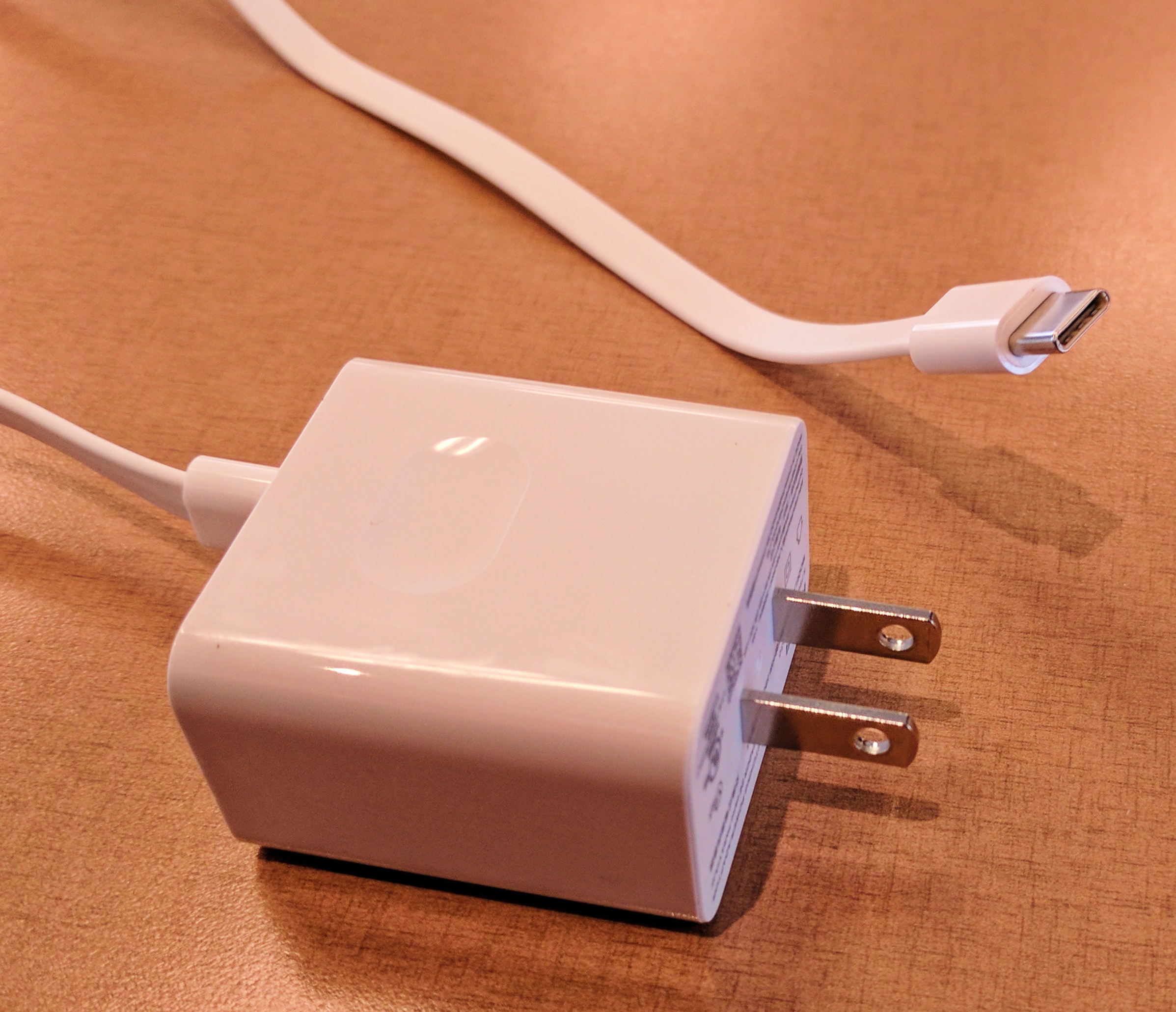 In the box with the tablet we get a USB-C cable that connects via a regular USB-A connector to the included charging brick. The brick’s not much bigger than an iPad Pro brick. There’s also the USB-C to micro-USB cable. 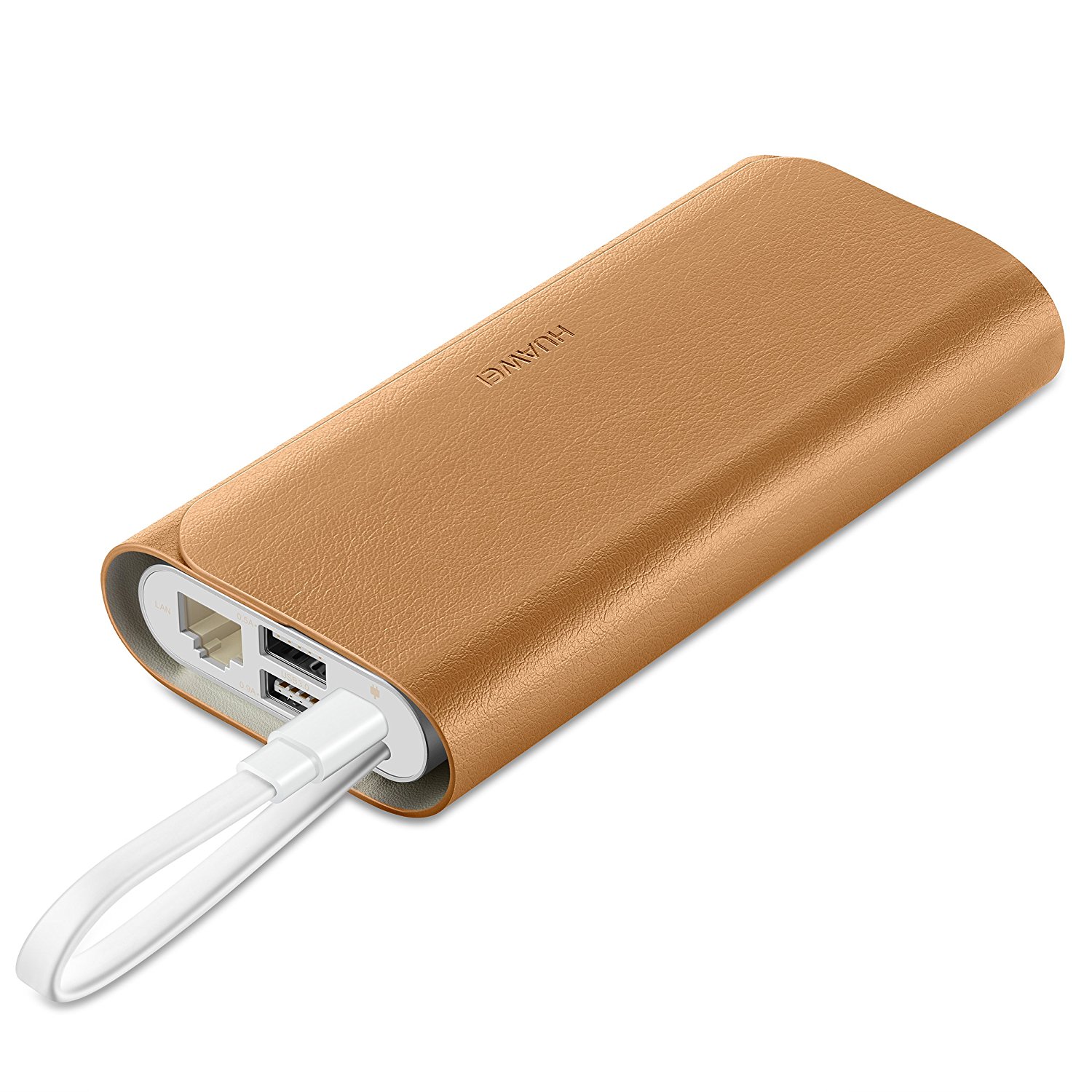 If you need more connections, consider the Huawei MateDock, made for the MateBook. It comes in a matching case made of the same material as the keyboard case. Plug it into the USB-C port and it adds the following ports to the MateBook.

The VGA and HDMI ports are on one end and the other ports plus the cable to connect to the MateBook are on the other end. It’s also got a pen loop to hold the MatePen, which you may want to use since the Pen loop that magnetically attaches to the back of the Huawei MateBook Portfolio Keyboard case doesn’t hold the Pen very well, another reason to stay away from the keyboard. Inside the case that houses the dock, there’s a white plastic part that holds the USB-A to USB-C adapter that comes with the MateBook as well as the adapter cable. 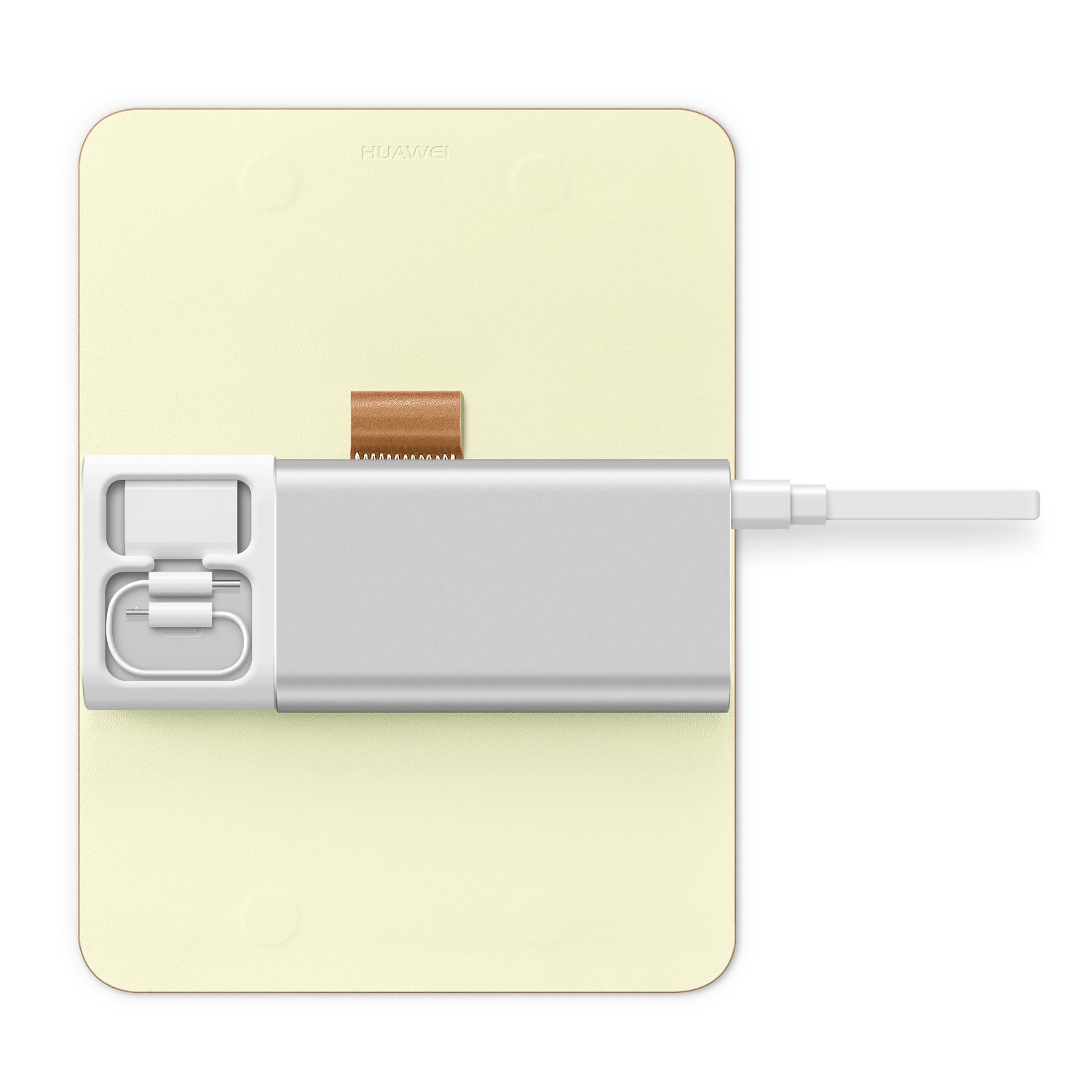 Windows 10 powers the Huawei MateBook. All the typical Windows 10 apps from their app store show up, including Candy Crush, Minecraft and the Get Office app. Add Flipboard, Microsoft Office and OneNote, and the rest of the built-in Windows apps. 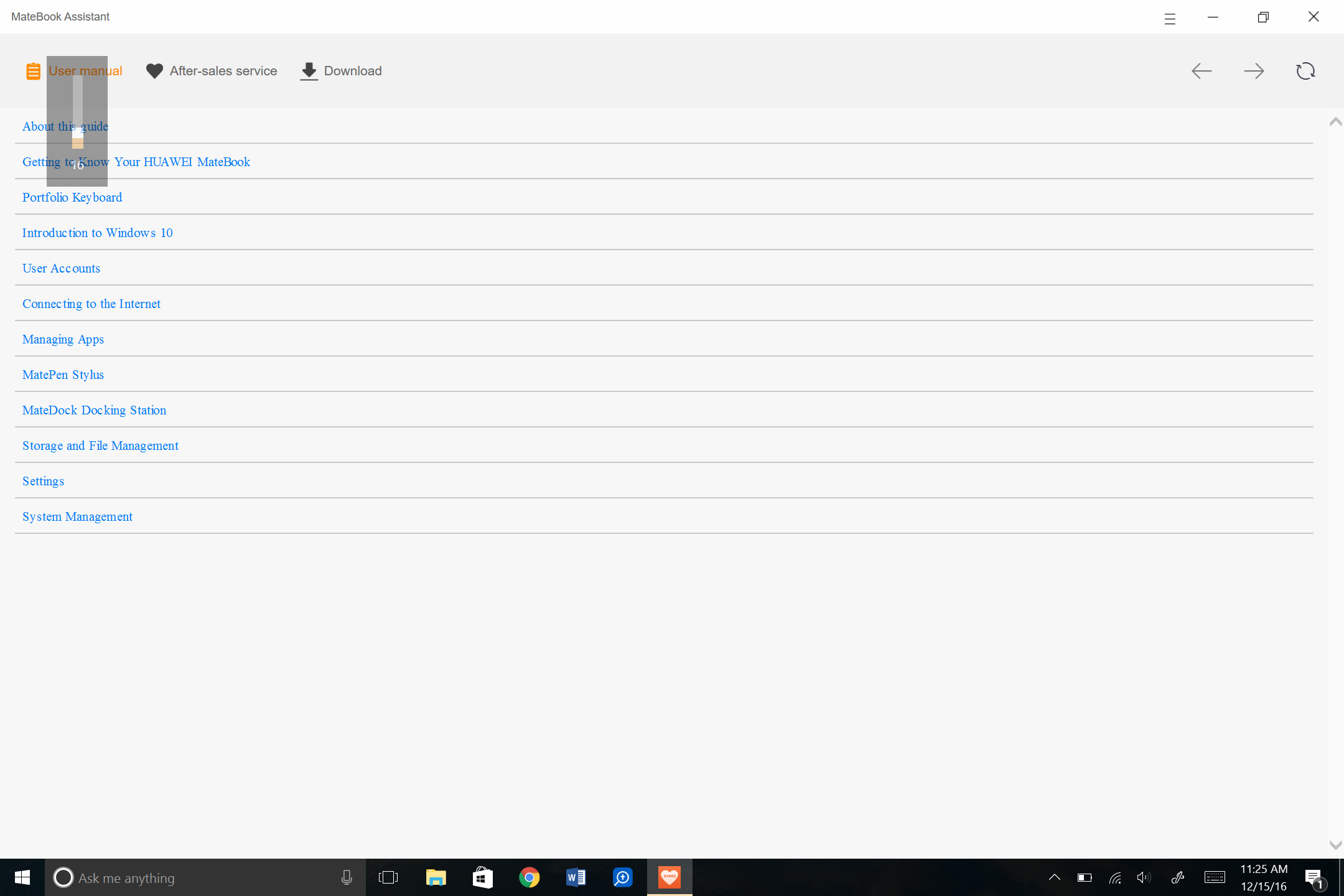 The MateBook Assistant app offers a user manual, links to service at Huawei and a place to download drivers.

Refreshingly, that’s all the software loaded on the MateBook. We don’t have to worry about a bunch of crapware like bloated security software, the glorified ads we get with many third-party apps that people don’t need but always show up on most Windows computers.

Comparing the Huawei MateBook to an iPad Pro seems unfair. Aside from the design and looks, they’re two very different machines. If you want a Windows tablet, you won’t want an iPad and if you want an iOS device, you won’t want a Windows tablet. If you only want a simple tool for apps and some art, then go with the iPad Pro even though it costs more. However, if you need something to run traditional software, like the full versions of Microsoft Office or some other special Windows software, then an iPad won’t do. That leaves the Huawei MateBook or some other Windows tablet. 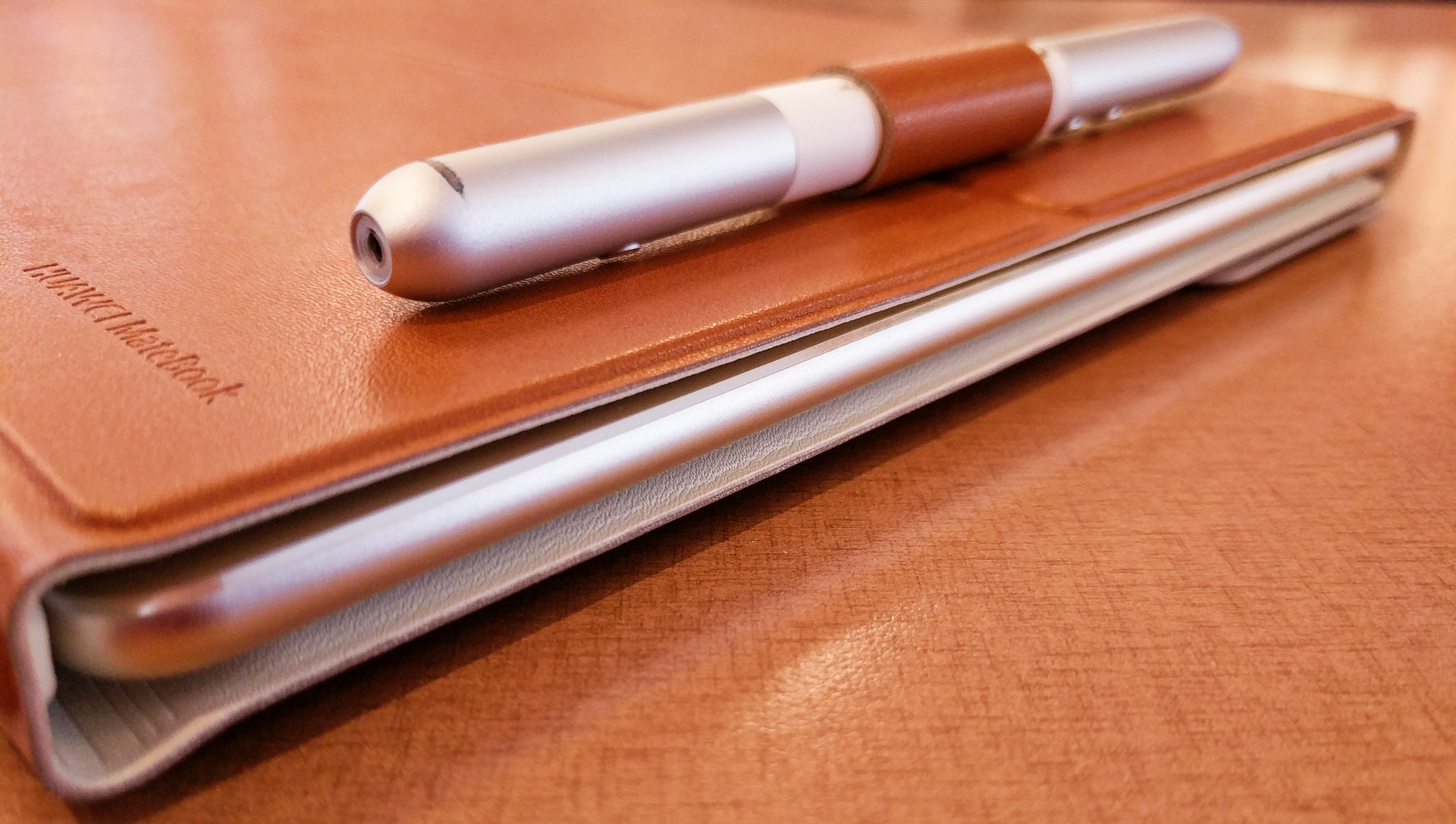 No one beats the Microsoft Surface Pro 4. It’s the best Windows tablet by far. Its excellent hardware, screen, speed and power for a decent price make it the market leader. However, if you want to save a little money consider the Huawei MateBook. We found the black version with the intro-level specs at Amazon for under $460, a great price. At that price it’s a compelling alternative to the Surface Pro 4.

If you only need a quality inking experience onWindows for art, taking notes or doing some light photo editing on the road, then the MateBook might suffice. Still, it’s hard to recommend it over the Surface Pro 4 unless the primary factor in your decision-making is price. Pay the extra money for the Surface Pro 4. The Microsoft Type Cover blows away the MateBook Portfolio Keyboard case. The MatePen is every bit as good as the Surface Pen, but the other compromises like a bit of performance and boring design along with the terrible keyboard mean the Huawei MateBook falls just a little short.