Though still unofficially announced by T-Mobile USA, leaked documents suggest that the nation’s fourth largest carrier will be launching a low-cost entry-level Android smartphone come May 6th in the form of the Huawei Prism. In the leaked marketing documents, the Prism is branded with a 3G moniker, suggesting that it will use a less expensive HSPA radio that won’t offer the same HSPA+ speeds that T-Mobile is marketing as 4G in the U.S. market.

The device is expected to arrive at Best Buy beginning May 6 and to become more widely available through more retail channels starting on May 23, according to TmoNews. 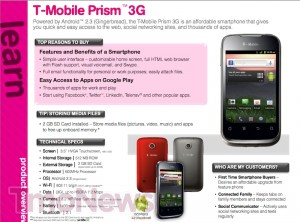 The Huawei Prism 3G for T-Mobile will come with a 600 MHz processor, 3.5-inch HVGA display, and Android 2.3 Gingerbread. The smartphone will also come with a 3.2-megapixel rear-facing camera as well. Bundled with the phone is a 2 GB memory card, though users can upgrade to a larger capacity card if they need more storage.

The phone’s 3G HSPA radio will be capable of 7.2 Mbps theoretical download speeds, though real world performance will likely be slower.

Pricing information was not yet available, though we can probably expect this to be a sub-$100 smartphone with a two-year contract on T-Mobile. We’ll hopefully learn more about this smartphone closer to its launch.