Huawei Talkband B1 does something other smartwatch fitness tracking devices, like a Nike Fuel Band or the Fitbit, don’t do by putting a detachable Bluetooth headset on the wrist. This results in a useful 2-in-1 tool for fitness freaks who also want to talk on their phone hands free while jogging, taking a hike or even sitting at a desk.

A lot of devices try to solve two distinct problems, like fitness tracking and Bluetooth audio in this case, but they seldom do either one well, resulting in compromises in one or both of the solutions. Can you really put both in one package and satisfy consumers?

The design of the Huawei Talkband B1 hides that the wearer carries around a Bluetooth headset in their fitness tracking smart watch. A button next to the display pops the Bluetooth headset out of the band. Place it in the ear canal to talk on the phone or listen to audio.

How well does the Huawei Talkband B1 ($129.99) work as a wearable fitness tracking watch while doubling as a Bluetooth headset?

Huawei Talkband B1 as a Smart Watch

As a smartwatch it brings minimalistic features like telling time and showing caller ID information. It works with an iPhone or Android 4.0 or later phone. The watch comes in the colors seen above. 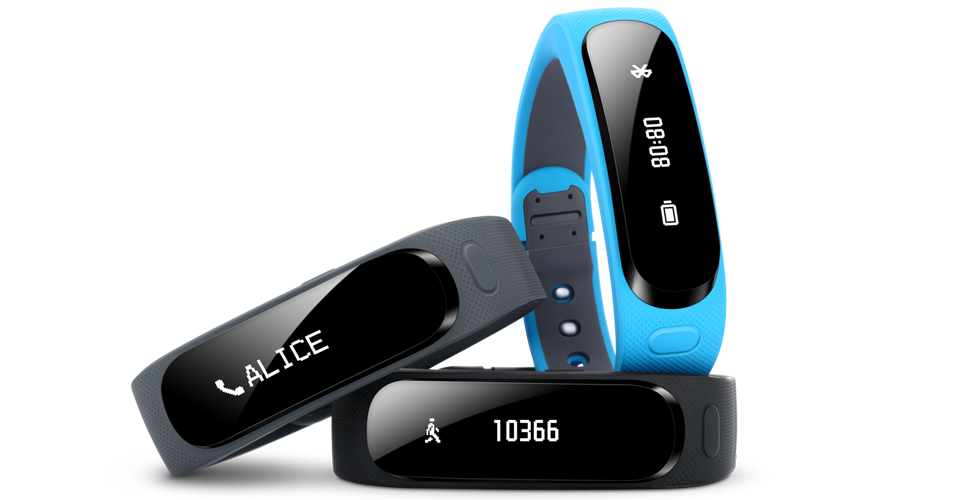 The Huawei Talkband B1 smart watch feature focuses on fitness tracking. It works like a Fitbit with activity tracking. It records steps and rewards the user with a congratulatory message when the wearer reaches their goal. It also estimates the calories burned during the day. At night it goes into sleep tracking mode to measure how well the wearer sleeps at night based on motion.

Viewing the time gets awkward, since the LED monochrome display shows the time and other information vertically instead of parallel to a person’s wrist, making it unlike most watches. The display shows the time, calorie consumption, steps taken, caller ID information when the phone receives a call, stopwatch and timer data. It looks bright enough for daylight usage. When the display goes to sleep the user must flip their wrist to see the time again.

This screen shows the data from the Huawei Talkband B1.

The Huawei Talkband B1 Android App lets the user se their goal for steps taken in a day.

Huawei Talkband B1 Android App asks the user to set their personal data upon first launch.

The companion Huawei Talkband app for Android (see slide show above) and iPhone syncs the fitness data from the tracker to the app and offers to sync it to MyFitnessPal, an online fitness tracking and health lifestyle service. You can use the app to set up personal data, like age, weight and height and then set a goal for steps. The apps work fine and don’t try to do too much.

Huawei gives it an IP57 Water and Dust resistance rating. It seems like it will hold up to rigorous exercise and activity. The rubber band and hard plastic display will take a beating, within reason. The clasps hold it onto the wearer’s wrist.

I let my 16-year-old son test it because he’s more active than I am, and he loved it. It fit his thin wrists well. However, the band felt uncomfortably tight on my thick wrist. 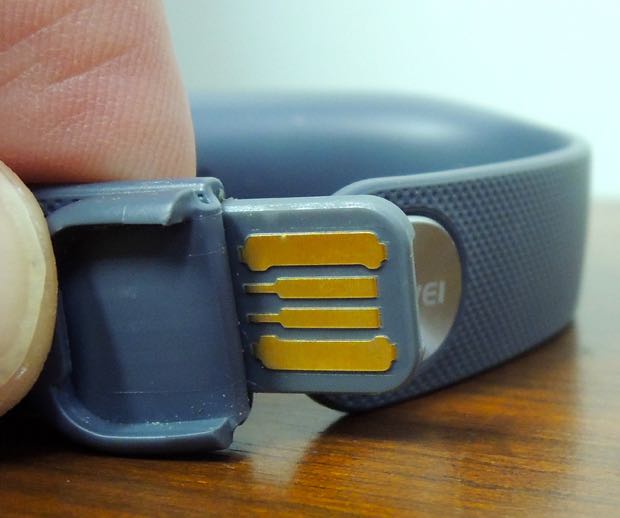 The battery delivers great performance, lasting almost a week on a single charge that depended on talk time with the Bluetooth headset. Huawei built the USB charger into the wrist band. Just detach the end that covers up the USB connector to protect it and plug it into any powered USB port on a computer or the USB to AC adapter, which comes with most phones. 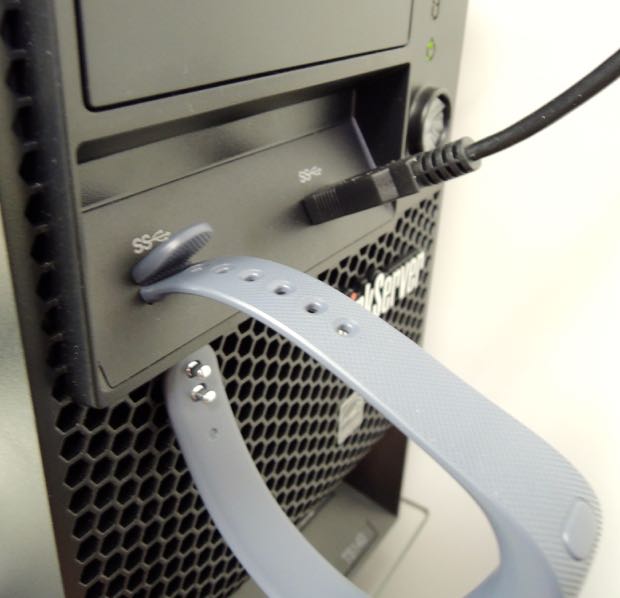 Fitness fans will enjoy using the Huawei Talkband B1. It does a nice job of tracking basic activity. There’s no heart rate monitor, which is a nice feature, but that’s not a huge drawback.

Huawei Talkband B1 as a Bluetooth Headset 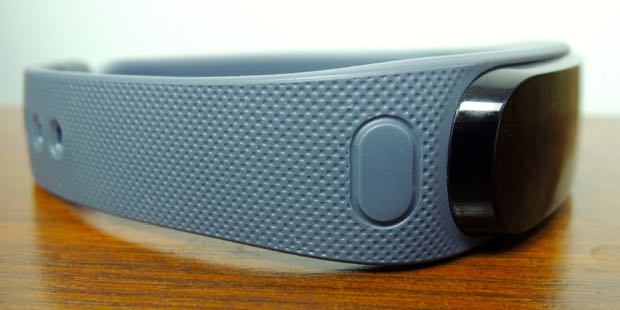 When the user’s phone gets a call, the Huawei Talkband B1 shows the caller ID. Tap the button next to the display and the display pops out of the watch band. It shows an earpiece hidden in the band. The user puts it into their ear and can start talking on their phone. When the call ends, they take off the headset and replace it into the band. 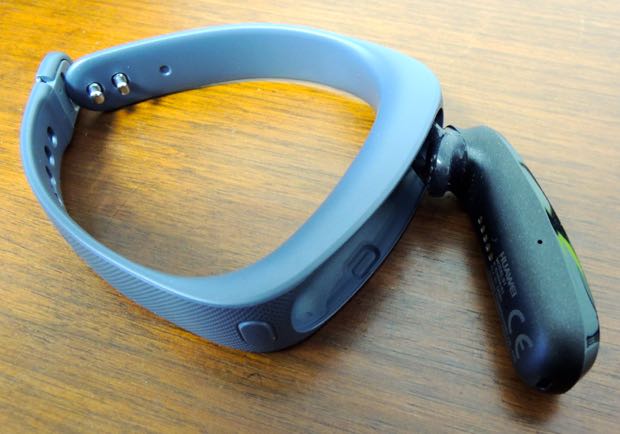 The Talkband sounds decent for phone conversations or spoken word audio, like podcasts or books. It’s not a great headset for listening to music, except when there’s no other option.

The battery lasts a long time, unless the user spends hours on the phone day. In light usage it lasted most of the business week.

The Talkband comes with three earpiece inserts, but it still wouldn’t stay in my ear during exercise. It falls out too easily.

Should Buyers Get a Huawei Talkband B1? 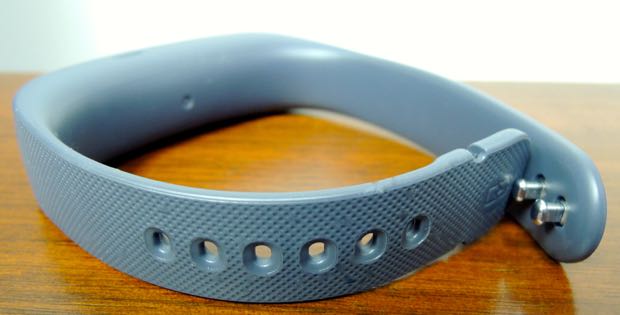 People who spend a lot of time talking on their headset, should get a better option like the Motorola Elite Sliver II. For listening to music while exercising and for talking on the phone too, get the BlueAnt PUMP HD wireless Bluetooth headset that we recommended last year.