Huawei, which in the past was known for making affordable devices, has taken the wraps off of two new high-powered devices with massive displays, falling in line with a trend that started with the introduction of the Galaxy Note back in 2011. In the footsteps of the 2012’s Galaxy Note 2 and HTC’s 5-inch Droid DNA come two more additions to the large-screened smartphone family in the Huawei Ascend D2 and the Ascend Mate.

Starting with the Huawei Ascend D2, it packs a 5-inch Super Retina LCD display with 443 pixels-per-inch, a display that blows the display of the Galaxy Note 2’s 5.5-inch Super AMOLED HD display out of the water. The screen is on par with the 1080p display that comes with the Droid DNA however as it features 1920 x 1080 resolution. Huawei says that the Ascend D2 will also come in a 4.7-inch size as well. 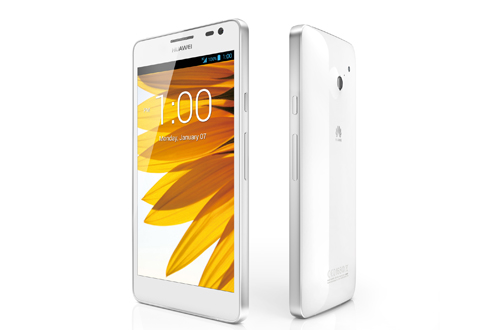 The device comes with a 13MP camera that can shoot high-definition video and an absolutely massive 3000mAh battery that Huawei has optimized with the ability to charge in 30% less time than it takes competitors using the same type of hardware.

On board is Android 4.1 Jelly Bean, the previous version of Android, that was released back in July of 2012.

For those looking for a larger device, and one even larger than the Galaxy Note 2, Huawei has announced the Ascend Mate which comes sporting an absolutely massive 6.1-inch display that features high-definition resolution and specifically, 1280 x 720 resolution. The company has also outfitted the device with a 1.5GHz quad-core processor and an absolutely enormous 4500 mAh battery, even bigger than the Galaxy Note 2’s 3100 mAh battery.

It also features an 8MP camera, 1MP front-facing camera, and Android 4.1 Jelly Bean out of the box.