The Huawei Watch 2 came out and quickly saw an update to Android Wear 2.  Does this new version of Android Wear bring with it enough goodness to make it a compelling option for buyers comparing it to the competition? 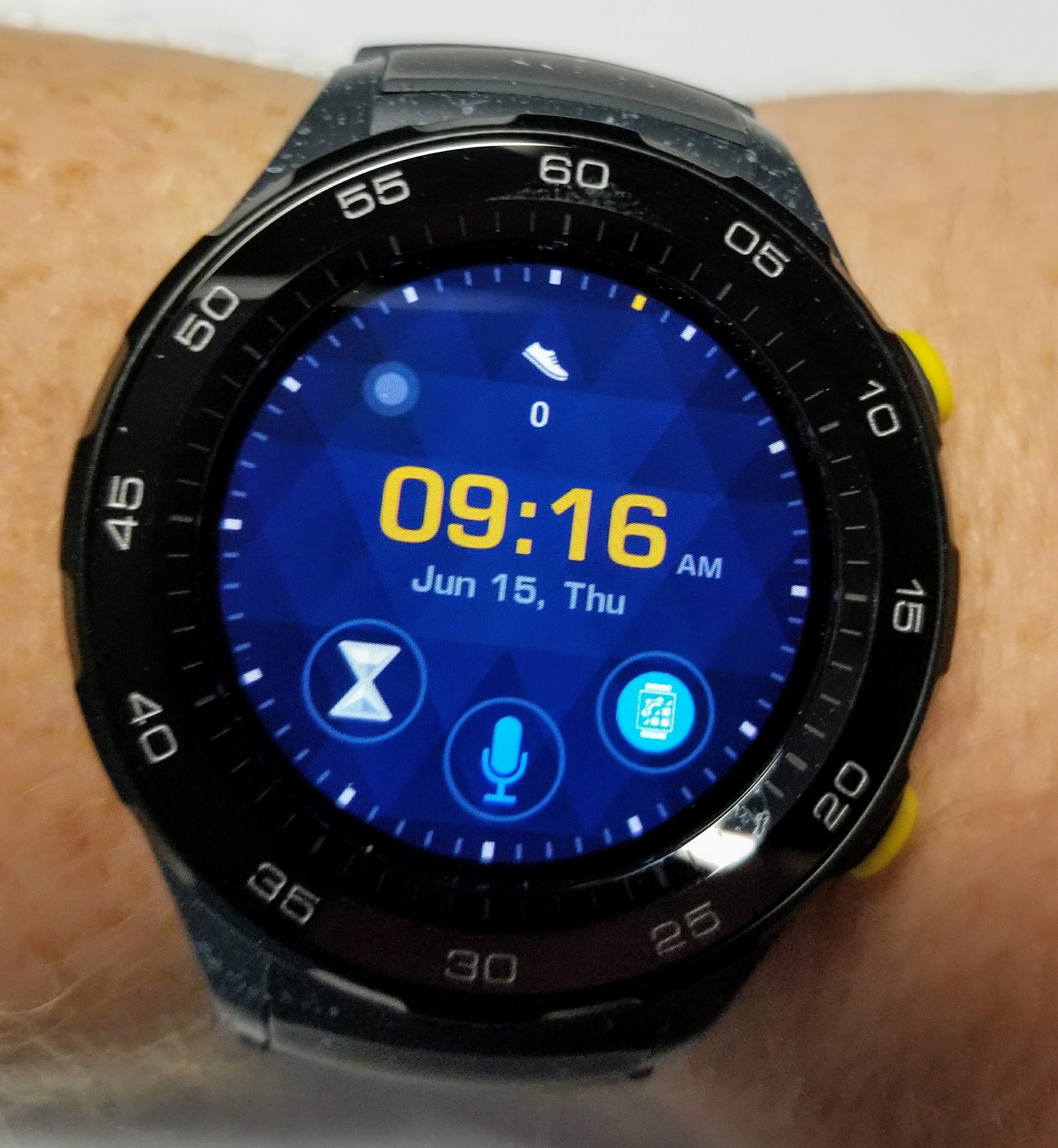 No single smartwatch has the momentum and success of popular consumer electronic devices like the iPhone or Samsung Galaxy phones. However, Huawei has gained more mind share in the Android market with their low-cost smartphones and with the first Huawei Watch. We called it the best Android Wear watch available at the time. The Huawei Watch 2 might win the same acclaim, but is that enough to make it a watch worth $300? And should iPhone users consider it, since it works with iOS? 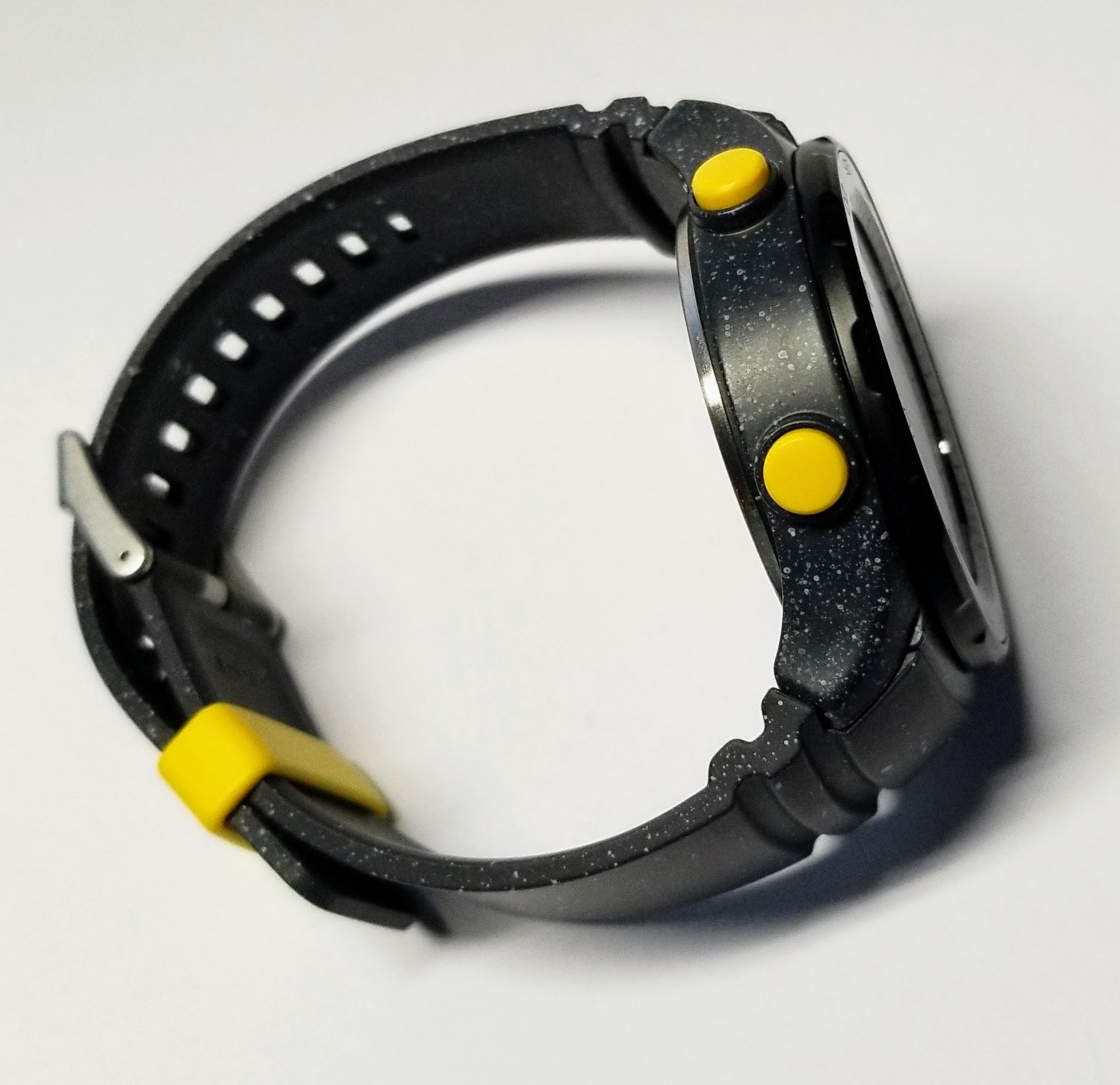 Huawei makes two different designs. We tested the Huawei Watch 2 Sport, which has ceramic housing and TPU band. The Huawei Watch 2 Classic looks more like an elegant watch with a lighter color and better quality band.

The version we tested has a confetti design on the housing and band that surprised me when I first opened the box. I thought it came with dirt and dust all over the watch and band. When I couldn’t wipe it off, I went online and learned that they designed it that way. It looks terrible to me, but some may like it. 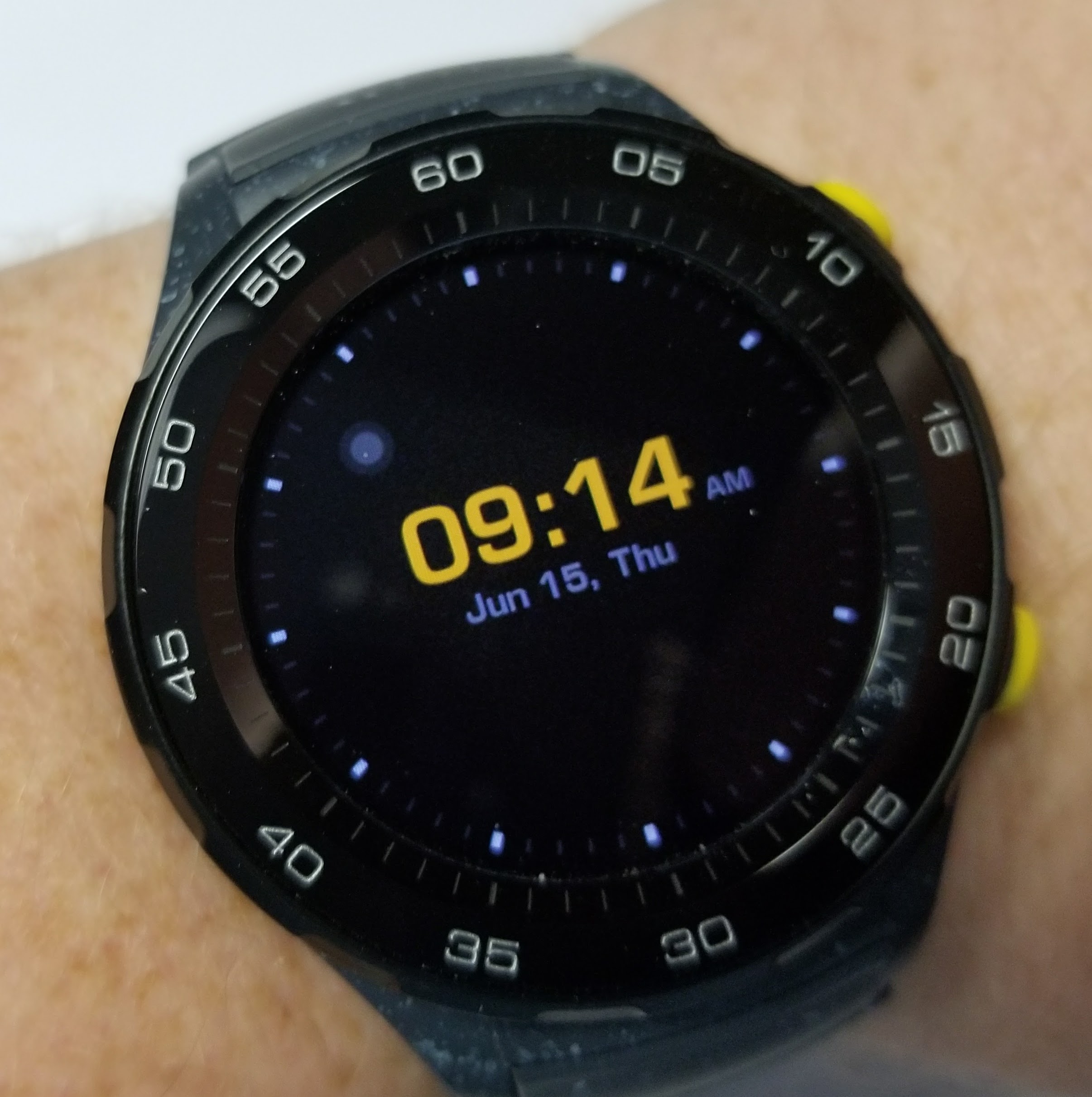 Huawei Watch 2 has an attractive round 45mm display with a 390 x 390 pixel color screen. Around the bezel it has numbers for minutes and seconds in increments of 5. The ugly decoration on our test unit doesn’t take away from the otherwise nice look. 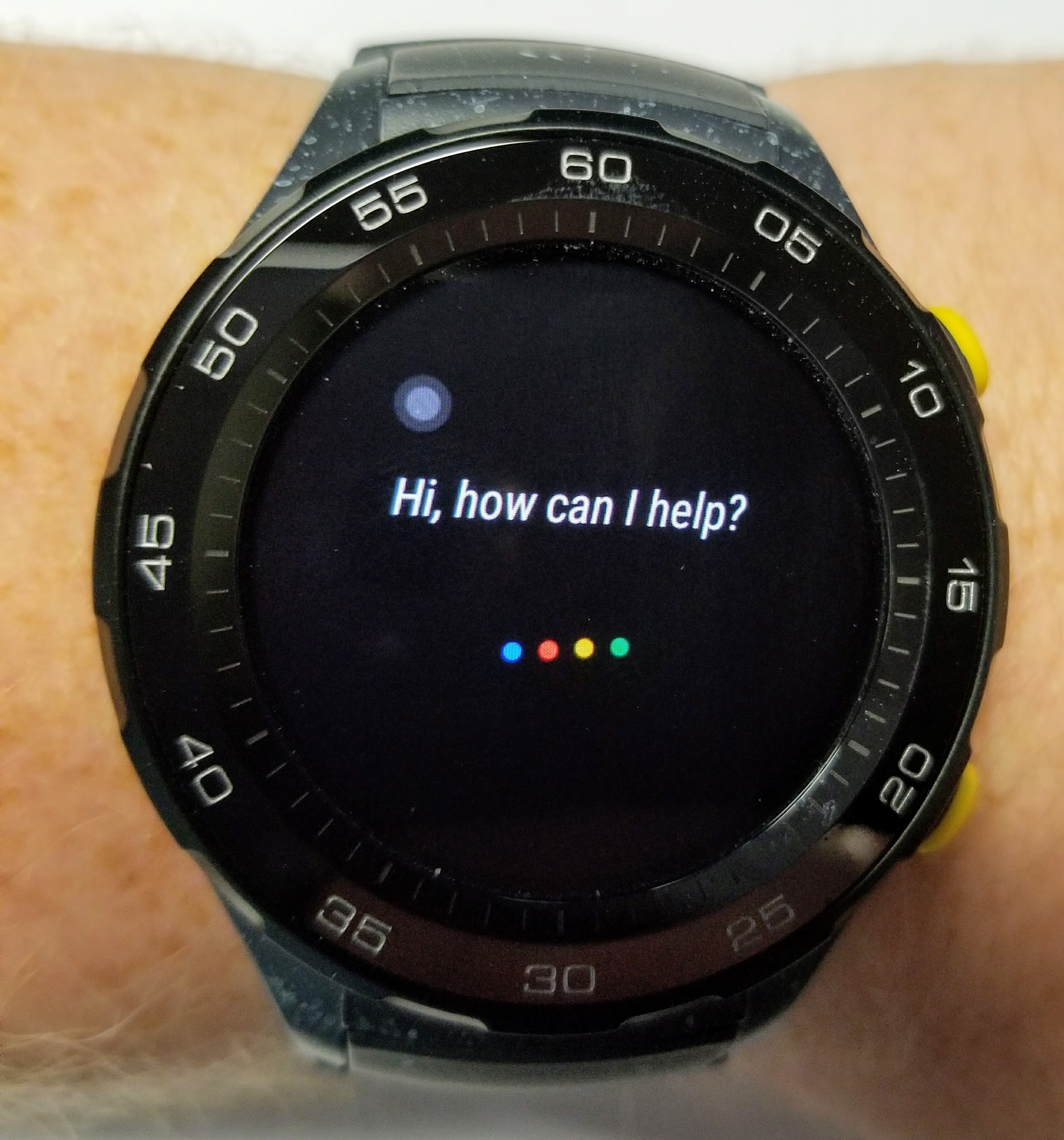 On the right side, two buttons sit ready to interact with the software. Our model came with bright yellow buttons matching the bright yellow band holder near the buckle. A single tap of the top button brings up a list of apps installed on the watch. Scroll through them by swiping on the screen and then tap on an app icon to launch it. Press and hold the top button to bring up the Google Assistant. 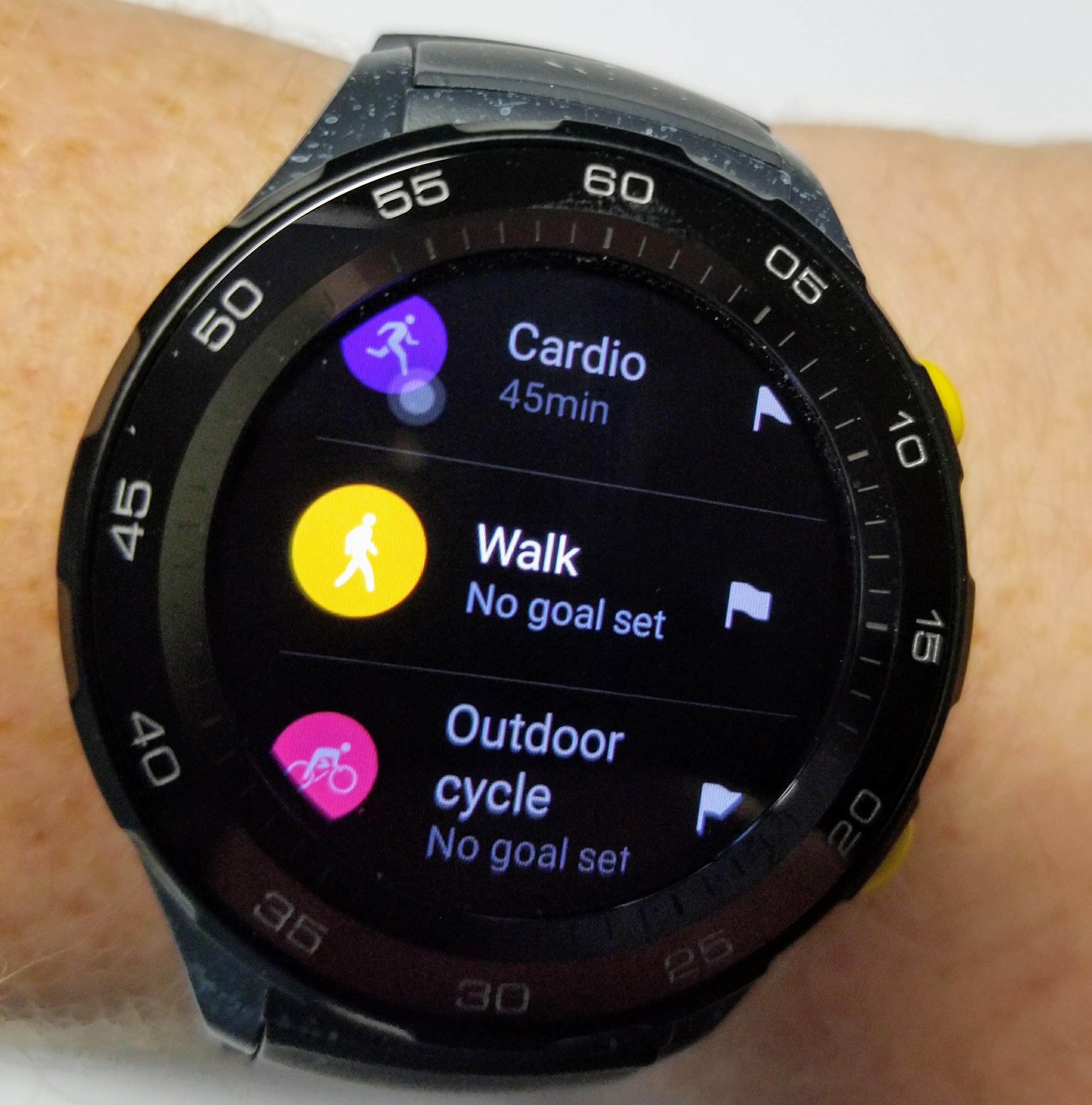 Tap the bottom button to start a workout using one of the options from the list that pops up. These include the following workout options:

Press and hold the bottom button to start your default workout automatically without choosing from a list.

The watch and band feel light and comfortable, especially while exercising. They look large compared to the Apple Watch or other traditional watches. It’s smaller than my Samsung Gear S3. 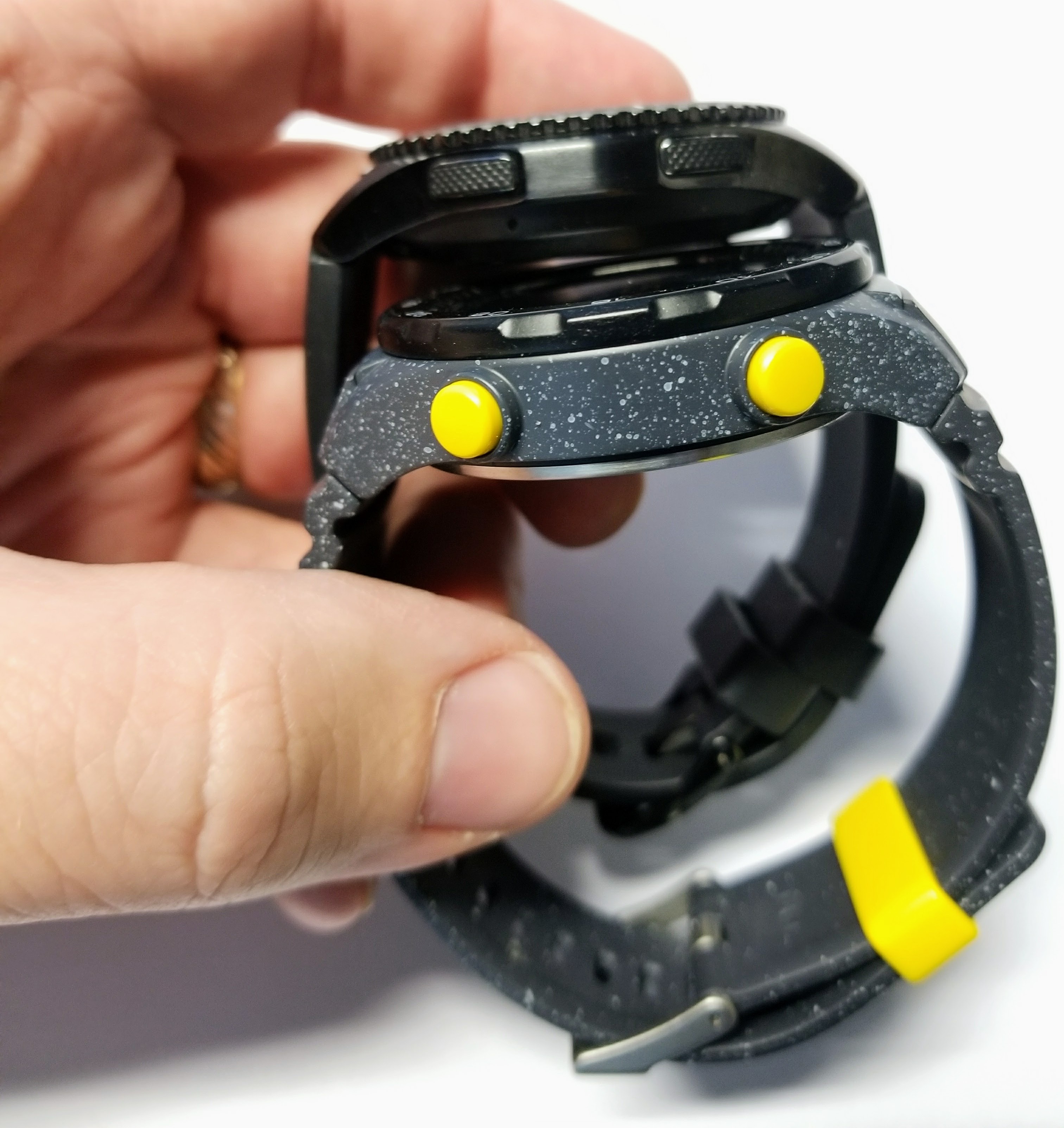 In addition to the ugly confetti on black design, they offer a bright orange model with stainless steel buttons, a black housing with stainless steel and one with black buttons. The Classic (the ceter watch in the image above) has a lighter gray design with matching buttons and a leather band.

The watch comes with IP68 water and dust resistance rating. That means that it’s not going to get dust inside while in a dusty environment. The second number, 8 in this case, means it will stay sealed in water below 1 meter, according to the IP standards specs. You can take it swimming and it shouldn’t mess up the watch. 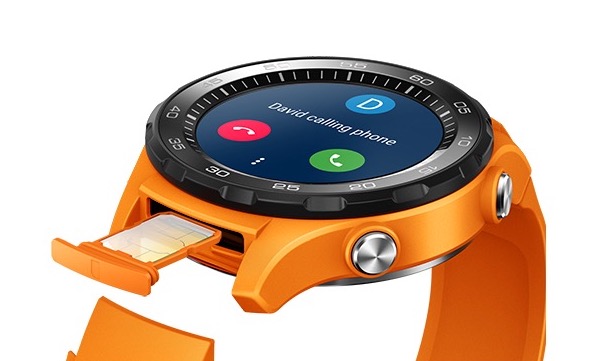 One version of the Huawei Watch 2 comes with a built-in 4G radio. This means you can make and receive calls from the watch and even leave the phone behind while going for a bike ride or run. Our test model didn’t include this feature. 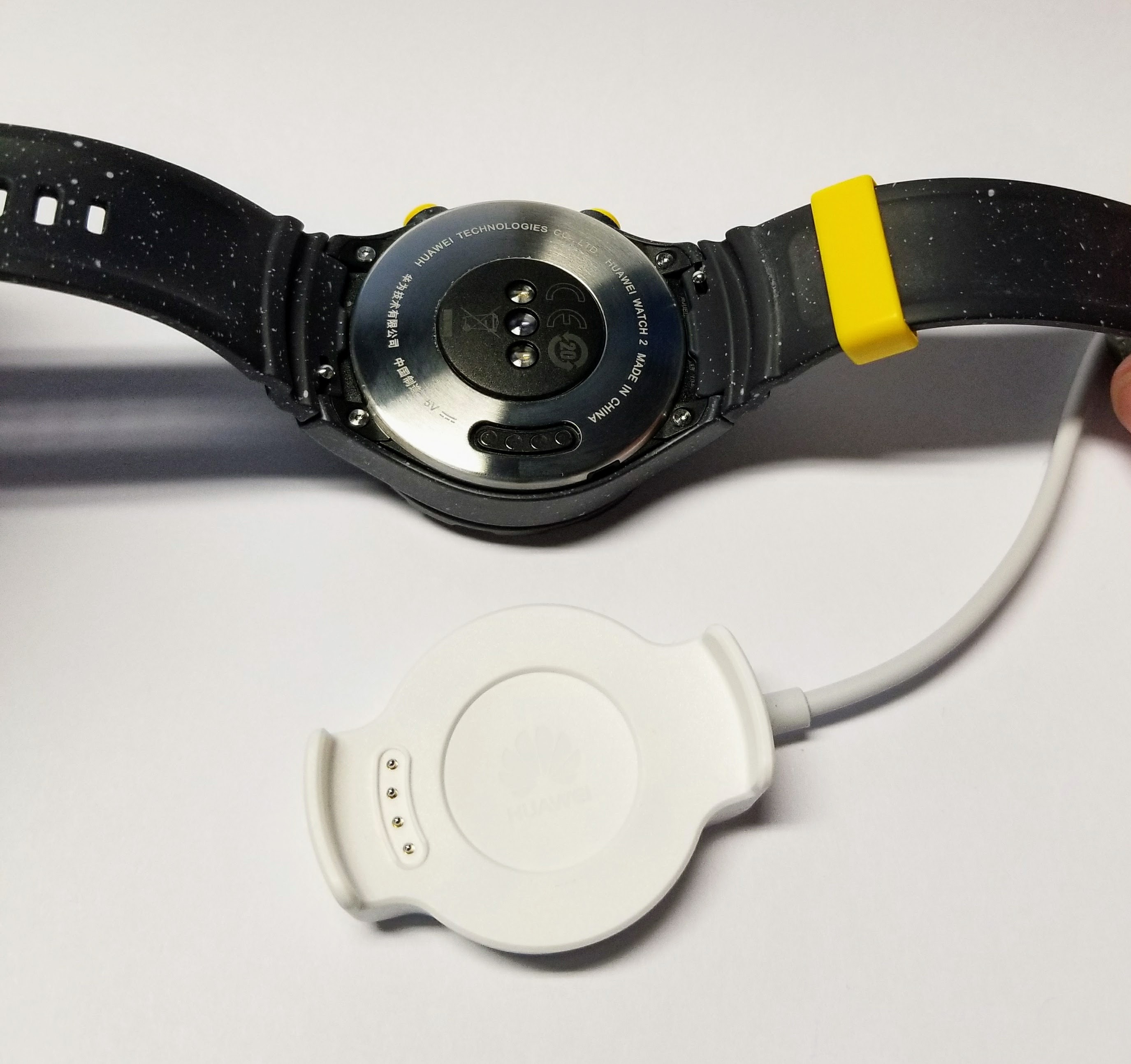 The bottom of the watch has a sensor that picks up your heart rate. It seems pretty accurate. There’s also the connector that lets you charge the watch without plugging in a cable. Just snap the charger onto the back and it holds in place perfectly. I wish it had a nice dock like the one that comes with the Samsung Gear S3.

Shortly after opening the Huawei Watch 2, the software updated to Android Wear 2. That improved the experience in some important ways.

The new version of Android Wear brings improvements to Google Fit interaction on Android watches. It also adds Android Pay. In addition, we enjoy native apps on the watch. 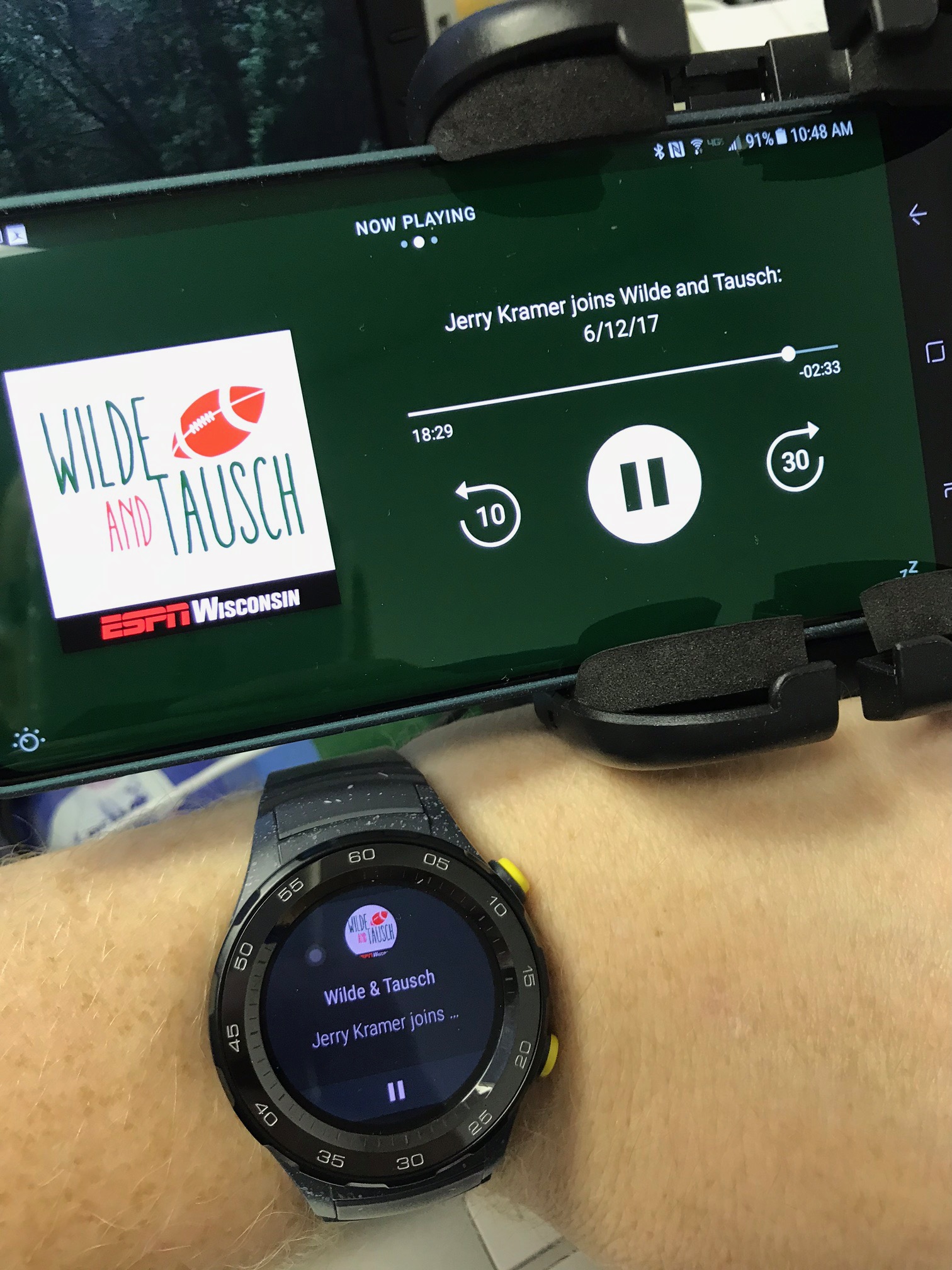 Android Wear comes with a lot of apps and watchfaces to enjoy. Open the Android Wear app to find links to these in the Google Play Store.

Many of the apps you already have installed on your phone will work on the Huawei Watch 2. The watch offers to install these after you configure the watch with the Android Wear app.

Swipe down from the top of the screen for quick access to some of the watch’s important features. The screen includes controls for …

Swipe up to view past notifications. Swipe notifications to the right to dismiss them or tap them to interact with the app that sent the notification if it supports on-watch features.

Huawei makes two apps for the watch, Huawei Wear and Huawei Health. Huawei Wear lets users update the watch firmware, connect to a watch and shows messages about the watch or its software from the company. It also connects to the Huawei Health app, which shows health and workout information gathered from the watch. Users can customize their health plan and set goals for things like workouts and weight loss. 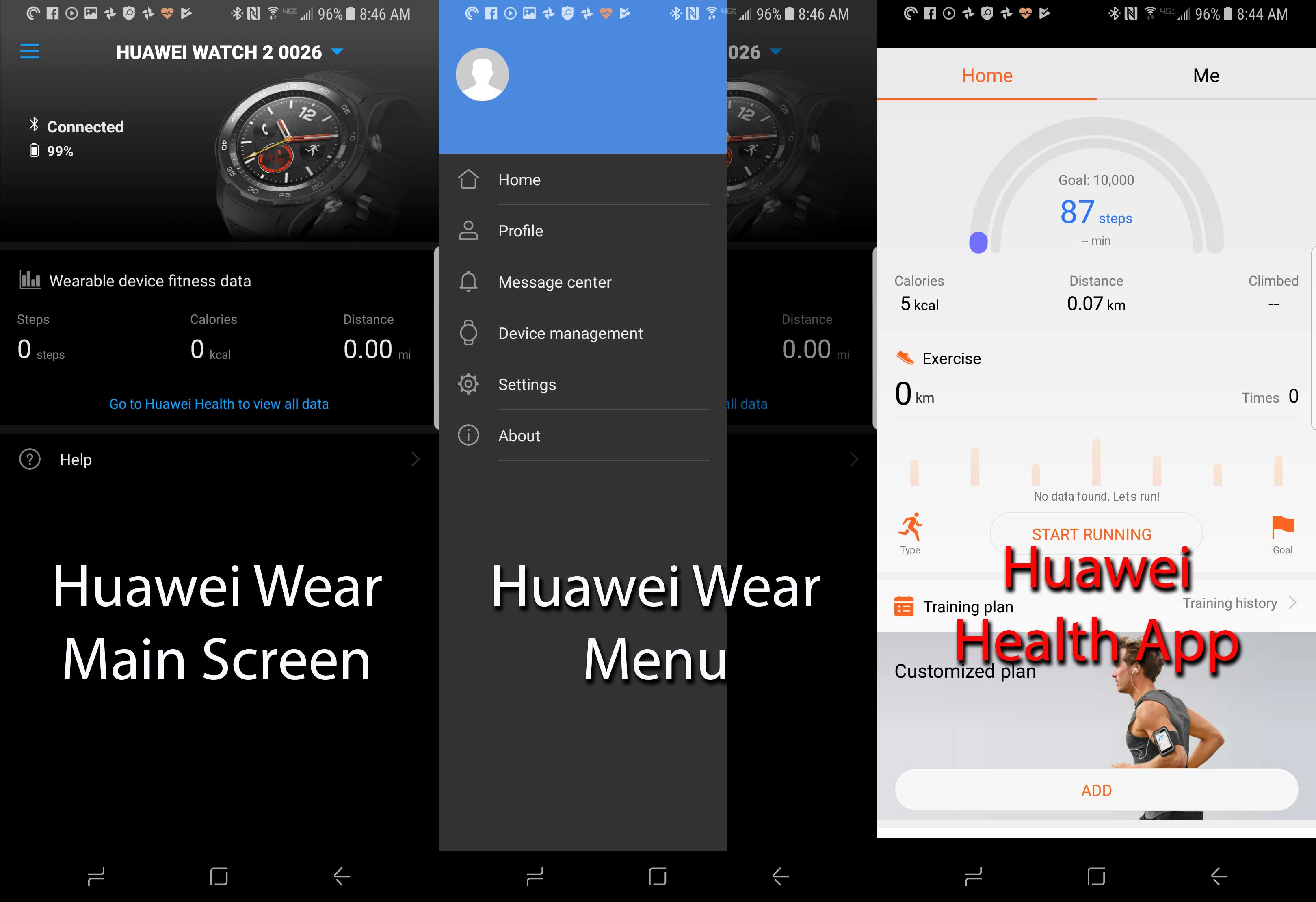 Both of these apps are barebones and don’t add much that Android Wear and Google Fit don’t already offer. In fact, I used the watch for about a week before even installing them and didn’t miss them.

Huawei Watch 2 and the Competition 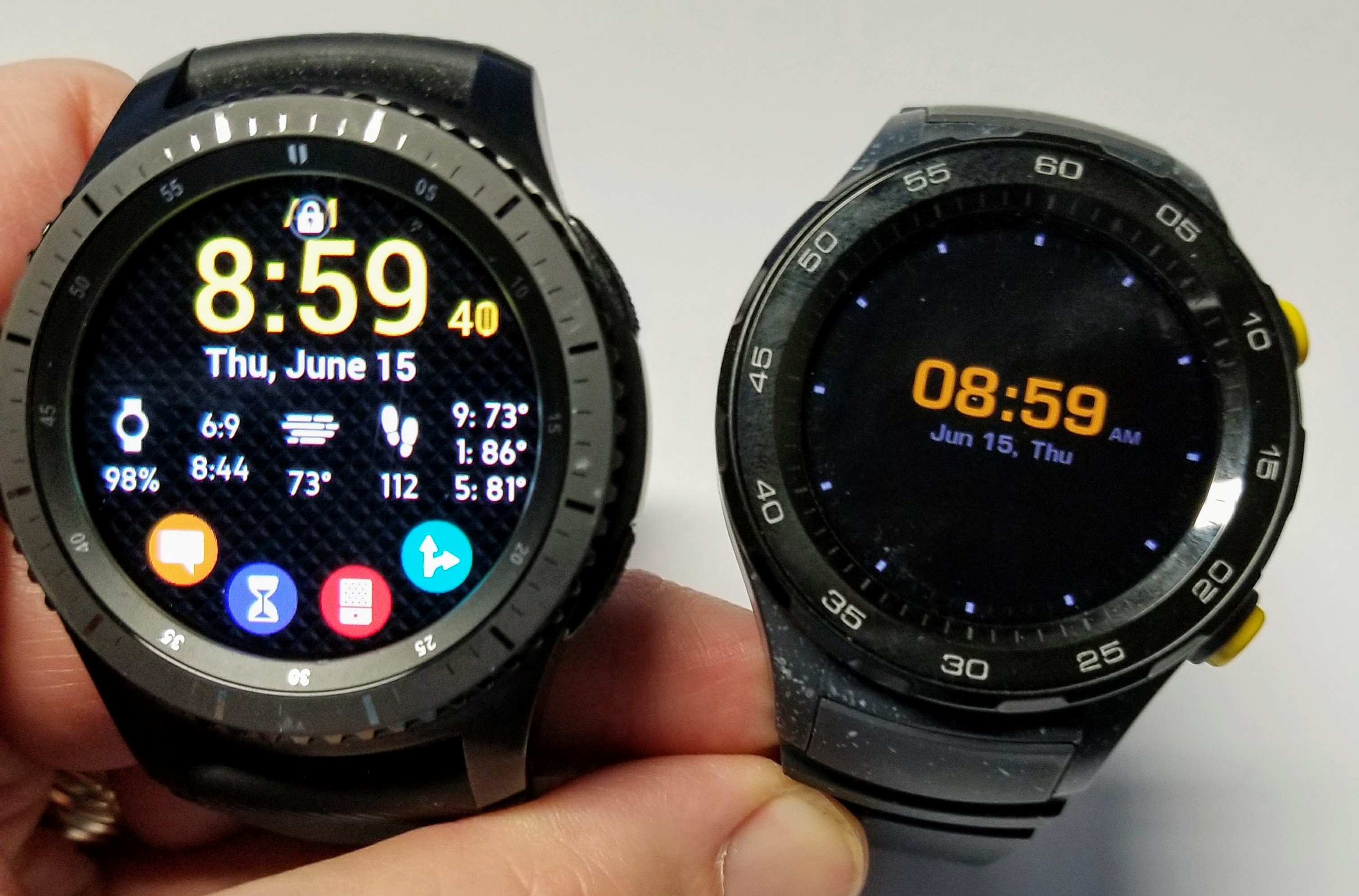 I connected the Huawei Watch to my Samsung Galaxy S8+ and it worked well with the phone. However, I also have a Samsung Gear S3 watch and prefer it over the Huawei. It feels more sturdy and the software interacts better with the watch apps made by Samsung. For example, the Samsung Gear app tells you more about the watch than the Huawei Wear app or Android Wear app. It lets you install apps and watch faces. Also the Samsung Health app reports more information from the watch than Huawei’s Health app. 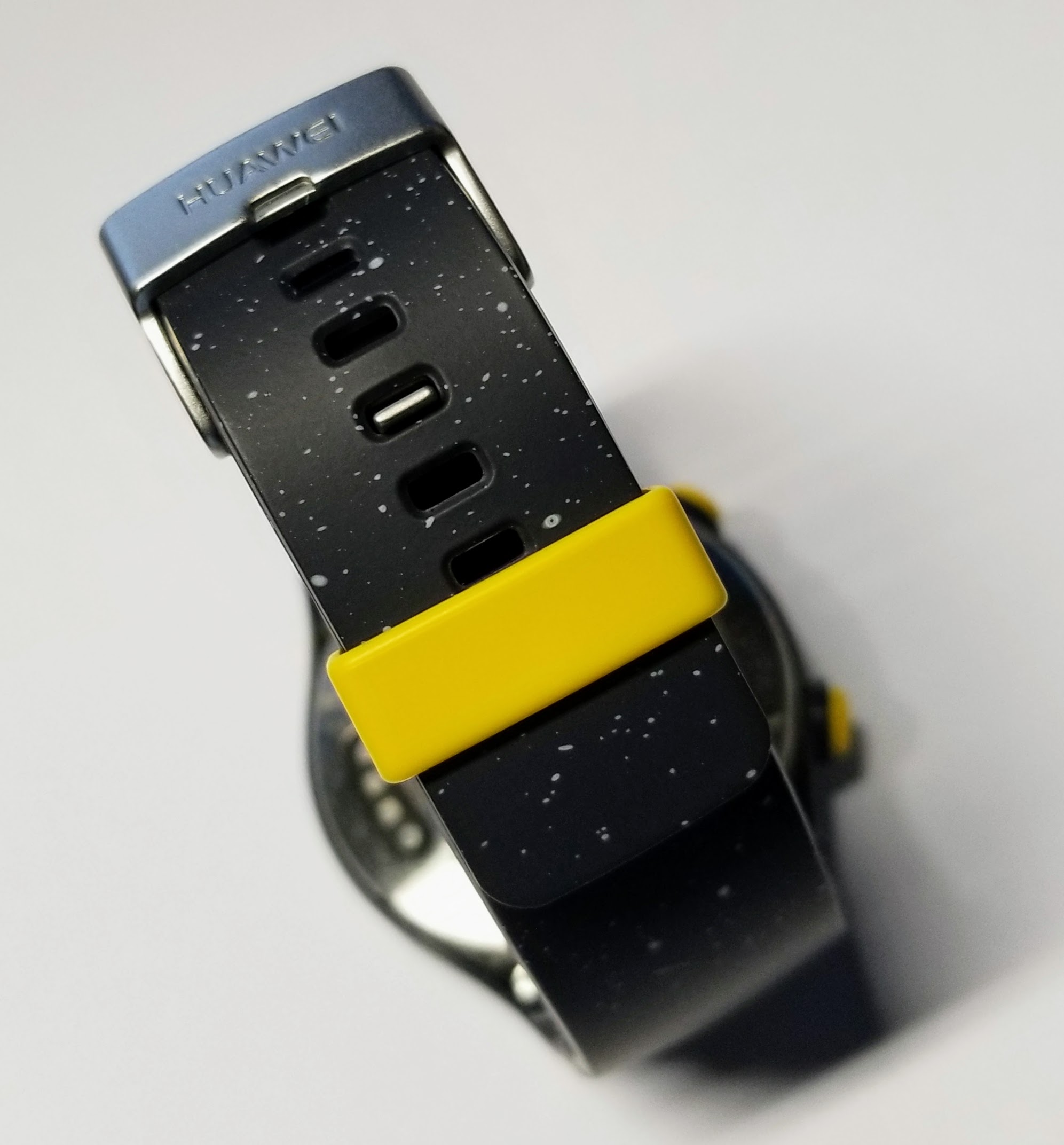 I also connected the watch to my iPhone. When you use an iPhone with the watch, you limit what you can do. You can only install a limited number of apps directly on the watch. You lose Android Pay and only get notifications from the phone, but most of them don’t let you interact with the apps on your watch or even open the apps on the phone. The phone answering feature doesn’t work at all.

Compared to where we were two years ago, the Huawei Watch 2 and Android Wear 2.0 feel like a huge step forward. However, compared to what Samsung brings to the market with the Gear S3 and what we get with an Apple Watch Series 2, it’s behind.

The Huawei Watch 2 costs $299.99 on Amazon or as low as $273 at Newegg. A significant difference compared to the $400 you pay for the Apple Watch Series 2 or $300 for the Gear S3 Classic and Frontier. For Android fans, the Huawei Watch 2 offers the best choice for non-Samsung phones. Samsung Galaxy S8 and S8+ owners should definitely pick the Gear S3. Of course iPhone owners should opt for the Apple Watch.