Thought the dual-core powered Motorola Droid RAZR–known for its sleek and slim form factor–and the Droid RAZR Maxx–known for keeping things trim despite having a battery that keeps ticking–are the powerhouses of mobile today? Well, Huawei is doubling what Motorola is offering today with a quad-core CPU powering the Ascend D quad series smartphone. The phones, which will herald in Huawei’s premium Diamond series devices, will have two variants depending on battery configurations, like the Droid RAZR and the RAZR Maxx from rival Motorola, as well as a third more budget-friendly model. 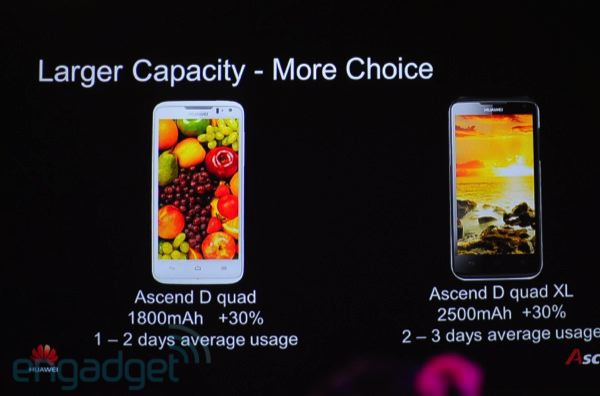 The standard Ascend D Quad will have a slim profile and an 1800 mAh battery coupled with 4G LTE network support, which Huawei says will last users 1-2 days of average use on a single charge. The device is being touted as the ‘world’s fastest quad-core smartphone’ using Huawei’s own K3V2 chipset and the overall package clocks in at just 8.9 mm in thinness, compared to the dual-core LTE sporting Droid RAZR at 7.1 mm. Like Motorola’s Smart Actions, it seems that Huawei will also be packing a custom energy management software suite onto that Ascend D Quad to maximize the device’s battery life.

The Ascend D Quad XL is virtually identical to the Ascend D Quad, except the XL, like the Droid RAZR Maxx, will pack in a more capacious 2500 mAh battery. The XL moniker will be similar to how Motorola used the Maxx branding to designate bigger batteries, and with XL comes 2-3 days of usage time between recharges according to Huawei.

All three models will be released in Q2 2012 and will be available in both black and white colors. Huawei does intend on bringing the Ascend D series to North America in addition to South America, Asia, Europe, and Australia.

“We’ve listened to people’s top demands from smartphones: speed, long-battery life, high quality visual and audio capabilities, and a compact, lightweight handset. The Huawei Ascend D quad exceeds these expectations,” said Richard Yu, Chairman of Huawei Device. “In January at the Consumer Electronics Show at Las Vegas, we achieved a world record for the world’s slimmest smartphone with the Huawei Ascend P1 S. We are proud to once again introduce a world-first at the 2012 Mobile World Congress with the Ascend D quad, the fastest smartphone.”

The Ascend D quad is an entertainment dynamo with its 4.5-inch 720P high definition touchscreen, and the industry’s most powerful 32-bit true color graphic processor. Its PPI 330 screen providing crystal clear display even under direct sunlight, is complemented by its Dolby 5.1 Surround Sound and Audience earSmart™ voice technology for an experience which excels across the senses. Its 8-megapixel BSI rear-facing camera, 1.3 megapixel front-facing camera, and 1080p full HD video-capture and playback capabilities enables you to record your special moments in clearer, richer detail.

The Ascend D quad comes with an 1800mAh battery, which lasts for one to two days with normal usage. The smartphone’s prowess is enhanced by Huawei Device’s proprietary power management technology which provides a longer battery life of up to 30% compared to industry average by adjusting power consumption according to usage needs. It also ensures higher chipset performance and efficiency by maintaining a low chip temperature.

Measuring 64mm narrow and 8.9mm slim, the Ascend D quad is proof that good things do come in small packages. With an ultra-thin frame, the lightweight and compact smartphone’s 4.5-inch touchscreen seems to vanish into the edge, creating an “infinity” feel and allowing an exceptionally narrow body.