Since I am new around here, I wanted to get to know our readership a little better. I know most of you are into Tablets and other mobile PC solutions, but being a smart phone addict comes with the territory. I am sure it’s become quite apparent that I am a smart phone addict too. While I currently use an iPhone 3GS for my daily driver, I am a Microsoft MVP, Windows Phone. More about why I am still a Microsoft MVP as an iPhone user after the break. I have used several Android phones as well as a few Blackberries and Nokia smart phones. I have tried them all and my two favorites currently are the iPhone and Windows Mobile. I am really hoping that Windows Phone 7 knocks the iPhone out of my hands though.

So, do you want to know why I use and iPhone? Some of you might already know this story, but for those that don’t, here goes…

When I ran Mobilitysite, which evolved from Aximsite, we had deep roots in Windows Mobile. I was awarded the Microsoft MVP Award for Pocket PC during the Axim and iPAQ days. The title of the award changed a couple of times, but I evolved with the award and continued down the Microsoft path through Windows Mobile 6.1. Microsoft’s OS was perfectly fine and I don’t think it was ever “broken”, but the consumer’s idea of a mobile OS had changed. Apple changed the game and Microsoft sat still for more than a year while losing tremendous ground. Microsoft sat on their hands in denial.  Android came along and made it ever worse for Microsoft. When Windows Mobile 6.5 was released, I had enough of Microsoft throwing lipstick on a pig. Fast forward to the day of Windows Mobile 6.5’s launch. We, the Windows Mobile MVPs, were not prepared for the launch with pre-release materials. We weren’t even given review devices. If not for being the editor of Mobilitysite, I wouldn’t have had any hands on time with Windows Mobile 6.5 prior to launch. As a member of the media, not as an MVP, I was provided with a couple Windows Mobile 6.5 devices that would be available at launch. I was underwhelmed with the OS. On the day Windows Mobile 6.5 was launched, I sat at work wondering why I sat on my hands for years apologizing for Microsoft’s lack of innovation. I honestly felt dejected. That day, I decided to stop fighting my desire to use and iPhone and stopped at an AT&T store on the way home to pick up an iPhone 3GS. Since then, when not reviewing another device, I have used that iPhone. 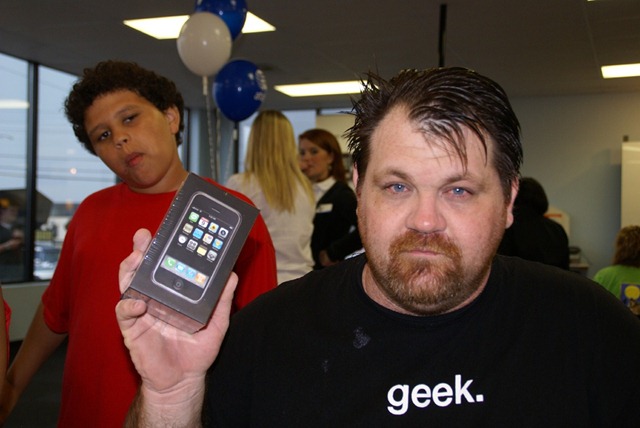 That iPhone 3GS wasn’t my 1st iPhone either. I was #1 in line on the initial launch day to pick up an iPhone. I still have it with less than 20 hours used. I purchased that iPhone to review for Mobilitysite since we had decided to cover more than just Windows Mobile. Despite using the iPhone, I have tried to support Windows Mobile the best I could and it was enough to earn one undeserved year as MVP. I always said I would give Windows Mobile 7 (before it got the official name Windows Phone) a chance when and if it ever released. We are now less than a week away. I have had hands on time with Windows Phone 7 and from what I have seen so far, I am quite impressed. I was so impressed that I am ready to jump in with both feet.

All that said, here’s a question for all of you. Since I would like to know more about what our readers are using, I have set up a poll.

Please answer with what you use now, not what you plan to use in the future. Thanks for reading. I look forward to the results.