With the fast pace of technology, it is hard to find a phone that will last a year — let alone two years without letting you down.

Android phones are especially bad at this with new “super” phones coming out every other week. But some devices age worse than others. For example, the HTC ThunderBolt doesn’t need the Galaxy Nexus to make it look bad. The ThunderBolt has aged worse than Charlie Sheen.

Which leads me to my point. I want a phone that can stand the test of time. A phone so good I could hold on to it after my two year contract expires.

I want a phone that ages like Betty White. 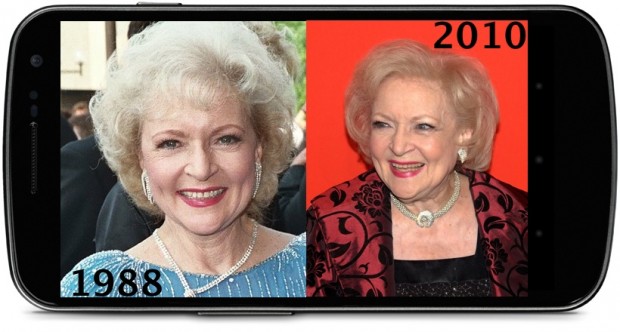 Seriously. Have you seen Betty White? Take a look at her in the Golden Girls. Now take a look at Betty White today in Hot in Cleveland. Sure, she has aged a little bit, but she’s still a hot commodity and full of pep. Betty White transitioned from a dead end role of playing an old person in Florida to playing a linebacker in a Snickers commercial and parlayed all of that into a role as a housekeeper in Hot in Cleveland. Sure, she’s playing an old person, but Betty White is 89 and still killing it. She even got invited to the Marine Ball.

So what does this look like in a smartphone?

What do you say? Are you ready for a smartphone that ages as well as Betty White?