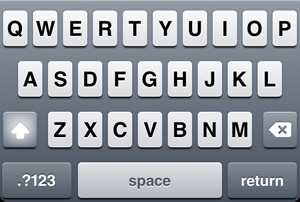 Touchscreen keyboards, despite the iPhone’s best-in-class auto-correction and adaptive keys, are still hard to type on, but IBM is hoping to lessen the pain for Blackberry users, who rely on RIM’s excellent thumb keys, to make the switch with a new patent filing for adaptive key controls. IBM’s patent filing with the USPTO reveals a concept where the keyboard keys can be repositioned with varying size keys based on a user’s typing patterns and finger size.

The invention requires users to initially callibrate the keyboard based on their fingers and typing style. After that, the intelligent software algorithm can  re-arrange and re-size the keys to fit accordingly.

The idea is similar to Apple’s intelligent keyboard algorithm for the iPhone. When the iOS-maker debuted the iPhone, CEO Steve Jobs hailed the innovative software keyboard on the smartphone saying that the predictive engine can guess what letter the user is typing next and make the allocate more surface area to the right key. So for instance, if you were trying to spell ‘guess’ and have already typed ‘gu,’ the area for the e key would expand while the area for the 3, w, r, s, d, and f keys would shrink so that the chances of you hitting the e would be greater. On the screen, however, the keys would maintain their actual sizes and it’s just the software behind the iOS keyboard that would enlarge and shrink the key’s surface areas.

However, where the IBM keyboard differs is that the keys are arranged and sized dynamically to an individual user and would be more personalized than a 1-size fits all approach.

Given Blackberry’s historic focus on hardware keyboards and the company’s recent struggles to maintain competitiveness in the touchscreen segment, this patent could be one that RIM ought to license to give its touchscreen devices a strong push.