One of the new, cool features that’s debuting with Android 4.0 Ice Cream Sandwich is the face unlock feature, allowing your smartphone to capture an image of your face and using facial recognition to unlock the smartphone only to its rightful owner rather than using complex alphanumeric, PIN, or pattern codes to unlock the device. Since the OS was introduced, there were concerns if the face unlock feature can be fooled by someone holding a picture of the phone’s owner up to an Android smartphone’s camera to bypass security, but Google says this is not possible. 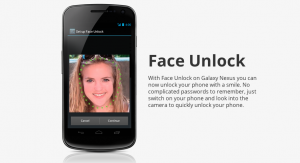 Since the feature was introduced with Ice Cream Sandwich alongside Samsung’s Galaxy Nexus in Asia, many have dismissed the feature as a security risk, speculating that it could be bypassed by holding a picture of the phone’s owner to the camera. However, Google is saying that it has thought about the implications of the technology and has implemented some fool-proof measures to ensure that security cannot be bypassed for users who opt to use this new technology.

It was safe to assume that Google wouldn’t let its face-recognition technology be bypassed using a photo but this confirms it. Good news for those who were worried about their friends hacking their smartphone by using a Facebook profile photo or something similar.

As Google tries to make in-roads with corporate users, it’s unclear if corporate IT buyers will  be accepting of Google’s latest move to make security simpler for users.

The technology for face unlock was acquired by Google when it purchased PittPatt.