Lenovo takes a variant of the keyboards it is well-known for and includes it on a matching dock that doubles battery life to turn this 10.1-inch tablet into a mobile productivity machine, that is equally capable of meeting users’ entertainment and portability expectations.

The IdeaTab S2110 is costs $499 with 32GB of storage and includes the keyboard dock. That’s the same price as the 16GB iPad and the 32GB Surface RT, neither of which comes with a keyboard. Quality keyboards for Apple’s and Microsoft’s tablets cost $100. 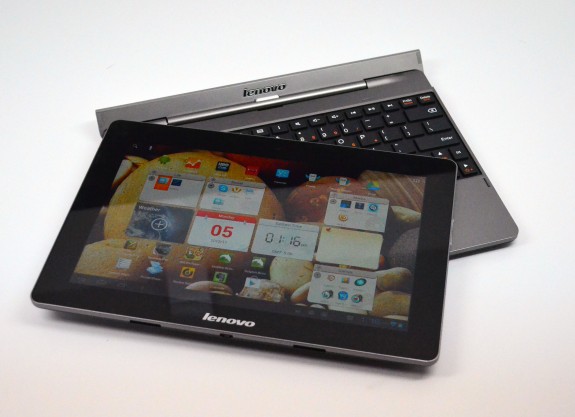 The IdeaTab S2110 with a keyboard dock.

We went hands on with the IdeaTab S2110 Android tablet at CES 201. The tablet took a while to get to market, but offers value to users looking for a tablet that can pull double duty as a notebook for longer document editing and use sessions.

The above video shows Lenovo’s custom Android interface and a closer look at the tablet’s design.

Lenovo doesn’t match the iPad fourth generation in build quality, but beats out the iPad and third-party keyboard dock combo. The  Lenovo tablet’s dock locks onto the tablet, turning in to a device that feels as if it’s a single device rather than a tablet that’s simply resting in a slot, which is the case with most iPad keyboard docks. 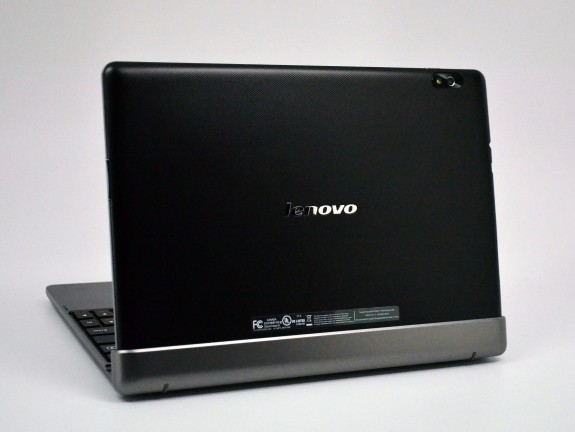 The IdeaTab S2110 is a thin and light tablet, weighing in at 1.28 pounds, which makes it easy to carry around. The dock adds an extra 1.32 pounds, much of which can be attributed to the secondary battery. Lenovo designed the S2110 with plastic that feels nice to the touch, but creaks when pressure is put on the edges of the tablet.

The S2110’s spartan design matches the optional keyboard dock which offers similar build quality. The S2110 locks into the dock, allowing users to carry the notebook as a single device. While docked it is sometimes difficult to open the device because Lenovo did not include a large enough opening near the trackpad. 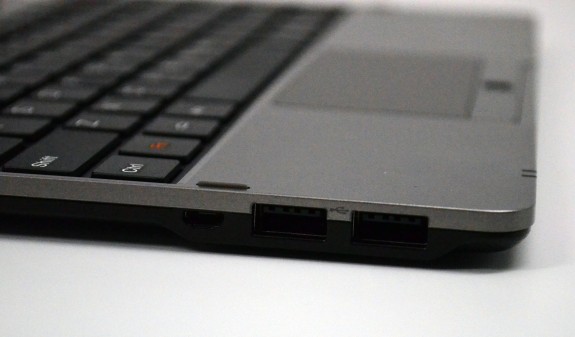 The dock adds a well-sized keyboard with a two button trackpad and doubles battery life up to a claimed 18 to 20 hours. The dock adds a Micro USB port and two full-sized USB 2.0 ports as well as an SD card slot. The tablet’s headphone jack and Micro-HDMI out are still accessible while docked.

The IdeaTab S2110 ships with a 10.1-inch IPS display with a 1280 c 800 resolution and wide viewing angles, but a fair amount of glare in harsh lighting. The display shows fingerprints and streaks, more than the iPad or Nexus 7, so keep a cleaning cloth handy. 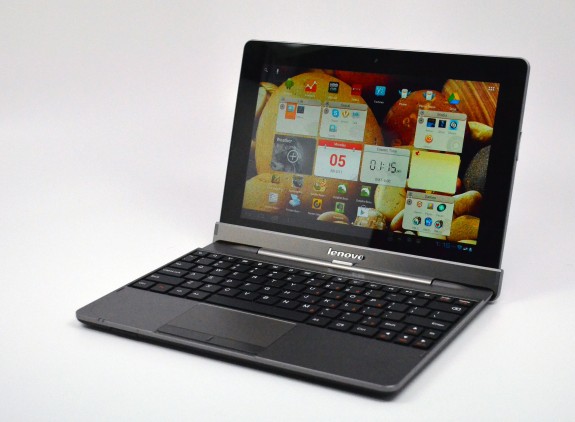 Indoors the S2110 is great for watching movies, with good blacks and very good colors. HBO’s Deadwood comes alive on the screen even during the many darkly lit scenes.

Outdoors plan on turning the brightness up and looking for shade for maximum usability.

The 1.5GHz Snapdragon processor and 1GB of RAM deliver a the power needed to run games like Fruit Ninja that rely on quick swipes and fast reflexes. When it comes to productivity, the S2110 also holds up well, even when switching apps.

The Android skin Lenovo used in place of vanilla Android includes animations for switching home screens, swiping through the app drawer or launching the notifications. Because of these animations, the tablet is slow to respond during these activities.

The keyboard offers a comfortable typing experience with good key travel that delivers a laptop like typing experience. This keyboard is not as good as a ThinkPad, but it is on par with the IdeaPad notebooks, albeit with smaller keys. There are shortcuts for home, multitasking and apps on the keyboard and function buttons at the top for other Android actions. 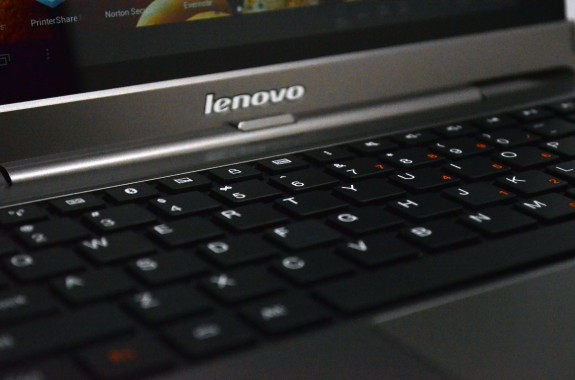 The touchpad is smooth and responsive to the touch with two dedicated click buttons. The touchpad does not support scrolling, so users will need to reach up to the touchscreen to scroll.

Audio is good, but could be better if Lenovo had decided to make the two slot speakers front-facing, instead of side-facing.

The IdeaTab S2110 lasts eight to nine hours with the tablet alone, and with the keyboard dock, stretches to around 16 hours of real-world use.

The 5MP rear facing camera delivers adequate snapshots, but it isn’t something worth using to capture photos of special occasions. The camera app is slow to take photos, refocusing before snapping each shot. This results in a fair number of mis-timed and accidental photos.

It is best used for taking photos of notes and documents for storing in Evernote or other apps. The tablet records 1080P video, and allows users to take photos while recording video, but the video quality is not very good. In the sample below, note the ambient noise and poor video quality.

The front facing camera is better for video chat, with a crisp clear image and accurate color reproduction. While docked, the 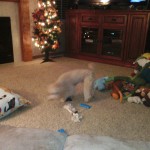 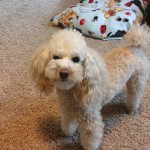 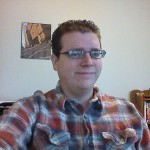 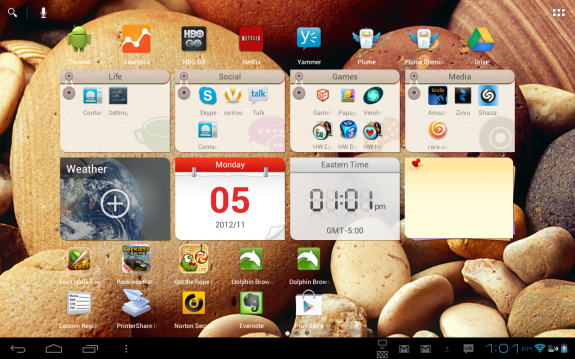 Lenovo uses a custom look for Android on the IdeaTab S2110.

The Android skin Lenovo chose to put over top of Android 4.0 offers large folder type widgets that users can place apps in to organize growing number of Android apps. Lenovo included a number of pre-installed apps that many users won’t use, like the half-dozen card or board game apps, which cannot be uninstalled.

Users with a WiFi printer will appreciate the built-in PrinterShare app that connects easily to WiFi printers nearby to print without plugging in or performing laborious setup.

The IdeaTab S2110 with the keyboard dock is a worthy competitor to the iPad and the Asus Transformer. The tablet is not perfect, but for users looking for a tablet with a keyboard, long battery life and access to all the most popular apps, the S2110 fits the bill. 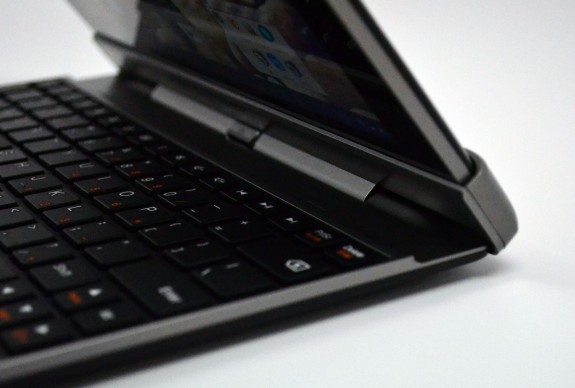 The keyboard dock extends battery life long past a full day, there is sufficient power for gaming, entertainment and productivity, the latter of which is made easier with the good keyboard.

Design and build quality are not on par with the iPad, but the tablet feels like it will hold up to use over time, and survived a day in the hands of a 4 year-old no worse for the wear.

The IdeaTab S2110 tablet is available direct from Lenovo for $499. 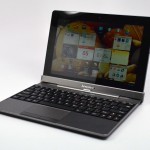 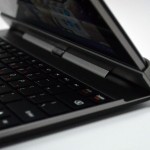 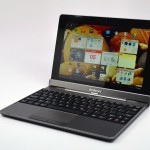 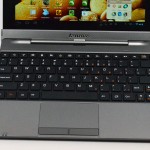 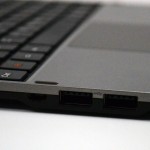 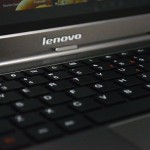 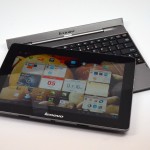 The IdeaTab S2110 with a keyboard dock. 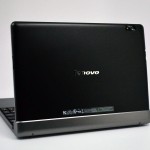 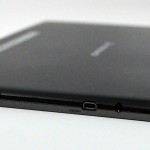 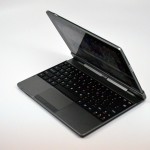 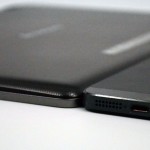 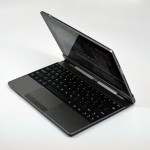