At the Intel Developer Forum 2011 conference, I spotted a prototype reference design tablet created by Intel with the company’s mobile Atom CPU–the same processor that’s found on many netbooks–and with Google’s Android Honeycomb operating system in tow. Though Intel did not give much in terms of specs, it did say that it was working with Google to optimize the graphics, power consumption, and battery life of its Atom processor for use on Android, and the two companies made headlines earlier this week when Google promised to include Atom support on future versions of its Android operating system, extending Android beyond the ARM architecture support of today. 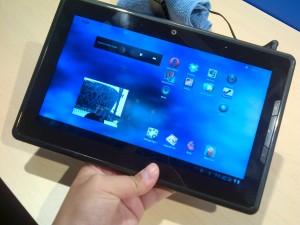 Though the tablet prototype that I handled is still a work in progress, according to Intel reps on hand, the company did allow visitors to handle the tablet. I took some quick pictures with my cellular phone as the Intel reps at the booth were not able to do on-camera interviews on video, and I played around with the tablet for a bit.

The screen–reps would not confirm the resolution–appear a bit more grainy than some of the current 10-inch Honeycomb slates. The display appears to be a tad smaller than the 10-inch tablets like the Motorola Xoom, Asus Eee Pad Transformer, and Samsung Galaxy Tab 10.1, so I am guessing the slate’s about 8 to 9 inches. 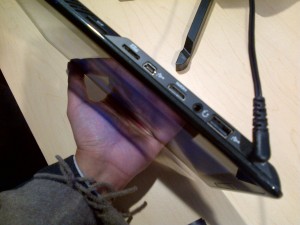 The tablet’s not too heavy, though it is heavier than the ultra-slim Galaxy Tab 10.1 in my hands, it feels, though this is unscientific. What’s interesting though is that the Atom processor made the tablet hot to the touch. This is one hot slate. Though the slate runs hot, it is still not uncomfortable to hold and the heat is unevenly dissipated to the top right side when the tablet’s held in landscape mode. The lower portion and the left hand side of the slate ran cool.

What’s curious is that the reasoning gave by Intel reps didn’t quite add up, and here’s why. When questioned about the heat issue, Intel says that since the tablet is so slim, they weren’t able to add in a fan to cool down the slate, which is fine. However, when I had followed up with some more questions about the heat dissipation issue and why certain parts of the slate were hotter than others, the rep made a fuzzy answer stating that the processor is located at one end of the tablet while the fan was located at the other end, which didn’t quite add up. I am not sure if there is even a fan in the prototype model that’s being demoed, but the tablet does run cool. 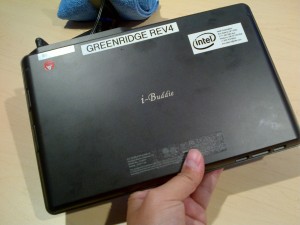 As far as performance goes, the tablet still seems choppy and isn’t as smooth as the Tegra 2 chips found on the Motorola Xoom and the Galaxy Tab 10.1, but I will still give Intel the benefit of the doubt at this early stage as the company is still working with Google to iron out performance optimization.

According to Intel reps at the booth, the slate is the same tablet reference design powering the early MeeGo operating systems. Seems like a nice way to recycle hardware considering the uncertainty of MeeGo adoption now that partner Nokia has withdrawn support and is now working with Microsoft on Windows Phone 7. When asked about the prospect of MeeGo, Intel says that it will continue to support MeeGo alongside Android.

The tablet does come with a number of ports and appears to be a full-spec device. I noticed in the settings that NFC support is also present on the Honeycomb slate.