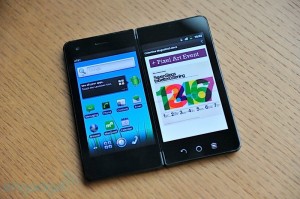 Imerj has teamed with Frog Design to create a dual-screen phone that expands so that you can either multitask–with an app on each screen–or use as a tablet combining both screens into one with a small bezel separating the displays. The concept’s been done before via Sprint’s Kyocera Echo with limited success and Sony’s releasing its own dual-screen S2 Android tablet soon, though the latter has larger display panels.

The Imnerj concept utilizes dual-4-inch WVGA Super AMOLED touchscreen displays and combines an impressive array of specs, including a dual-core Texas Instruments OMAP ARM-bvased processor with 1 GB DDR3 RAM, 32 or 128 GB of internal storage, and a micro SDHC card to further expand. There’s a capacious 1750 mAh battery, AT&T 3G connectivity, and a 5-megapixel camera on one of the display’s bezels so that it can either point to the rear for photo capture or be used in the front for video chat when folded out.

Though the concept isn’t novel, the Imerj concept does look to pick up where the Kyocera Echo left off. However, for the concept to succeed in the marketplace, it will need the backing of developers and an SDK that will make it easy for developers to create apps that will multitask as well as render itself properly on both screens. The multitasking aspect, known as Simul-Task by Kyocera, was very limited on the Echo, which was released on Sprint’s 3G Now Network, as it only worked on a select number of native apps. I can see users potentially wanting to simultask, or multitask, with other third-party apps, perhaps like watching YouTube and playing Angry Birds at the same time instead of just utilizing the native apps in this mode.

Like the Kyocera Echo, the Imerj concept also makes use of one display panel as a full keyboard for interacting with apps. Where the Imerj really picks up pace is that it can render three different things simultaneously on three different displays. It can render unique things on each of its dual-displays, and it can also render a video for playback when docked onto an HDTV.

Hardware-wise, the hinge is a bit more simple than the Echo and the device basically folds in half where both screens are exposed–one screen is exposed towards you and the other screen points away from you.

As there are still a relatively few number of dual-screen devices, it may be hard to convince developers to code their apps for the Imerj or other dual-screen Android hardware right now, and adoption may not pick up until these devices can prove to be useful with their form factors with apps that are optimized for this form factor.

Definitely another intriguing concept with the dual-screen form factor, but without developer support, I can’t see this taking off.