Boeing’s next generation commercial airplane, the 787 Dreamliner, will also feature next generation in-flight entertainment according to Australian Business Traveller . Embedded displays will soon feature wider viewing angles and less reflection of ambient light. Most will be touchscreens, but for seats where the screen is too far away for that (like first class), the company is working on gesture control. Behind the glass, Android will run the show.

In the past, Boeing has allowed airlines to specify the type of in-flight entertainment system they want to instal. For this plane, the manufacturer will instead give them a narrow list of pre-approved systems to choose from. Panasonic and Thales are on that list and already have approved screens ready to go. The severs and touchscreens will run Android only, which the Australian Business Traveller points out will cut off Apple, Microsoft, and other Google competitors. 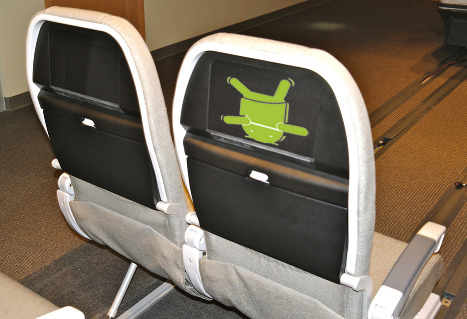 The 787 already has over 800 orders, so don’t be surprised if Android rules the skies fairly soon.

While this is an interesting development and good news for Google, will it offer any benefits for flyers? The in-flight OS isn’t really something I notice. Then again, if it had access to Angry Birds, that would improve many a flight. What would be even better is if the interface allowed you some access to your Android experience. For instance, the apps and games you’ve already bought or the movies/tracks in your Google Video and Music accounts.

The article mentions airline-specific apps and I wonder if they’ll open up the SDK for that system. What app would you wish for in your embedded screen?