Today Instagram updated to version 3.0 on iOS and Android, and the update brings a number of improvements to the service.

The big new feature in Instagram 3.0 is the new Photo Maps feature. Photo Maps show user’s photos with geolocation on a map. The feature shows photos taken in one area stacked in groups. When zoomed out the map shows photo stacks for larger areas, but those stacks separate as the map zooms in.

Tapping on a photo stack will zoom in on the area, while double tapping will bring up a grid of all the photos in the stack.

Every Instagram user gets a Photo Map, but they can choose what photos appear on the map. The Photo Map only becomes public after the user updates the app and approves the photos for the feature. Excluding a photo from the feature effectively removes the geolocation data on the photo.

Along with the Photo Map, the new Instagram app also has improved user profiles. The new profiles, hashtag, and location pages all include larger grid photos to make it easier to browser photos in the grid view without having to tap every photo to zoom in. The new profile pages also include a button for the Photo Map feature. The button is grayed out if the user didn’t approve the feature or hasn’t enabled it yet. 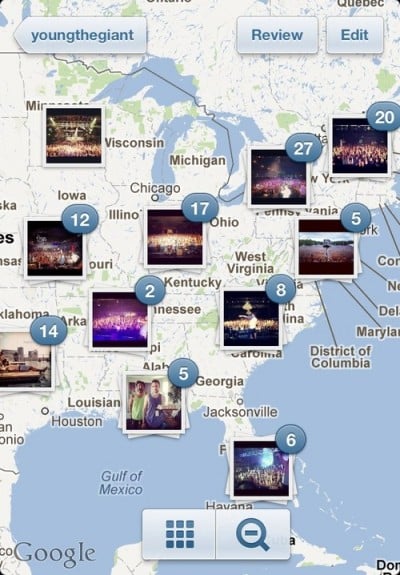 Other improvements include a new upload page with easier buttons for sharing, infinite scrolling, speed improvements, and the ability to report and delete individual comments.

The update to Instagram 3.0 is nice, and Photo Maps are great, but we can’t wait to see them implement them for other features. It would be cool to se future versions of Photo Maps worth for hashtags as well as profiles.