The recently launched Orange Santa Clara smartphone at Mobile World Congress was spotted recently at Germany’s CeBIT trade show complete with its single-core Atom processor from Intel known as the Medfield chipset. The chip, which is capable of HyperThreading, is clocked at 1.4 GHz and a trade show visitor was able to run some benchmarks on the phone using the browser.

Using the BrowserMark benchmarking tool, the Orange Santa Clara posted a score of 90,000, which narrowly beats out Apple’s iPhone 4S with its proprietary ARM-based dual-core A5 processor. In comparison, the dual-core CPU on the Samsung Galaxy Nexus, which runs on a more efficient Android 4.0 Ice Cream Sandwich browser, scored over 100,000 points. Given that the Orange Santa Clara is running on Gingerbread, we can expect to see the phone’s performance, especially where it comes to browsing speeds and rendering, improve once the handset is upgraded to Android 4.0 Ice Cream Sandwich. 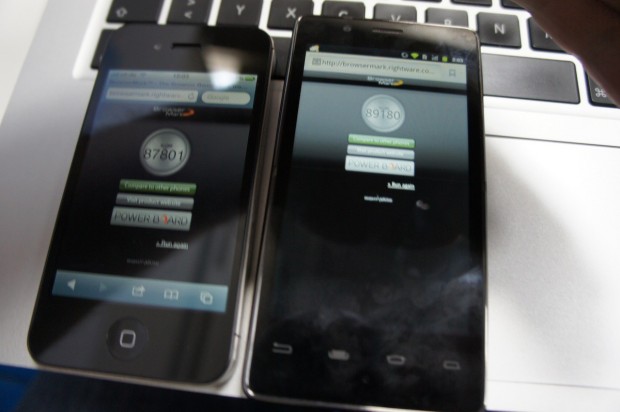 Using the Vellamo benchmarking test, the Orange Santa Clara with its Intel Medfield processor was able to outpace the Galaxy Nexus and trailed behind the quad-core Tegra 3-powered Asus Transformer Prime.

Though these impressive early scores definitely show that Medfield will be a strong contender in the smartphone and tablet race where performance and battery efficiency will be examined, browser-based tools are not as good at testing the CPU and GPU in the fullest.

At Mobile World Congress, Intel and Orange had alleviated some concerns about battery life by touting impressive battery numbers for the phone.

Additional Android-powered Medfield phones and tablets are expected this year. The most notable manufacturer to support Medfield will be Motorola Mobility, which is currently being acquired by Google, which may help deepen Intel’s and Google’s relationship.