There’s no doubt about it. Intel is arming up to wage some battles with ARM over market share in mobile devices. We’ve been seeing ARM this and ARM that for some time, but Intel is ready to fight back a bit, at least with some of the reference designs and concepts it is showing off at CES 2012. 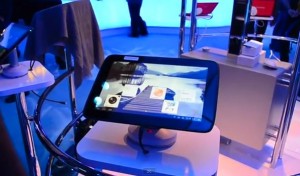 GBMer K.T. Bradford got a chance to go hands on with the Intel Medfield Tablet, this one being the IdeaTab K2110 made by Lenovo. According to the rep she’s speaking with they’ve been working with Google for over a year, and also focusing on graphics optimization. Given the quick look we see in the video things do look pretty snappy, but keep in mind we’re far from a release date at this point. Not saying this is the case here, but what we see in the Vegas desert in January can often be a mirage later in the year. That might be important context as I’m reading elsewhere that the rep says that this is Beta hardware.

According to the rep, the Medfield processor, which is based essentially on Intel’s Atom, and is something that Intel is sharing with its phone reference design. I’m curious because Atom, which was much ballyhooed when it first hit the market doesn’t have such a stellar reputation these days, especially in the mobile market Intel is looking to compete in here. But we’ll see how this all shakes out down the line.