In announcing some of its next generation chipsets, Intel also teased a new tablet design that is aimed at delivering plenty of performance and power while at the same time promising a quieter computing experience. The tablet itself will utilize Intel’s powerful fourth generation Core i-processor code named Haswell while using a fan-less design.

News of this will be significant for tablets and Ultrabooks that uses the powerful Haswell chips. Current tablets and notebooks that are based on the more performance conservative Atom processors have so far not been required to have a fan, and therefore benefit from a more quiet computing experience. However, more powerful devices based on Intel’s third generation Core i-processors do rely on a fan to help dissipate heat and cool down the chip. 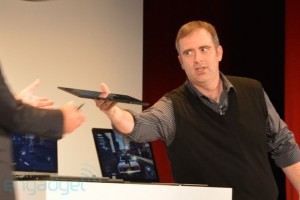 Some of those models include Microsoft’s Surface Pro tablet and Toshiba’s KiraBook Ultrabook. Both these models could benefit from a Haswell upgrade and a fanless design.

There are several complaints about the Surface Pro right now. One is that the device runs hot. The second complaint is that the Surface Pro, which has a Core processor, is a bit thicker than the Surface RT tablet that’s based on a fanless ARM processor design. The reasoning for the thickness is to accommodate for a larger battery, vents, and fans.

Perhaps the fanless design is also what may be allowing Apple to be able to slim down its MacBook Pro Retina Display, at least according to some recent rumors.

And with the Toshiba KiraBook Ultrabook, a common complaint for that system is that the fan could generate a lot of noise that could be distracting when the system is used in a quiet environment. A fanless design could remedy that while still delivering exceptional computing power.

Engadget reports that not much information was disclosed about the fanless design, but such a design would be beneficial to consumers. It’s unclear still which OEMs and manufacturers would pick up on a fanless design from Intel using the Haswell CPUs.