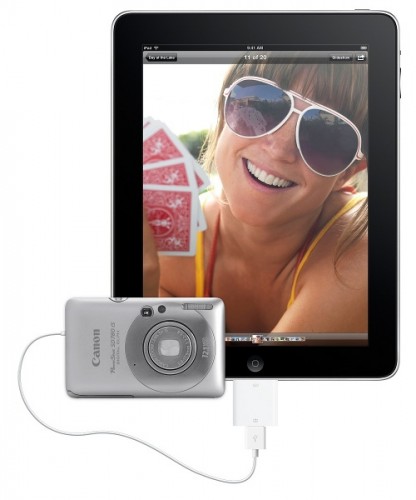 Word out of 9to5Mac is that the Camera Connection Kit for iPad is outputting less power on iPads upgraded to iOS 4.2. The result cuts out many out-of-design uses of the USB connector, such as attaching a keyboard or microphone, but some users are reporting that their cameras and SD cards aren’t getting enough juice either.

Considering Apple never claimed the Camera Connector could be used to power keyboards and markets it specifically as a camera connector, no one should get too upset if it doesn’t work with non-cameras. That would be like ranting that an eReader makes a lousy video player. But it should definitely work as advertised with cameras and SD cards, so it’s understandable when some users are angry that it doesn’t.

There is no list of non-working cameras yet and evidence has been anecdotal. It’s also not known if this was an intentional move or a bug. It may have been an attempt to cut out-of-design uses or save battery life. However, given that camera manufacturers would be within their rights to use USB connections that draw 100 mA, the USB low-power spec, dropping the rating below that is guaranteed to foil at least some models of camera. Intentional or not, this needs to be fixed.