There is no name for the iOS 6 jailbreak tool yet, but the evad3rs team is talking about progress made, compatibility and possible release timing. Team members are also warning users not to fall for fake evad3rs jailbreak websites that attempt to sell a jailbreak tool.

While we heard the iOS 6.1 jailbreak release could come on Sunday, recent tweets from evad3rs team members point to possible changes to that timeline.

Here are the latest details on the iOS 6.1 jailbreak.

Testing on the iOS 6.1 jailbreak continues.

According to @planetbeing, the iOS 6.1 jailbreak proof of concept testing is complete on a command line level. This means that the back-end of the iPhone 5 jailbreak is working, and the team needs to make a user-friendly tool that millions of jailbreakers can use, possibly with one or two clicks.

This part of the process involves the jailbreak team testing the iOS 6.1 jailbreak on a variety of iOS devices to make sure there are no surprises after the public release. The IOS 6.1 jailbreak will reportedly work on 22 devices, so it is not surprising that this takes time.

The team tests the jailbreak on “freshly restored devices”, says @planetbeing. This is the reason @Pimskeks recommended users update to iOS 6.1 on a computer, preferably by restoring to a stock device and then installing the iOS 6.1 update.

Users that updated to iOS 6.1 over-the-air will likely be able to use the iPhone 5 jailbreak, but as of early this morning the team had yet to test this scenario.

Support for all iOS 6 Variations

The iOS 6.1 jailbreak tool is not restricted to iOS 6.1. According to @Planetbing the tool will allow users to jailbreak the iPhone or iPad on any version of iOS 6.

With this in mind there is no rush to upgrade to iOS 6.1, especially for users who cannot upgrade at this time.

In terms of release date, we’re aiming for approximately a week out, but it’s possible it will come sooner or later than that.

We’ll be posting as soon as the jailbreak is available, but the fastest way to find out about the iOS 6.1 jailbreak release is to follow the evad3rs Twitter account and turn on mobile notifications, which will send a text as soon as they tweet the release.

Watch Out for Fakes

The problem of fake iPhone 5 jailbreak websites is as big a problem as ever with websites popping up overnight claiming to offer an iOS 6.1 jailbreak.

@pod2g calls out evadersjb as one of the fakes, but it is not the only one around. 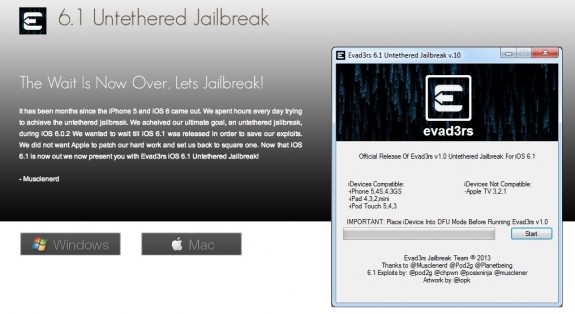 The evad3rs Dev Team is not accepting donations at this time, and will only be sharing the untethered iOS 6.1 jailbreak on evad3rs.com, which directs to the Twitter feed for now.