As predicted and after quite a bit of a wait, Apple released iOS 6.1 for the iPhone, iPad and iPod touch to the public this morning. The update figures to be the biggest update to iOS 6 since the software was released in September adding a few new features while likely bringing bug fixes to the table as well. And while it’s maybe not the most exciting in-between update that Apple has ever released, it’s still one that we’ve been looking forward to. Here now are our first impressions of iOS 6.1 for the iPhone 5.

Since I acquired the iPhone 5 and with it, iOS 6, I’ve run into my fair share of issues with Apple’s mobile software. In fact, it has been a bit of a love-hate relationship that I’ve had with iOS 6. While there has been quite a bit to like – Do Not Disturb, the new Sharing functionality and Facebook Integration to name a few – there have been some headaches as well.

With iOS 6.1, I ran into the keyboard glitch, experienced the Wi-Fi issues that iPhone owners complained about and are still complaining about, and I’ve run into more than just a few random reboots in the days since the software was released. So while not as frustrating as Android 4.0 Ice Cream Sandwich operating system was on my Galaxy Nexus, iOS 6.1 has frustrated me. 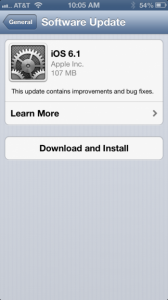 Fortunately, unlike Verizon and the Galaxy Nexus, Apple has worked diligently to repair the issues with iOS 6.1. With iOS 6.0.1, it tried to tackle some of the major bugs with iOS 6. With iOS 6.0.2, it directly addressed Wi-Fi issues associated with the iPhone 5 and iPad mini. The fix worked for many people, for many others, it apparently did not.

iOS 6.0.2 also seemed to introduce battery drain issues that iPhone 5 users have been complaining about since December. So, needless to say, users have had their eyes fixed to the web looking for the iOS 6.1 update.

Today, that update arrived in the form of a 107MB update that can be installed either Over-the-Air or through a manual install by using the good old iTunes method. And after spending a few hours, here now, are my first impressions of the latest iOS 6 update from Apple, iOS 6.1.

With iOS 6.0.2, I ran into some issues updating to the software. It wasn’t the first time that it happened with an iOS update and probably won’t be the last. However, iOS 6.1 did not follow in its footsteps.

Over the past few days, I’ve been checking for iOS 6.1 every hour on the hour. Why? One, because I knew the update was likely going to be coming after the events over the weekend. And two, very plainly, I wanted the update, not for the features but mainly to see if my random reboots would stop.

Finally, after several days of checking, the update appeared and iOS 6.1 was ready to install. But would there be issues? Fortunately, no. I was able to seamlessly download and install the update OTA using my Wi-Fi network. The process went smoothly, seemed relatively fast and after a bit of maintenance, my phone was back up and running iOS 6.1.

I wish all iOS updates were this way. Maybe they will be from here on out, but I’m not holding my breath.

iOS 6.1 is a big update in the eyes of many iPhone and iPad owners because unlike previous iOS 6 updates, which brought bug fixes and enhancements, iOS 6.1 actually brings some new features to the table. One of those features, and maybe the biggest, is the ability to use Siri to purchase your movie tickets. 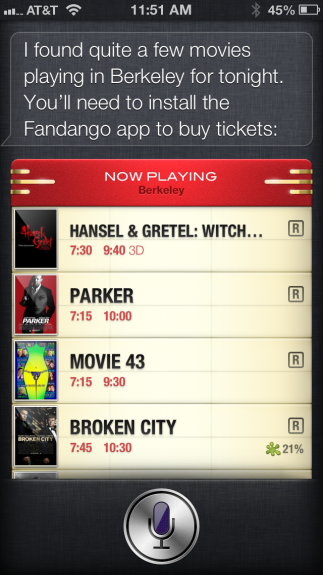 You’ll need the Fandango app to use Siri’s new feature.

The virtual assistant uses Fandango to acquire the tickets. As someone who rarely does this from a phone, or really, from a computer, I didn’t have Fandango installed when I tried to find tickets this morning. As Siri noted, you must have the Fandango application installed in order to take advantage of Siri’s new capabilities. Silly me.

Once I installed the app, it worked much better. Now, instead of just pestering Siri with movie times, as I’ve done once or twice in the past, now I can pester her with requests to purchase movie tickets. The service is seamless and works as advertised. Even if I don’t end up using it, I can’t ask for much more.

As someone who rarely uses Siri or goes out to the movies, I can’t say that this is going to bring me back into the fold, but it seems extremely useful for moviegoers who want to avoid a lot of the hassle of buying tickets.

Now, when using Apple Maps, users really don’t have an excuse not to report a bug to Apple.

I still use a combination of Apple Maps and Google Maps on my iPhone 5 as I like certain things about both of them. That said, I’d definitely like to see an improvement in both applications including Apple’s Maps. And luckily, Apple has made that a lot easier. 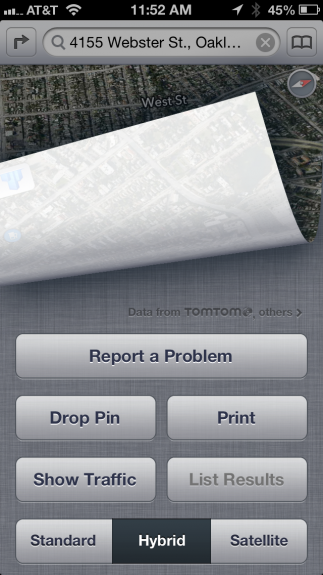 Report a Problem is not prominently featured in iOS 6.1

In Apple Maps, there is now a prominent button to ‘Report a Bug’ to the company. Whereas the button was virtually hidden before, it now resides at the very top of the menu when you pull the little tab up from the bottom right hand corner.

I haven’t seen any glaring ones for awhile, the major ones that I saw have been fixed by Apple, but there surely are still some issues floating around the highly criticized application. That said, Apple wants to improve it and those that wish to help it do so can now do so very easily.

Another feature Apple has included are new lockscreen music controls. We’ve known that these would be coming for quite awhile now and they are finally here.

Obviously they aren’t anything groundbreaking, they essentially just line up the controls with the controls found in the Music application, but they are useful nonetheless and look a whole lot better than the previous controls.

As someone who often uses public transportation, any improvement to my mobile music experience is fantastic and I really like what Apple has done here. 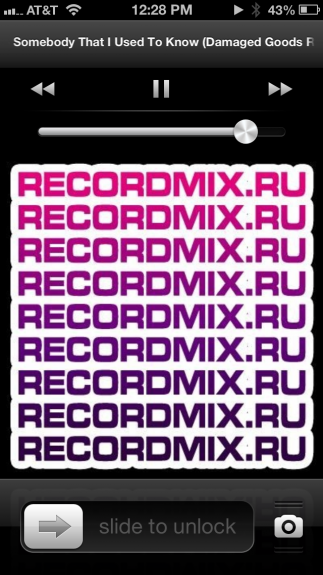 For those wondering what on earth I am talking about, double tap the home button on the lockscreen while playing music and controls will pop up toward the top of the screen.

After iOS 6.0.2, I thought that my Wi-Fi issues were over. And for the most part, they have been non-existent. However, every so often, while on my home WPA2, I’ve had my connection die on my iPhone 5 for whatever reason. I am still not sure if this a router issue, though other devices worked fine including my iPad, or one with iOS.

I know others have been complaining about non-existent or poor Wi-Fi, even after iOS 6.0.2, and so far, everything appears to be normal with iOS 6.1. My Wi-Fi connection is strong, maybe stronger than before, and I haven’t had any weird, or quirky issues pop up yet.

Again, I’ve only used the software for a few hours so we may see some issues pop up in the next few days, but thus far, the connection is stable and strong.

So Far, No Random Reboots

Another issue I’ve been having since the release of iOS 6 and its subsequent releases is a random reboot issue that pops up, often when I am using iMessage.

Since I bought my iPhone 5, I’ve been seeing my iPhone reboot at random times for no apparent reason. More often then not, I am checking an iMessage and I’ll be taken to a black screen, then the boot up Apple logo, then back to my lock screen. It all happens within 10 seconds or so and while not a huge issues, it’s still frustrating.

After installing iOS 6.0.2, I got a reboot right off the bat. With iOS 6.1, that hasn’t been the case. Obviously, because it’s a random occurrence, I have no idea when I might see it occur but my hope is that iOS 6.1 has taken care of it. 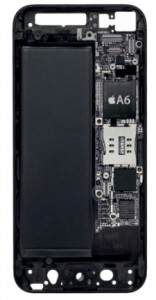 Apple’s iOS 6.0.2 update seemed to wreck havoc on the battery life of iPhone 5 owners. Fortunately, I was spared and my iPhone 5 has been performing marvelously from a battery standpoint.

So I can’t necessarily speak to whether or not iOS 6.1 fixes the battery life issues from iOS 6.0.2 because I never had any issues in the first place. One thing I can say is that so far, iOS 6.1 does not eat up the iPhone’s battery life, something that should help those that are teetering on the fence about whether to install it or not.

Those that may be experiencing battery life issues might want to check out our tips on improving iPhone 5 battery life.

Should You Install iOS 6.1?

In my opinion, those with an iPhone 5 should not be scared of downloading the iOS 6.1 update. It doesn’t appear to have any nasty bugs on board, it has the potential to fix issues that people may have encountered with previous versions, and it even adds some nifty features to boot.

The iOS 6.1 update is, so far, a great addition to the iOS family of updates.

Those that wish to jailbreak their iPhone 5 should also be safe to download iOS 6.1 but make sure not to download it Over-the-Air. Instead, users should install, but do it on a computer. It’s a little unclear as to why but two of the four developers of the iOS 6.1 jailbreak say to do it this way.

If you’ve installed it, how is iOS 6.1 treating your iPhone, iPad or iPod touch?